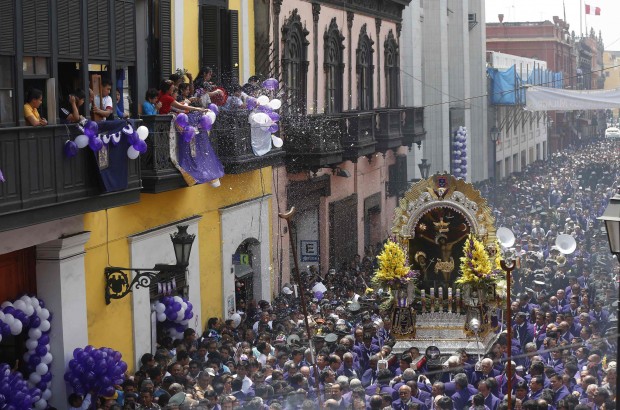 A replica of Peru's most revered religious icon, the "Lord of Miracles," is carried during a procession in Lima Oct. 18. The procession, which draws the largest gathering of believers on the continent, can be traced to the colonial era. (CNS photo/Janine Costa, Reuters)

CUSCO, Peru (CNS) — When Jose Venero Villafuerte was 5 years old, his mother took him to see the statue of Our Lord of the Earthquakes for the first time.

“In this moment my path to God was opened,” said Venero, now president of the Fraternity of the Our Lord of the Earthquakes. “I realized God existed.”

For the Mass celebrating the 475th anniversary of the Diocese of Cusco, Venero was in charge of the statue: dressing it, transporting it from the cathedral to the local coliseum, and decorating the truck.

About 8,000 people attended the Mass, and even more watched as the statue was transported through the town afterward.

Songs in Quechua and Spanish filled the massive coliseum Oct. 27 as people celebrated the church in Cusco, the first Catholic diocese in South America. About a dozen men dressed in colorful ponchos and hats blew into conch shells, and church bells rang. And local men called Pablitos, known for being disciplinarians, were invited to the Mass to keep order in the large crowd.

Many came to the Mass to see Our Lord of the Earthquakes, the patron saint of Cusco. During an earthquake in 1650, the image was taken from the Cathedral of Santo Domingo into the streets, abruptly stopping the earthquake. Usually the image is only removed from the cathedral on Monday of Holy Week, but the anniversary celebrations merited its inclusion in the procession.

After more than 300 years of devotion, smoke from candles and incense have colored the image black. Father Ernesto Cucho Dolmos, a history professor at the Seminary of San Antonio Abad in Cusco, said this makes the image more likeable and identifiable for the mestizo population of Cusco.

The Mass closed a four-day International Marian eucharistic congress, the heart of the 475th anniversary celebration.

Archbishop Juan Ugarte Perez and the retired archbishop of Quito, Raul Vela Chiriboga, appointed as the special papal envoy for the congress, concelebrated the Mass.

In his homily, Archbishop Vela elaborated on the importance of the Eucharist.

“It’s necessary and urgent for us to be conscious of our commitment to God by participating in the Liturgy of the Word and the Eucharist on Sunday, if possible with the entire family,” Archbishop Vela said. “God willing, this will be one of the fruits of this congress.”

In the days leading up to the Mass, about 500 priests, nuns and laypeople gathered for the congress, a series of workshops and speeches. Speakers came from Nicaragua, Colombia, Ecuador, Spain and Peru.

“We are blowing out 475 candles, and we are celebrating happily, mobilizing and awakening the faith in all of us,” Father Aparicio said.

Father Cucho said when looking at the past 475 years, the diocese did not seek to benefit only itself but also all of society. Spanish missionaries created the first church texts in Quechua and then Aymara and other native languages. The diocese constructed the first convent and seminary in South America. More than 15 archbishops have come from the seminary and served in Peru, throughout South America and in Spain, and hospitals were created for people from all social classes.

Father Cucho said the Catholic Church in Cusco may have its roots in Spain but, within a short time, it took on its own identity.

When Spanish evangelists arrived in Cusco, there was a cultural meeting of Andean culture and the Catholic Church. Father Aparicio said what resulted is “a marvelous cultural fusion,” seen in song, art, liturgy and how the Mass itself is celebrated.

After his days in Cusco, ArchbishopVela wrote in a letter to the city: “It makes me happy to find a living church that cares, prays and calls on the Lord, that wants to testify now just as in the beginning, since the creation of the church in Cusco, the mother of all churches in South America.”

Men carry a replica of Peru’s most revered religious icon, the “Lord of Miracles,” during a procession in Lima Oct. 18.

NEXT: Holy Father prays for victims of Hurricane Sandy