US bishops, at synod, talk of spirit and practice of evangelization 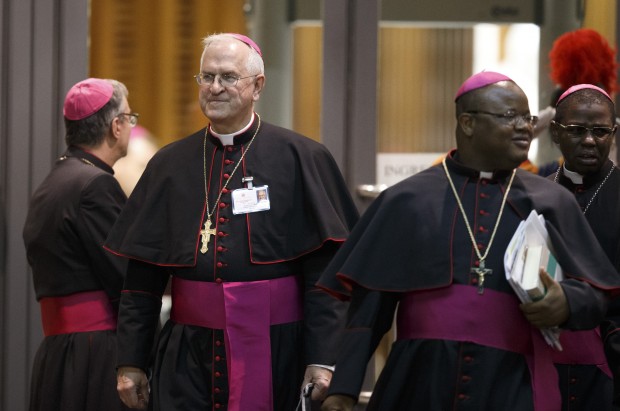 Archbishop Joseph E. Kurtz of Louisville, Ky., second from left, leaves a meeting of the Synod of Bishops on the new evangelization at the Vatican Oct. 10. (CNS photo/Paul Haring)

VATICAN CITY (CNS) — Charitable works, rites of passage and the cultural mixing produced by globalization all offer opportunities for bringing lapsed Catholics back into the fold, but success in such efforts depends on personal repentance and collective inspiration, U.S. bishops told a Vatican gathering Oct. 9.

On the second working day of the world Synod of Bishops on the new evangelization, five U.S. bishops addressed the spiritual conditions and the practical means of reaching out to baptized Catholics who have drifted away from the faith.

“Globalization presents us with a providential moment for advancing the church’s mission of transforming humanity into one family of God,” Archbishop Jose H. Gomez of Los Angeles told Pope Benedict XVI and the assembly of bishops, religious superiors, official observers and experts in the Vatican’s synod hall.

However, the archbishop said, the fusion of cultures resulting from the integration of the world economy requires “new methods and new ways to help the men and women of our times to practice their faith.”

“We need to find the ‘language’ that best presents the traditional means of sanctification — the sacraments, prayer, works of charity — in a way that is attractive and accessible to people living in the reality of a globalized, secular, urban society,” Archbishop Gomez said.

Bishop Gerald F. Kicanas of Tucson, Ariz., called on the synod to “strongly and unequivocally affirm that justice and charity are at the heart of evangelization.”

“Witness touches hearts, witnesses change hearts,” he said, offering the examples of Catholics renowned for their charity, including Blessed Teresa of Kolkata, St. Damien and Mother Marianne Cope of Molokai, who will be canonized Oct. 21.

Seeing Catholics who imitate such models, Bishop Kicanas said, “people who have never known the church or who have walked away might be moved to say, ‘I want to be part of that family that does so much good in the name of the Lord.'”

Bishop Joseph E. Kurtz of Louisville, Ky., used his allotted time of five minutes to speak about the value of parish activities and observances, particularly the Rite for the Blessing of a Child in the Womb, which he originally proposed in 2008, and which the Vatican approved last December for use in the United States.

“This sacred gesture is both a positive and hope-filled way to announce to society the great gift of human life as well as a gracious invitation for the parents to begin steps for the baptism of their child, once born,” the bishop said.

Cardinal Timothy M. Dolan of New York focused on “conversion of heart and repentance” as prerequisites for evangelization.

“The answer to the question ‘What’s wrong with the world?’ is not politics, the economy, secularism, pollution, global warming — no,” he said.

Quoting the English Catholic writer G.K. Chesterton, Cardinal Dolan said: “The answer to the question ‘What’s wrong with the world?’ is two words: ‘I am.'”

Hence the importance of going to confession, a practice that the cardinal said has largely disappeared in recent decades.

“The sacraments of initiation — baptism, confirmation, the Eucharist — charge, challenge, and equip the agents of evangelization,” Cardinal Dolan said. “But the sacrament of reconciliation evangelizes the evangelizers.”

Archbishop Gustavo Garcia-Siller of San Antonio called for a spiritual transformation of the whole church, which he described as a “church with struggles.”

In order that “Christians go forward with the new evangelization, we need a new Pentecost,” the archbishop said, and proposed to the assembly “that this synod humbly ask the Holy Father to consecrate the world to the Holy Spirit.”

NEXT: Head of Legion of Christ, Regnum Christi hands powers to vicar general