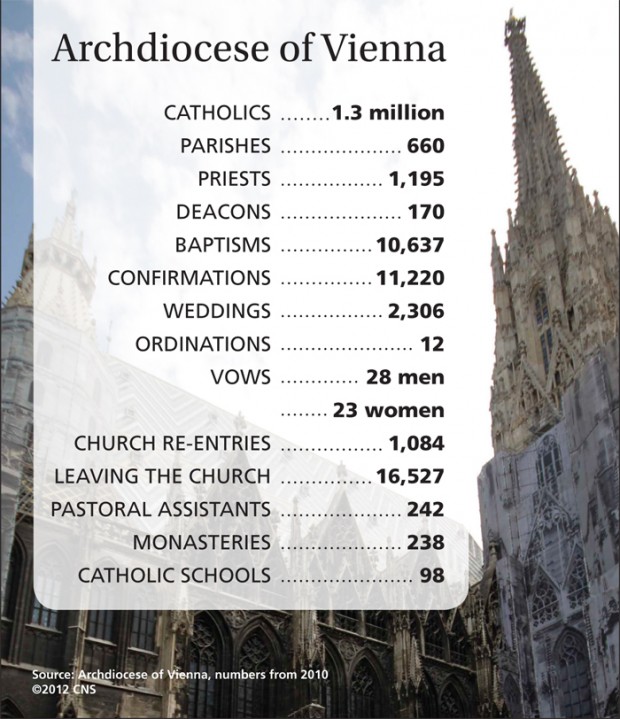 There were 1.3 million Catholics and 660 parishes in the Archdiocese of Vienna in 2010. The archdiocese plans to reduce its parishes by more than 75 percent over 10 years. (CNS graphic/Emily Lockley)

WARSAW, Poland (CNS) — Austria’s Vienna Archdiocese will press ahead with a major reorganization that will including liquidating most of its parishes over 10 years, despite objections from some local Catholics.

The archdiocese’s 660 parishes will be merged over the next decade into around 150 larger parishes, each served by three-five priests and offering regular Masses.

“Our emphasis isn’t just on reorganizing the church, but on reinvigorating the missionary impulses of the entire Christian community,” said Michael Pruller, archdiocesan spokesman. “Although we can debate how best to achieve it, the plan’s main aim isn’t open to discussion.”

Pruller told Catholic News Service that falling numbers of clergy and laity had necessitated the changes. He said smaller affiliated communities within the parishes will be run by lay volunteers authorized to conduct the Liturgy of the Word.

Pruller said archdiocesan bishops would draft the new parish boundaries and steps for implementing the reorganization by Jan. 1.

He added experiences from Latin America, Africa and Asia suggested ordained priests were not needed “in every small town and village” and that larger parishes could be introduced “without losing the nearness of people to their church.”

“As society changes, the church has to change its old-fashioned practices and structures, too,” he said.

“The church’s mission of apostolate and evangelization isn’t just the responsibility of parish priests, but of the whole community of baptized and confirmed. If this reorganization creates more vibrant Christian communities, praying, celebrating Mass, conducting mission and helping the needy together, then it could offer a model for church reforms throughout Europe.”

Speaking in mid-September, after the reorganization was announced, Vienna Cardinal Christoph Schonborn said the reform would be the archdiocese’s biggest for two centuries and would mean “saying goodbye to much that has become dear to us.”

However, he added that the reorganization would help pool resources, reduce administration and “leave more time for evangelization.”

“This is about a new cooperation between priests and laity from their common Christian vocation,” the cardinal told the news conference, which was reported by Austria’s Kathpress news agency.

“We have to free ourselves of the traditional image that the church is present only where there’s a priest and stress the common priesthood of all baptized,” he said.

Pruller said the reorganization had been preceded by a “long consultation phase,” but could not be “discussed endlessly.”

He added that it would not alter the ratio of priests to lay Catholics and said other dioceses in France and Germany had also made “groundbreaking structural changes” and retrained their parish teams.

“It will be much more efficient and robust to have several priests working together, rather than priests left totally by themselves,” the spokesman said. “The local Christian communities will be counted on to take care of those needing help, such as the elderly, so that everyone can get to Mass.”

The reform was supported by several Austrian newspapers, including the mass-circulation Die Presse daily, which said in a Sept. 24 editorial it was “not only understandable but imperative” to centralize parish work.

However, a leading pastoral theologian and sociologist, Father Paul Zulehner, said the reform had been opposed by most Catholic respondents in an online survey, to be published Oct. 31.

“Although there were consultations, they weren’t held with the priests and laity who’ll be most affected — this isn’t a good way to restructure an archdiocese,” Zulehner told Catholic News Service.

The Austrian Priests’ Initiative, which currently claims 508 clergy members, pledged to resist the reorganization. A statement from the head of Austria’s lay Catholic “We Are Church” group, which has campaigned for changes since 1995, said it doubted downsizing would facilitate greater lay participation.

Austria’s 12,800-member Lay Initiative association also dismissed the reorganization as “an evasive maneuver to avoid necessary reforms” and “maintain the power of clergy.”