For a century, parish brings a taste of Italy to Conshohocken 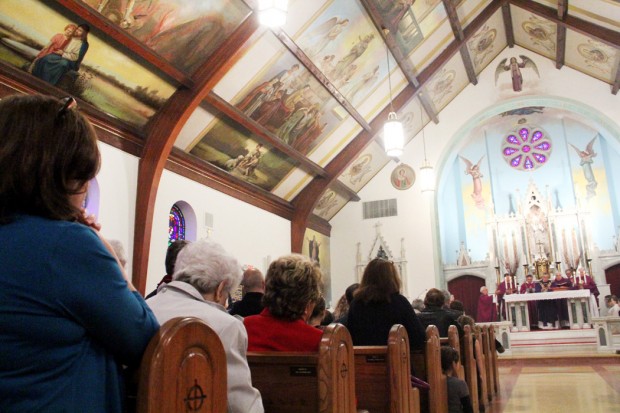 How did it happen that an Italian personal parish founded a hundred years ago in Conshohocken took the name SS. Cosmas and Damian, which honors twins who are believed to have been born in Arabia and martyred in Syria in the early 4th century?

The reason is most of the founding parishioners were from Isernia, in Italy’s Abruzzi region, and coming to America they named their church for their hometown parish. As a matter of fact Bishop Salvatore Visco of Isernia-Venafro recently sent them a relic of their patron saints in honor of the centennial.

When the parish was founded in 1912 the first worship site was at the Opera House on Fayette St. A little church that seated about 100 was constructed the following year.

In 1926 the lower level of the present church was built by Father Nicholas Coscia, the founding pastor. The main church, where Archbishop Charles Chaput will celebrate the closing centennial Mass on Dec. 2, was completed by Father Victor Strumia in 1952.

An outstanding feature of the church is the beautiful murals that cover the entire ceiling. They are the work of parishioner Emanuel Utti, originally painted in the 1950s and recently restored by him. Utti’s art graces about 70 churches and in recognition of his contribution to liturgical art, a special papal blessing was presented to him at SS. Cosmas and Damian this year.

Father Strumia, who arrived in 1927, was pastor for 41 years, and in addition to completing the church he built the rectory and the school. The school, which was staffed by the Missionary Sisters of the Sacred Heart, now serves as the Conshohocken Catholic Early Childhood Center.

But of course it is people, neither art nor buildings, that are the real heart of the parish. As in many personal parishes, many parishioners have members for a very long time.

“I’ve been in the parish for 82 years,” said Deacon Armand Maresca, who started as an altar server when he was 9, was ordained deacon in 1987 and still serves his parish and opens the church every morning. 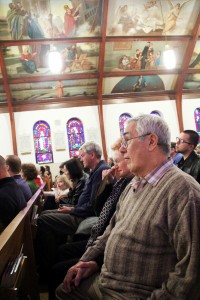 Back in the early days he recalls many of the families were immigrants, rather than descendants of immigrants as is the case today. While the September feast of SS. Cosmas and Damian is still a big celebration in earlier days it was huge.

“The Reading Railroad put on special cars to bring people,” he said. “They came from all over.”

Although SS. Cosmas and Damian parishioners have fond memories of all of its former pastors, the name of one usually comes up and that is Father Louis DeSimone (1968-1976), who is of course now retired Bishop Louis DeSimone. “Whenever he comes the Mass is crowded,” Deacon Maresca said.

Lucille DiPaolo, who is the SS. Cosmas and Damian historian, has only been a parishioner for 39 years but she too especially remembers Father DeSimone. But she also gives very high marks to Father Gaspar A. Genuardi, their current pastor, who arrived in 1991.  “He is very personable and approachable,” she said.

When Phyllis Mastrangelo arrived 52 years ago at age 19 she was already familiar with SS. Cosmas and Damian because it was the former parish of her mother, Susan D’Attore. What continues to strike her is the warmth of the parish, with everyone knowing everyone.

“Father Genuardi is wonderful. He wants people to get out of the Church everything they should,” she said. “He involves (people) in so many things – interfaith services; poor man’s supper during Lent, Thanksgiving service.”

Traditional devotions may not be as well attended as in past generations, but Mastrangelo still sees a lot of faith in younger parishioners. She and her husband are involved with Pre-Cana marriage preparation.

“We see young people care about their faith, they tell wonderful stories,” she said.

At this time SS. Cosmas and Damian Parish has about 950 families, Father Genuardi estimates. For this jubilee year each month was celebrated by a different event.

The parish has changed over the years in that it is no longer populated by mostly laborers. “It is more upscale now,” he said, “and it is still good people.”

Hospitality and healing are two hallmarks of the parish, and yes, being Italian, food is very much part of any gathering. Traditions are preserved through the annual celebration of the patron saints in September; there is the annual blessing of St. Anthony bread and the presentation of apples at Christmas.

“We have Meals on Wheels, Cursillo, RCIA and Kings Men,” the pastor said. “The parish is still vibrant.”