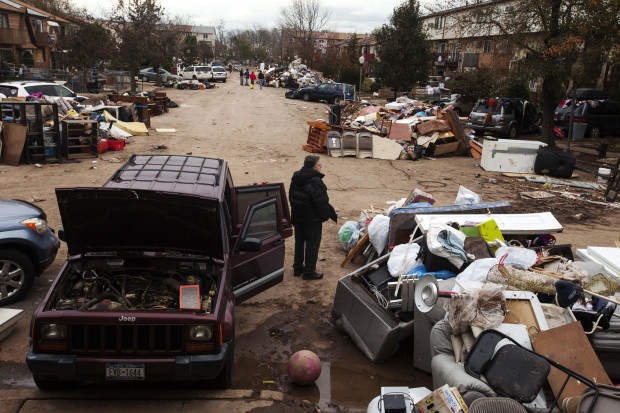 A man stands next to a damaged vehicle Nov. 1 as he surveys flood-damaged personal property thrown into the streets in the Staten Island borough of New York. The costs of recovery efforts after the widespread devastation and destruction caused by the super storm could be among the highest for any disaster in U.S. history. (CNS photo/Lucas Jackson, Reuters) 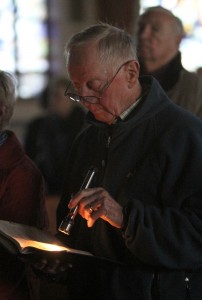 Harold Scott uses a flashlight during an early morning All Saints’ Day Mass at Sts. Philip & James Church in St. James, N.Y., Nov. 1. St. James was one of many communities on Long Island that remained without electricity three days after Hurricane Sandy swept through the region. (CNS photo/Gregory A. Shemitz)

NEW YORK (CNS) — The damage from the wind, rain and flooding brought by Hurricane Sandy “is almost overwhelming,” said Msgr. Kevin Sullivan, executive director of Catholic Charities of the Archdiocese of New York.

“We’re reaching out to parishes and getting them to directly assist those in critical need — they know their own people and their neighborhoods,” he told Catholic News Service Oct. 31.

Several Catholic agencies and religious communities have stepped forward to address the greatest needs of victims of the super storm.

“Reaching out to parishes and other communities and neighborhoods is imperative at this point,” Msgr. Sullivan explained. “The response on the parish level has been tremendous. We’re also working very, very closely with several municipal, state and private agencies, including Red Cross, to figure out the best way to respond to this disaster.”

When New York state and New York City were preparing for Sandy’s unprecedented onslaught, emergency responders had met with Msgr. Sullivan and Catholic Charities to plan how to best utilize its resources and personnel after the storm.

“We’ve been in conversation with dozens of governmental agencies and made sure we put our staff in place. We have a lot of social work case managers who are trained to deal with emergencies like this,” the priest said.

“They know how to get greater access to available services to those in need,” he said. “Many people suffering through disasters fall through the gaps. Our staff is in place to make sure that doesn’t happen. We found this is the best way to work with victims in this situation.”

Sandy, which made landfall in New Jersey Oct. 29, caused flooding, power outages, downed trees and other calamities over a large swath of the East Coast and into the Midwest. As of Nov. 1, the U.S. death toll from the storm stood at 74 people and more than 5.6 million homes and businesses were still without power.

Cleanup and repair in New York City were going forward after the storm, but only so much could be done with more than 500,000 New Yorkers living without electricity and without the use of the nation’s largest subway system.

A chief concern for Catholic Charities is making sure that services to the people it already serves on a daily basis continues unabated especially its year-round services to the homeless, children, the poor, the elderly, infirmed and disabled.

“Those who needed it were evacuated to shelters to better care for them. Sometimes there were public facilities and sometimes our own in areas unaffected by Sandy,” the priest said. “Those who are most vulnerable need the most care especially those with physical and emotional challenges. Where necessary, they are evacuated to safer situations.”

“We are coordinating by parishes, but the Holy Spirit is doing most of the coordinating,” Msgr. Sullivan said with a chuckle. 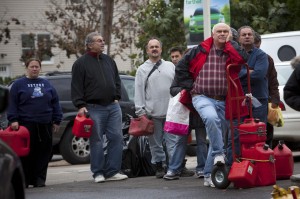 People line up for fuel on a street corner Oct. 31 in Staten Island, N.Y., in the aftermath of Hurricane Sandy.The costs of recovery efforts after the widespread devastation and destruction caused by the super storm could be among the highest for any disaster in U.S. history. As of Nov. 1 the death toll for Sandy stood at 74 in the United, one in Canada and 70 in the Caribbean. (CNS photo/Andrew Kelly, Reuters)

In addition to the assistance Catholic Charities is providing, he urged lay Catholics to “reach out to their neighbors on a one-to-one basis. We are grateful for all our parishioners who are reaching out to those in need, driving neighbors to shelters and just checking up on people.”

“If they’re capable, they should volunteer at shelters. They can make contributions and, above all, they can pray. There’s a lot of need. There are a lot of people who are hurting especially because of the power outages.”

Msgr. Sullivan said Catholics “are concerned and those who are capable of lending a hand are doing so.” He told of a parishioner at St. Augustine in Ossining in Westchester County, north of New York City, “who is organizing other parishioners in going door-to-door to check up on their neighbors and the elderly in the town making sure they have everything they need.”

“Our staff has already visited 17 of Staten Island’s 35 parishes,” the priest said. “There’s tremendous need out there and throughout New York City. In fact, we’re working closely with United Jewish Appeal and the Federation of Protestant Welfare Agencies in making sure those in need are served.”

In addition to Catholic Charities, other Catholic organizations are offering disaster relief to storm victims, including the Knights of Malta.

The Knights have “traditionally offered emergency aid, assistance, relief to those in need. We usually assist in Africa and other impoverished areas around the world just like Red Cross does,” said police Sgt. Angelo A. Sedacca, 41, a Knight of Malta since 2006. “Now we’re needed here in New York City in the aftermath of Sandy.”

He expected that by Nov. 2 “we’ll have a better idea of what we in the Knight community are doing in response to this disaster.

“A Knight must always be mindful of “making sacrifices to help others, never saying ‘no’ to those in need,” he told CNS.

Sedacca, his wife and their four children are members of Our Lady of Lourdes Parish in the New York borough of Queens, in the Brooklyn Diocese.

“This is the secret of life: putting God first, others second and myself last,” the sergeant added. “This emergency is exceptional. I’ve never seen anything like this but with God’s grace and love, New Yorkers will get through it.” 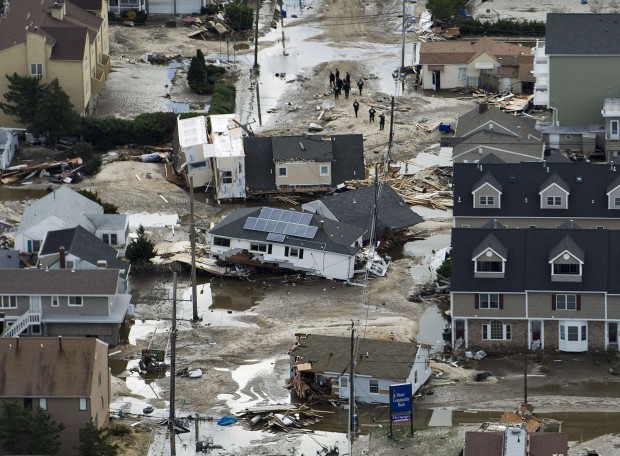 n aerial view shows destroyed homes Oct. 31 after Hurricane Sandy came ashore in Seaside Heights, N.J. Recovery efforts after the widespread devastation and destruction caused by the super storm could be among the most expensive in United States history. Sandy has claimed at least 40 lives in the United States as of Oct. 31 and one death in Canada. (CNS photo/Steve Nesius, Reuters)