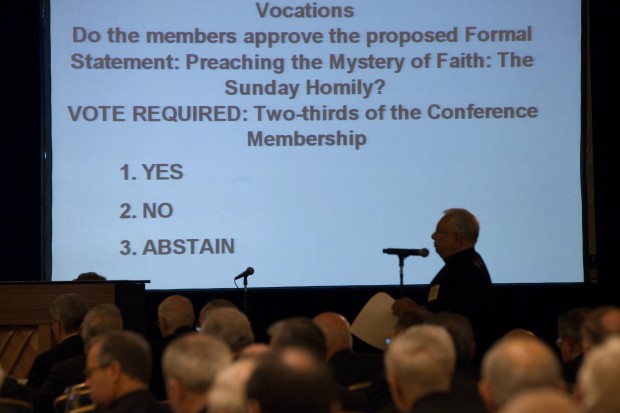 BALTIMORE (CNS) — The U.S. bishops approved their first new document in 30 years on preaching Nov. 13, the second day of their annual fall general assembly in Baltimore.

The document, “Preaching the Mystery of Faith: The Sunday Homily,” encourages preachers to connect the Sunday homily with people’s daily lives.

The document was prepared by the USCCB Committee on Clergy, Consecrated Life and Vocations, chaired by Archbishop Robert J. Carlson of St. Louis, with subsequent review and comment by eight other USCCB committees.

During discussion on the document Nov. 13, the bishops accepted a plea from Bishop Ricardo Ramirez of Las Cruces, N.M., to include his amendment urging Catholics to make an extra effort to listen to the homilies of foreign-born priests for whom English or Spanish is not their first language.

Those priests’ speech “may have a heavy accent that the congregation cannot understand,” Bishop Ramirez said. “We have many foreign priests coming to work in our dioceses,” he added.

“Preaching the Mystery of Faith” also required a suspension of the rules governing consideration of proposed documents issued in the name of the USCCB, as bishops did not receive it at least 30 days prior to debate.

In formally introducing the document Nov.12, Archbishop Carlson said it aimed for a “pastorally sensitive tone” so that it could build upon a strong theological foundation for the ministry of preaching.” He added, “It also makes a strong case for linking the homily to the Sunday liturgy.”

Preaching needs to be done “more effectively in the context of the new evangelization,” he said. “Our people hunger for better preaching, preaching that would help them rediscover their faith.”

“The homily is intended to establish a ‘dialogue’ between the sacred biblical text and the Christian life of the hearer,” the document says.

“Preachers should be aware, in an appropriate way, of what their people are watching on television, what kind of music they are listening to, which websites they find appealing, and which films they find compelling,” it adds. “References to the most popular cultural expressions — which at times can be surprisingly replete with religious motifs — can be an effective way to engage the interest of those on the edge of faith.”

The intent to write a new document first surfaced six years ago as the silver anniversary neared of the U.S. bishops’ last preaching document, “Fulfilled in Your Hearing.”

The work of drafting “Preaching the Mystery of Faith” took place over the past year and a half after work was approved on such a document at the bishops’ spring 2011 meeting in Bellevue, Wash., near Seattle. New traction on the document came after Pope Benedict XVI issued the apostolic exhortation “Verbum Domini” (“The Word of the Lord”) two years ago, and “Preaching the Mystery of Faith,” according to Archbishop Carlson, is rooted in “Verbum Domini.”

“Many Catholics, for a variety of reasons, seem either indifferent to or disaffected with the church and her teaching. We know that the general social context in the United States has a strong emphasis on the individual and individual choice, which often eclipses the sense of community or of the common good that is essential to Christian life,” the document says. “Sadly, too, we must confess that the sexual abuse crisis has wounded the church, and this scandal has led some Catholics to lose heart and leave the church.”

It adds, “The homilist of today must realize that he is addressing a congregation that is more culturally diverse than previously, one that is profoundly affected by the surrounding secular context and, in many instances, inadequately catechized.”

“Virtually every homily preached during the liturgy should make some connection between the Scriptures just heard and the Eucharist about to be celebrated,” it says.

Before preaching, “the homilist may need to wrestle for a while with the challenging aspects of the biblical Word, searching for ways it could connect to ordinary experience and how it might be proclaimed to the congregation the homilist serves,” it says.

“Then comes the process of drafting the homily in a thoughtful manner, finding the right words, moving examples, and apt metaphors that will bring home to the listener the beauty and truth of the Scripture — and then reviewing and revising the text of the homily until it is ready,” it continues. “Good homilists often practice their homily ahead of time, hearing how it sounds out loud and seeking to preach it with passion and strength.”

“Preaching the Mystery of Faith” says: “The ultimate goal of proclaiming the Gospel is to lead people into a loving and intimate relationship with the Lord, a relationship that forms the character of their persons and guides them in living out their faith. … An effective homily would show the faithful just how much the Son of God loved them in taking our human flesh upon himself.”

At a Nov. 12 news conference, Archbishop Carlson said that, in addition to review by other USCCB committees, there were times he went to “the back of the church” to hear what congregants said about the preaching they had just heard at Mass. Further, when a Catholic News Service story was published about the writing of “Preaching the Mystery of Faith,” “we got a lot of comments in the mail” from readers of the article, he said.

NEXT: Tree from devastated New Jersey heading to Rock Center