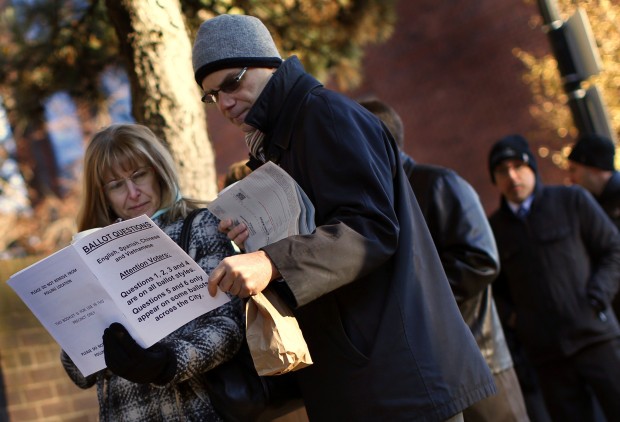 In California, an initiative to end the use of the death penalty was defeated as well in another close vote.

The Massachusetts initiative, known as Question 2, was defeated by fewer than 39,000 votes — 1,395,227 to 1,356,899 — with the largest opposition rising in counties in the center of the state and those north and south of Boston.

Cardinal Sean P. O’Malley of Boston was pleased with the outcome, saying the common good was served in the measure’s defeat.

“The campaign against physician-assisted suicide brought together a diverse coalition from medical, disability rights and interfaith communities, all dedicated to ensuring that our residents were well informed on the issue,” he said in an emailed statement.

The cardinal called upon wider society to work with hospice organizations and palliative care providers “to improve the care provided to the terminally ill.”

“It is my hope and prayer that the defeat of Question 2 will help all people to understand that for our brothers and sisters confronted with terminal illness we can do better than offering them the means to end their lives.”

The measure may have generated the widest debate of any statewide ballot issue in the country. The initiative would have allowed terminally ill adults to commit physician-assisted suicide under certain conditions.

Under the proposal, patients estimated to have six months or fewer to live and judged medically capable to make a medical decision could decide to end their lives after submitting such a request twice orally and once in writing.

In video and written messages on the Massachusetts Catholic Conference website, Cardinal O’Malley urged voters to reject the measure, saying it would place vulnerable people at risk and that it promotes suicide.

Catholics and right-to-life leaders argued against the measure and also pointed to what they considered to be several flaws in its wording. In particular, the church raised concerns that the measure did not require that a doctor be present when a terminally ill individual administers a deadly dose of drugs once the medication is prescribed and that there was no requirement for an individual to notify family members of his or her intent.

In opposing the initiative, the Massachusetts Medical Society maintained that “physician-assisted suicide is fundamentally incompatible with the physician’s role as healer” and that “the proposed safeguards against abuse are insufficient.”

California voters rejected Proposition 34, which would have repealed the death penalty clause in the state constitution, by 52.8 percent to 47.2 percent. Inmates already facing a death sentence would have been resentenced to life in prison without parole under the measure.

Ned Dolejsi, executive director of the California Catholic Conference, which had backed the proposition, expressed disappointment in the outcome in an interview with Catholic News Service Nov. 7.

“The Catholic bishops felt this was a good moment for the people to reflect on the use of the death penalty and how … it’s an expensive and rather useless exercise of state power,” Dolejsi said.

“We wanted to present this to the people of California and wanted them to engage the issues and challenge the death penalty,” he said.

Opponents, including law enforcement officers and three former governors, maintained that the savings estimates were overblown and that the state’s onerous death penalty system is in need of repair and should not be replaced.

In backing the capital punishment ban, California’s Catholic bishops maintained that the inherent dignity of each person must be upheld and that even people convicted of any serious crime must not be put to death. The church also called for wide-scale restorative justice efforts to afford the opportunity for repentance and reconciliation among the affected individuals.

The ban received widespread support in the state’s most populous areas, including the San Francisco Bay area and Los Angeles, but lost handily in San Diego and outlying counties across the state.

The sting of defeat felt by Dolejsi and the bishops was partially offset by the passage of Proposition 35, which would impose harsher fines and prison sentences on human traffickers as well as require convicted traffickers to register as sex offenders. The measure was approved by 81.1 percent of voters.

In Florida, voters defeated an amendment to the state constitution that would have prohibited public funding of abortion services or insurance coverage that covered abortions and also would have allowed legislation to restore parental consent for a minor less than the age of 16 to have an abortion.

Amendment 6 failed, by a 55 to 45 percent margin. Overall, 4.2 million rejected the amendment while nearly 3.5 million supported it. An additional 200,000 absentee ballots remained to be counted early Nov. 7.

A second constitutional amendment that would have lifted a ban on public funds going directly or indirectly to any church or religious denomination for the delivery of social services also was defeated by a similar margin, 55.5 percent to 44.5 percent. The tally on Amendment 8 pending the absentee outcome showed 4.2 million voters opposed to it and 3.4 million in favor of it.

Floridians also blocked by 51.5 percent to 48.5 percent an amendment that was aimed at limiting the impact of the Affordable Care Act. Amendment 1 would have prevented the adoption of laws or rules that compelled any person or employer to purchase, obtain, or provide health care coverage.

In Montana, voters approved by more than 2-1 a referendum that would require parental approval of a minor child’s abortion.

Montanans also favored a referendum to deny some state-funded services to undocumented residents by 79 percent to 21 percent and chose to prohibit the state or federal government from mandating the purchase of health insurance, 67 percent to 33 percent.

And in Puerto Rico, a majority of voters — 54 percent to 46 percent — approved a nonbinding referendum that would make the Caribbean island the 51st U.S. state.

However, Congress must approve such a step. President Barack Obama pledged to uphold such a vote if approved by a “clear majority” of Puerto Ricans.

Puerto Rico is a U.S. territory. While residents are U.S. citizens, they cannot vote in presidential elections.