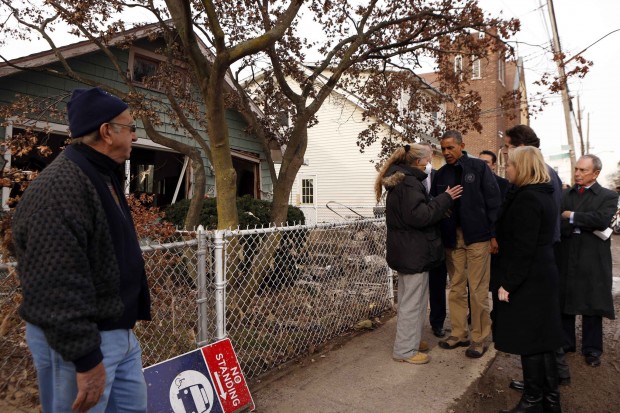 TRENTON, N.J. (CNS) — In the weeks since Hurricane Sandy waged a relentless 48-hour assault along the mid-Atlantic shoreline, carving a swath of devastation throughout and beyond the four-county Diocese of Trenton, the Catholic community has answered back in faith and solidarity.

“Priests and parishioners, first responders and volunteers, community leaders and ordinary citizens, old and young alike have reached deep into their hearts and souls to care about and for one another,” Trenton Bishop David M. O’Connell said in a reflection published in The Monitor, the diocesan newspaper. (Read the full reflection here.)

“I believe it is the grace of our Lord Jesus Christ alive and at work in our diocese,” he said about response to the need created by Sandy.

The Trenton Diocese’s two shore counties — Ocean and Monmouth — suffered some of the worst devastation, mobilizing hundreds of thousands of people into relief work on behalf of the victims and bring them together to proclaim their unwavering belief that there is always hope with God.

Even as their own power was gone, communications crippled and staffs suffering staggering personal losses of homes and property, dozens of shore parishes opened their doors to serve as shelters from the storm, to share food and warmth where it could be found, and to partner with groups like the Red Cross and local fire departments to collect desperately needed items for local residents.

On Nov. 15, the diocese’s Department of Pastoral Care announced it would host a “day of consolation” Dec. 8 for those in bereavement ministry and for those affected by hurricane Sandy.

Over the Nov. 17-18 weekend, at the direction of Bishop O’Connell, a diocese-wide collection was taken at all Masses to raise money for the relief effort.

After Sandy made landfall in New Jersey Oct. 29 and swept through the Northeast, Bishop O’Connell had established a diocesan hurricane relief effort by mid-afternoon Nov. 2.

He called for the establishment of diocesan distribution centers in parishes and Catholic social service installations to provide people most seriously impacted by the storm with the resources they need to survive in the short-term and begin to explore what will be needed in the long-term.

As recovery efforts began, Bishop O’Connell visited as many priests and churches in area that had become known as “ground zero” as he was permitted to during a tour escorted by the New Jersey State Police. He visit hurricane relief centers in Monmouth County, celebrated Mass Nov. 4 at St. Rose Church for the throngs who overflowed the darkened church that day.

A day earlier, speaking from the bustling relief center at St. Benedict Church in Holmdel, Bishop O’Connell encouraged all who were struggling with the effects of the storm’s devastation to remain calm and pledged the ongoing support of the Catholic community.

“God bless you, we love you and whatever we can do to help you we will,” he said.

His recurring message to his people was that when they believe in God, no measure of adversity can destroy them.

Through it all, Bishop O’Connell has lauded the resilient spirit of the people he met. He marveled at their willingness to help one another, their determination to pick up the pieces and rebuild, and most importantly, their devotion to God.

He recalled meeting Carol DeBartolo, president of the St. Rose Parish Conference of the Society of St. Vincent De Paul, and several other women who were getting the relief effort organized in that parish. The women shared with the bishop a new saying in their little town: “Everyone’s safe. Just no power.”

Bishop O’Connell writes of women like these in his reflection, saying, “Difficult times often bring out the very best in people and that has clearly been the case along coastal New Jersey in the wake of this storm.

Bennett is associate publisher of The Monitor, newspaper of the Diocese of Trenton. Contributing to this story were members of the Monitor staff.

PREVIOUS: In Boston, 288 parishes to share limited resources in 135 ‘collaboratives’