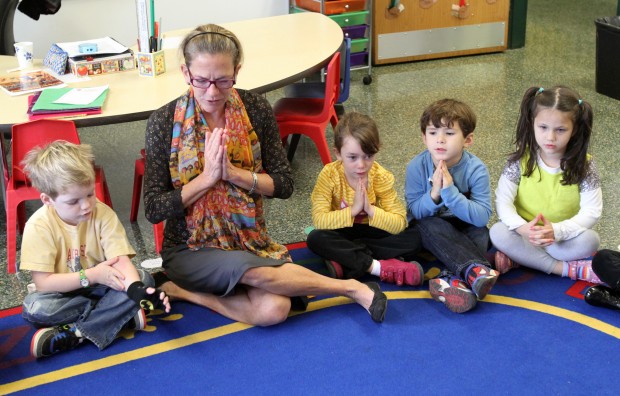 Pre-kindergarten teacher Patricia Batus prays with her students at Long Beach Catholic Regional School in Long Beach, N.Y., Nov. 15. Classes resumed at the school Nov. 14, more than two weeks after it was closed when Hurricane Sandy caused severe destruction to Long Beach and other communities in the Northeast. (CNS photo/Gregory A. Shemitz, Long Island Catholic)

NEW YORK (CNS) — Father Donald Baker is really impressed by how young Catholics have really stepped up to help those affected the most by Hurricane Sandy.

“The ‘millennials,’ those young people in the neighborhood who are in their 20s — who’ve become adults since the millennium — have been outstanding — absolutely incredible,” said the 52-year-old pastor of St. Teresa Church in New York City’s gritty Lower East Side.

“They truly embodied the charity of Christ. I turn around and there are another dozen eager and willing to help our community,” he added.

The priest said the amount of damage done by Hurricane Sandy “was surreal.”

Right after the storm, which made landfall in neighboring New Jersey Oct. 29, “there were people trapped in cars that we had to rescue since the fire department couldn’t get down here right away,” he recalled in an interview with Catholic News Service. “It was astonishing. But it’s precisely moments like this when New Yorkers come together and work together. It’s really encouraging.”

Father Baker added: “The response from my parishioners has been amazing. I’m thankful at how well they stepped up to the task at hand.”

The hardest hit area of New York City is the borough of Staten Island. At least 43 deaths in New York were attributed to Sandy, with 23 of those in Staten Island. As it made its way through the Northeast, Sandy killed more than 100 people.

Most Manhattanites don’t expect “this level of disaster. This is Manhattan! Things like this don’t happen … but now we know what nature is capable of. There was a lot of water damage,” said Father Baker. “I still remember (thinking) I couldn’t have imagined that this was possible anywhere let alone in Manhattan.”

Father Thomas Faiola, a Capuchin Franciscan, said that the food pantry his order runs usually serves about 35 families a day, but at its peak after the storm, it fed at least 1,000 people.

He is pastor of another Lower Eastside church, Our Lady of Sorrows.

“The first Mass after Hurricane Sandy was completely done by candlelight,” he recalled. “It was actually beautiful but it reminded everyone who came to Mass of how badly affected we were.”

NEXT: In Boston, 288 parishes to share limited resources in 135 ‘collaboratives’