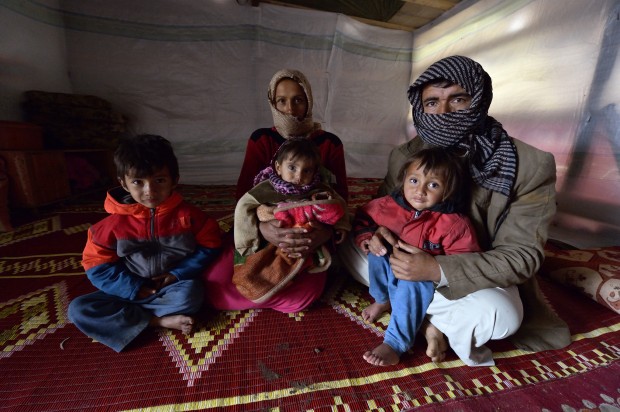 A refugee family from Syria, whose members asked not to be named because of fears about their security should they return to their home country, are pictured in a rented tent Nov. 22 made from a billboard canvas in the village of Jeb Jennine, in Lebanon's Bekaa Valley. No one is sure how many refugees from Syria have already arrived in Lebanon. (CNS photo/Paul Jeffrey) 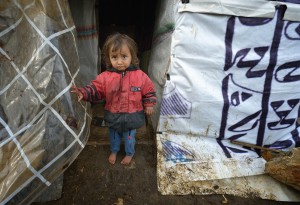 A refugee child from Syria stands outside a makeshift shelter in the village of Jeb Jennine, in Lebanon’s Bekaa Valley, Nov. 22. (CNS photo/Paul Jeffrey)

BEIRUT (CNS) — When Syrian refugees arrive in Lebanon, help begins with a phone call to the U.N. refugee agency — if they can get through.

In most refugee areas, the U.N. High Commissioner for Refugees has no fixed office; its staffers make only sporadic visits for which refugees make appointments over the phone. It’s that phone call that is the problem.

“We have called UNHCR several times, but they never answer the phone, and there’s no permanent office to go to,” said Ghaziya al-Houmaydan, a refugee who, six months ago, fled bombing in her hometown of Homs, Syria, and who now lives in a tent in the Bekaa Valley.

Hessen Sayah, project manager for Syrian refugees for Caritas Lebanon, the local church’s charitable agency, said she hears about the problem all the time.

“People call our Caritas hotline to ask for help with calling UNHCR, saying it’s always busy or no one answers. We tell them to call again. And we take their names to tell UNHCR about them, especially the most vulnerable or urgent cases, like people who need medical assistance,” Sayah told Catholic News Service.

“And once you get UNHCR on the phone, it can take up to two or three months to get registered,” she said. “But if a family has needs now, Caritas is here to help them.”

Sayah said she thinks the official number for Lebanon is too low.

“We can’t get an accurate count, because many are afraid to register. I think the number is at least double what the UNHCR says,” Sayah told CNS.

Many refugees are reluctant to register because of misconceptions about the implications.

“When we first arrived in Lebanon, people told us that if we registered, we wouldn’t be able to return home. We planned on returning, so we put off registration,” said al-Houmaydan, who acknowledges she received bad advice.

Sayah said some Syrian minorities, such as Christians and Kurds, are reluctant to register with the UNHCR.

“They’re afraid that if they register, their names will be given to Syrian security, or if the situation improves they will not be able to return. We can’t force them to do it, but we try to convince them that it’s better to be registered,” Sayah said.

On top of Syrian nationals who’ve been forced to flee to Lebanon and other countries, Iraqi and Palestinian refugees living in Syria also have fled the fighting. Caritas has helped them, too. It persuaded the government to grant longer visas to the Palestinians and has continued its work with Iraqi refugees in the region.

“Almost all the (nongovernmental organizations) here are involved in the Syrian refugee crisis, but Caritas isn’t neglecting the Iraqis,” she said. Like Syrian nationals, they get help from Caritas in the form of food parcels and coupons, cooking equipment, hygiene kits, baby kits, blankets, mattresses, children’s school fees and, as winter approaches, heaters and winterization kits to better seal their homes against the cold.

Caritas has a mobile clinic that tours the Bekaa Valley offering free consultations and medicines to all refugees. Its staff includes a gynecologist and a pediatrician.

Psycho-social support is also provided, Sayah said, especially for children who have been traumatized by the violence they witnessed. Caritas, which has years of experience working with migrants in Lebanon and is the only NGO present in Beirut’s infamous underground migrant detention facility, also keeps an eye out for women and girls who have been victims of human trafficking.

Logistically, it would be easier to monitor and provide services to many refugees if they were housed in a massive camp setting. That’s what the neighboring kingdom of Jordan has done in establishing the massive Zaatari refugee camp near Mafraq, where as many as 45,000 Syrian refugees are living, with more arriving every day.

But in Lebanon, the government has opposed the idea of big camps, in part because Lebanon’s political culture — with deep links to Syria’s political factions — is sharply divided over how to respond.

“There’s a power struggle in Lebanon, and nobody can agree on something like this,” said George Antoun, the Beirut-based Middle East regional director for International Orthodox Christian Charities. “Lebanon doesn’t control its borders, and it has a long and porous border with Syria. People fear a refugee camp might become a base for Syrian militants, or a place that could be attacked by a certain faction within Lebanon, and that would create conflict. It would be hard to prove who attacked the camp, and it could bring Lebanon back to civil war.”

Sayah said she’s not optimistic about the near future. The U.N. predicts Lebanon will have 300,000 Syrian refugees by June, but Sayah reiterated that she thinks the official numbers are too conservative.

Meanwhile, as more refugees flow in, the demand for living space and services is testing the country’s capacity to host them.

“These days you cannot rent a house, because the prices are increasing day by day. And even if you can afford it, it’s hard to find a place that’s available,” Sayah said. “Many families now coming to the Bekaa Valley are searching for agricultural land to rent where they can put up a tent. Or they’re moving in with families who have already built their tents. And many Lebanese families have welcomed Syrian families into their own homes. They’re not relatives, they’re just people in need, and they’ve been welcomed. But the welcome is wearing thin.” 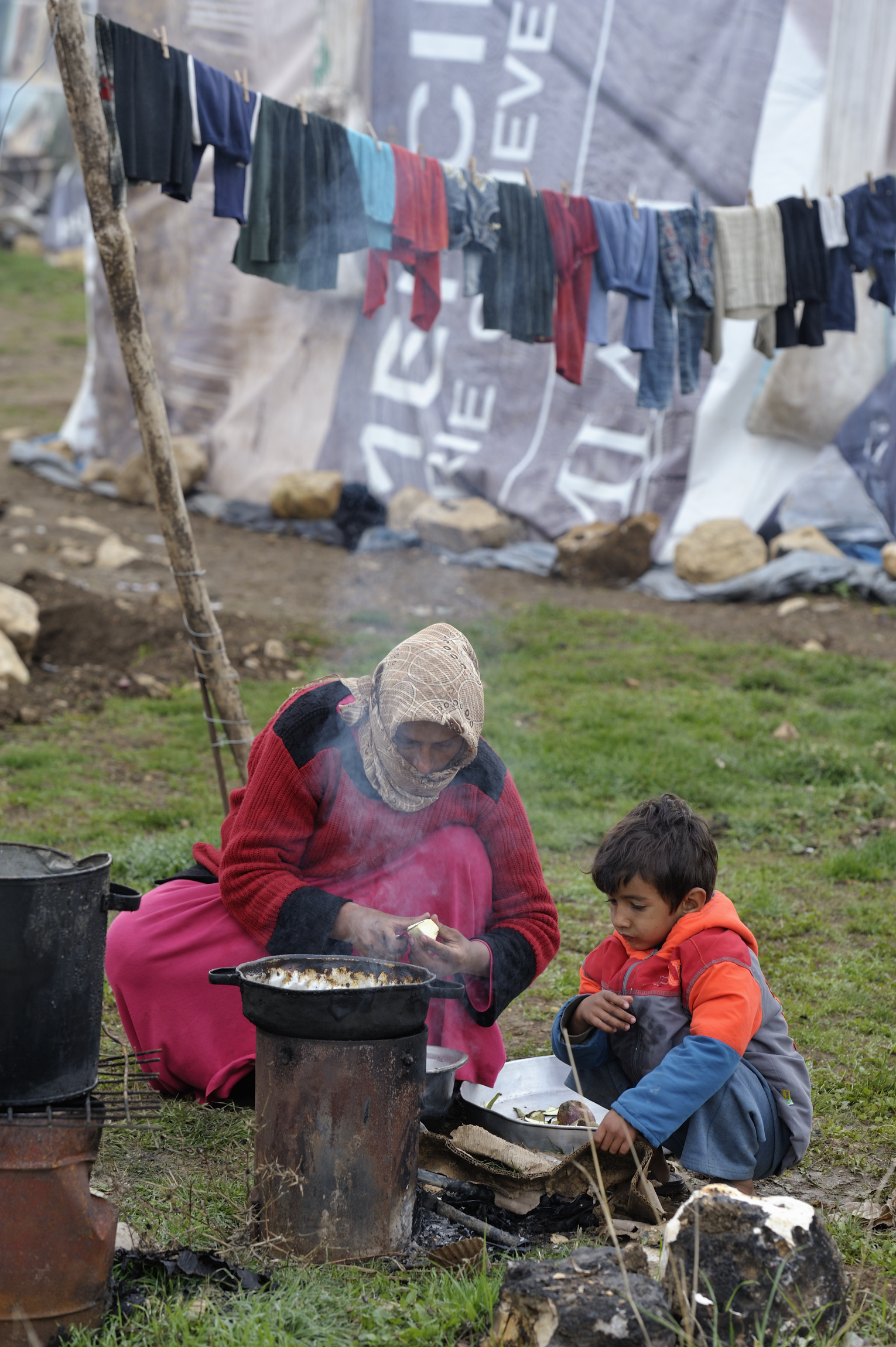 A female refugee from Syria prepares food for her family as her son helps her with the stove Nov. 22 at a refugee camp in the village of Jeb Jennine, in Lebanon’s Bekaa Valley. (CNS photo/Paul Jeffrey)