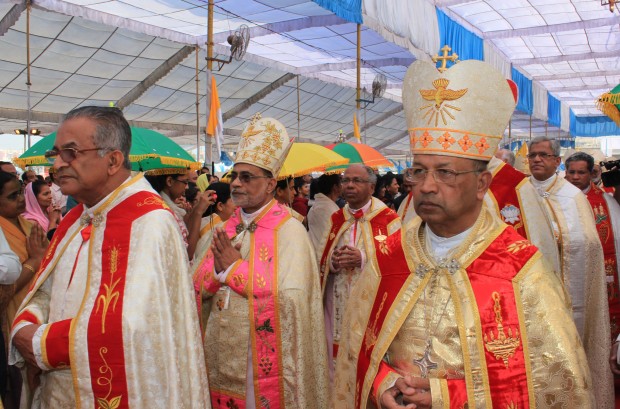 Clergy of the Syro-Malabar Catholic Church process at the start of Mass in a suburb of New Delhi Nov. 18 to mark the 50th anniversary of the church's first missionary venture. (CNS photo/Anto Akkara)

NEW DELHI (CNS) — The missionary zest and vibrancy of the Syro-Malabar Catholic Church was lauded at a celebration of the church’s first missionary venture.

“The Syro-Malabar church has contributed to not only the evangelization of India but outside,” said Archbishop Salvatore Pennacchio, apostolic nuncio to India and Nepal, at a public meeting Nov. 18 following a solemn Mass marking the 50th anniversary of the church’s missionary efforts.

“Thousands of your missionaries are in the service of the needy … sharing the wonderful legacy that started from St. Thomas,” Archbishop Pennacchio told more than 6,000 Syro-Malabar Catholics representing 30 dioceses from across India who flocked to New Delhi. “May the intercession of St. Thomas help you in your journey of faith here and abroad.”

The jubilee marked the establishment in 1962 of the Chanda Diocese, then a mission diocese under the self-governing Syro-Malabar Church. The church traces its history to St. Thomas the Apostle, who arrived on the shores of southern Kerala state in A.D. 52.

“I am a priest of the Latin rite. But today I am a Syro-Malabar Church priest,” he said.

Scores of women wearing traditional dress of Kerala and holding colorful umbrellas stood in line to welcome the 15 bishops and more than 100 priests for the Mass celebrated by Cardinal George Alencherry of Ernakulam-Angamaly, major archbishop of the Syro-Malabar Catholic Church.

Young children in their white first Communion apparel sprinkled flower petals as the clergy processed to the altar for the Mass in a sprawling temporary hall built in Dwaraka, a suburb of New Delhi.

During a Nov. 17 seminar on the “Role of the Syro-Malabar Church in Nation Building,” Msgr. Kozar credited Syro-Malabar Catholics for their missionary history and their zeal in promoting religious vocations.

“You are a church that not only talks about about lives out the mandate of the Pentecost,” he said.

The Syro-Malabar Church has more than 70,000 sisters and priests among its 4.2 million members across India.