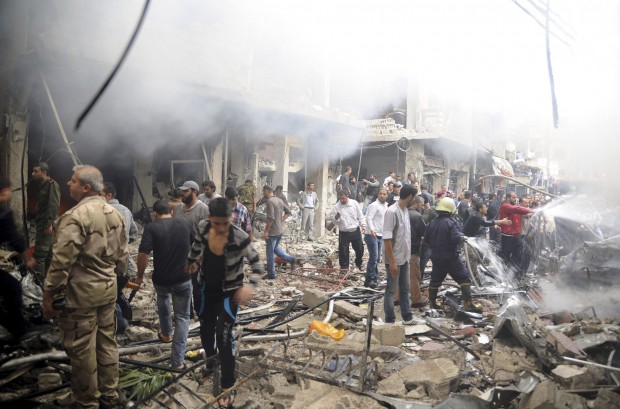 People survey the scene of a deadly bomb blast in Damascus, Syria, Nov. 5. Instability and increasing violence in Syria have prompted Pope Benedict XVI to cancel the planned visit to the war-torn nation by a delegation of cardinals and bishops. (CNS photo/SANA via Reuters)

VATICAN CITY (CNS) — Instability and increasing violence in Syria have prompted Pope Benedict XVI to cancel the planned visit to the war-torn nation by a delegation of cardinals and bishops.

Instead, the pope announced Nov. 7, he has sent a smaller group to Lebanon to deliver a $1 million donation and boost the church’s humanitarian response to the crisis.

The pope also appealed for dialogue to end the Syrian conflict, saying: “We have to do everything possible because one day it could be too late.”

“I renew my invitation to the parties in conflict, and to all those who have the good of Syria at heart, to spare no effort in the search for peace and to pursue through dialogue the path to a just coexistence, in view of a suitable political solution of the conflict,” Pope Benedict said at the end of his general audience in St. Peter’s Square.

“I continue to follow with great concern the tragic situation of violent conflict in Syria, where the fighting has not ceased and each day the toll of victims rises, accompanied by the untold suffering of many civilians, especially those who have been forced to abandon their homes,” he said.

He said he had hoped to send a delegation of three cardinals, three bishops and a priest to Syria during the world Synod of Bishops, which met for three weeks at the Vatican in October, to show solidarity with victims and encourage peace negotiations. The papal delegation to Damascus was to have included Cardinal Timothy M. Dolan of New York, who is chairman of the board of the Catholic Near East Welfare Association.

“Unfortunately, due to a variety of circumstances and developments, it was not possible to carry out this initiative as planned,” the pope said, “and so I have decided to entrust a special mission to Cardinal Robert Sarah, president of the Pontifical Council Cor Unum,” which promotes and coordinates Catholic charitable giving.

Together with Cor Unum’s secretary, Msgr. Giampietro Dal Toso, and Michel Roy, secretary-general of the Vatican-based umbrella group of Catholic aid agencies, Caritas Internationalis, Cardinal Sarah was to be in Lebanon Nov. 7-10, where he was to meet with priests, religious and lay representatives of Christian churches in Syria.

“He will visit a number of refugees from that country and will chair a meeting of Catholic charitable agencies to coordinate efforts, as the Holy See has urgently requested, to provide assistance to the Syrian people, inside and outside the country,” the pope said of Cardinal Sarah’s mandate.

The cardinal will deliver a $1 million donation made by participants in the Oct. 7-28 synod and the pope himself. The money is to provide humanitarian aid and support local churches in an effort to bring some relief to those hit by the crisis, Jesuit Father Federico Lombardi, Vatican spokesman, told reporters.

The papal delegation’s visit itself is also meant to “prompt all sides involved, as well as those who hold dear the good of Syria, to seek a just and peaceful solution to the conflict, Father Lombardi added.

Syria’s civil war has left thousands dead and has displaced hundreds of thousands of people since March 2011.

NEXT: CRS to work with Guatemalan partners after Pacific earthquake