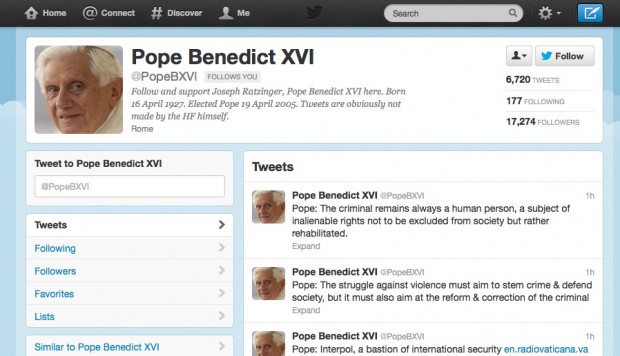 This is a screen capture of an unofficial Pope Benedict XVI Twitter feed. The Vatican will introduce an official papal Twitter account before the end of the year and hopes that all the fake papal tweets will cease and desist. A Vatican official acknowledged that many existing feeds are run by people of good will. (CNS photo)

VATICAN CITY (CNS) — Once the Vatican launches Pope Benedict XVI’s official Twitter feed before the end of the year, it’s hoped all the fake papal tweets will cease and desist, said a Vatican official.

There are dozens of unofficial @PopeBenedict handles and usernames in a number of different permutations and languages on Twitter; many are using an official portrait of the pope as their avatar and some boast thousands of followers.

Some of these Twitter accounts are being run “obviously by people of goodwill” who tweet about real news and activities of the pope, said a Vatican official who requested anonymity.

The Vatican will have a verified and authenticated papal Twitter account, which will help users distinguish the official Pope Benedict stream from the imposters, the official said. No specific date has been set for its launch other than “before the end of the year,” he added.

Unfortunately, there are some phony accounts “that aren’t very helpful” because they obviously don’t have the best interest of the pope or his teachings in mind, he said.

For example, some bogus feeds produce off-color or inappropriate commentary. But if it’s obviously satire, comedy or parody, “nothing can be done about that because of freedom of expression,” the official said. Yet, there’s little risk of people mistaking those accounts with the official account, he added.

However, if an account holder is using the pope’s name with the aim of misrepresentation, misleading users or “username squatting” in order to prevent the Vatican from using the name or to illicitly offer the account name for sale, “then Twitter can close them down,” he said.

All the details about the official Pope Benedict Twitter account have not been hammered out, he said, such as which Twitter handles will be used and if there will be one username or different handles in different languages.

Feeds will be offered in five or six major global languages, though it’s not sure if Latin — the official language of the church — will be one of them, he added.

Even though the pope won’t be physically typing and sending the tweets, each message will be approved by the pope himself, he said.

To date, the Vatican offers a handful of official Twitter feeds in different languages, including Vatican news @news_va_en; Vatican communications @PCCS_VA; and the social network @Pope2YouVatican.

Pope Benedict sent his first-ever papal tweet in 2011 when he inaugurated and launched the Vatican’s online news portal, www.news.va, which aggregates news content from the Vatican’s newspaper, radio, television and online outlets.

“Dear Friends, I just launched News.va. Praised be our Lord Jesus Christ! With my prayers and blessings, Benedictus XVI,” the pope said with a tap on an iPad, sending the message onto the news site’s Twitter account.

The pope has long urged Catholics and Catholic media to use the internet and social networks for evangelization.

NEXT: Bishop links respect for environment to church’s sacramental life