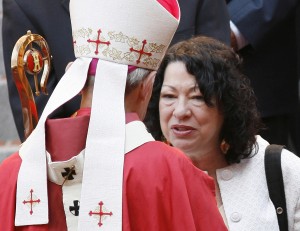 Sotomayor ruled on the petition because she oversees the federal circuit where Hobby Lobby filed suit challenging the HHS mandate.

Charles S. LiMandri, president and chief counsel for the Freedom of Conscience Defense Fund, which filed Priests for Life’s lawsuit against the government, told Catholic News Service that the government changed its stance after a judge in the District Court for the Eastern District of New York said he would be inclined to side with the pro-life group. Priests for Life argued that it was a religious organization that should be exempt from the rule.

NEXT: Parishioners mourn firefighters ambushed while responding to blaze