New collection seen as boost for Archdiocese for the Military Services 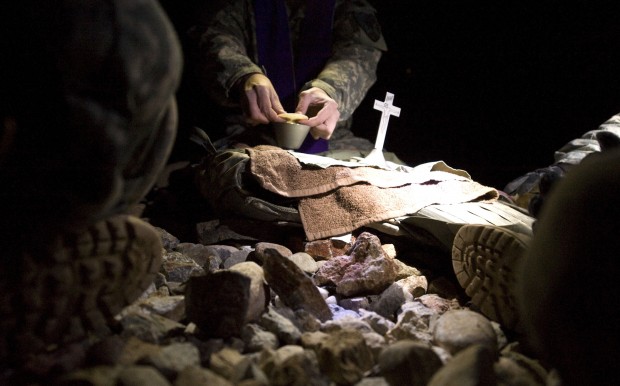 WASHINGTON (CNS) — The head of the Archdiocese for the Military Services is expecting greater financial stability and less pressure on the delivery of ministries and services once funds from a new national collection begin hitting the books in 2013.

Archbishop Timothy P. Broglio said the collection, approved by the U.S. Conference of Catholic Bishops during the fall general assembly is projected to raise at least $10 million when it is taken every three years in participating dioceses. The collection is likely to be taken near Veterans Day in November beginning next year.

Funds would be used to help pay off the $1.8 million mortgage on the archdiocesan headquarters in Washington’s Brookland neighborhood and establish an endowment for future needs. Both steps are expected to ease some of the pressure of having to raise $4.5 million to $5.5 million annually from private donors for the archdiocese’s operation, Archbishop Broglio told Catholic News Service.

“I think caring for military personnel is a concern of most American Catholics and I think they will be generous,” he said.

The military services archdiocese is responsible for many of the same services and ministries as any other diocese including records of baptisms and marriages.

Providing priests who serve as active-duty chaplains in all five branches of the military is just one area of ministry to an estimated 1.8 million Catholic Americans around the world. They minister not just to soldiers but their families as well.

Priests under the archdiocese also serve as chaplains at the nation’s five military academies, the 153 Veterans Administration facilities nationwide and to embassy staff and federal government contractors worldwide.

Overall, Archbishop Broglio said, about 250 priests serve in active duty as military chaplains and another 270 serve in the VA system. 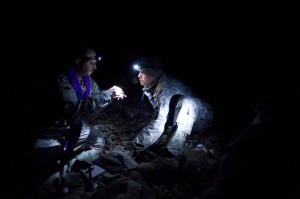 Father Carl Subler, a U.S. Army chaplain, gives Communion to Staff Sgt. Stephen Marshall while members of his squadron were awaiting transportation from a forward operating base in Zabul province, Afghanistan, in this Dec.12, 2009 photo.

“The Archdiocese for the Military Services basically provides all the services that a Catholic territorial diocese would provide except that our people, rather than being members of a diocese or archdiocese because of where they are located, they are members because of who they are,” Archbishop Broglio said.

In addition to Archbishop Broglio, who turns 61 Dec. 22, the archdiocese also has three auxiliary bishops:

— Auxiliary Bishop Richard B. Higgins, 68, is vicar for veteran affairs and is bishop protector for the 10,000 members of the Catholic War Veterans of America.

The position of vicar for the eastern U.S. is vacant.

The four clerics often are on the road, traveling to see chaplains at work and to celebrate Mass as much as possible. Their concern focuses much of the time on the soldiers deployed in Afghanistan in a war that has spanned more than 11 years.

“The people that I serve, particularly the active duty military are suffering after 11 years of war. I think that’s something people are aware of, but perhaps they don’t think about it. The wear and tear, the three and four deployments the families have experienced. It’s not just the man or woman who goes off to war. It’s also the people who remain behind and the adjustments in their lives,” Archbishop Broglio said.

Finding priests to take on the role of military chaplains is among the challenges facing the archdiocese.

New chaplains are recruited through the archdiocese’s vocations office, under the direction of Conventual Franciscan Father Kerry Abbott. He scours recommendations from other chaplains and interviews young men considering the priesthood who have expressed an interest in military chaplaincy to determine how well they might serve.

Father Kerry told CNS in an email the archdiocese receives about 500 inquiries a year.

The archdiocese co-sponsors seminarians studying for the priesthood in dioceses throughout the U.S., paying half of the cost of their formation. In return a young priest agrees, under contract, to apply to join the military branch of his choosing or become employed at a VA facility after serving his home diocese for three years.

This year, 46 men are in the co-sponsored seminarian program, which includes priests, deacons and seminarians Father Kerry said.

Archbishop Broglio said the three years of preparation helps a young priest understand the nature of his vocation. Once in the military, a priest often works on their own, at times under difficult conditions.

The archdiocese asks chaplains to commit to 20 years of service, but “we take what we can get,” Archbishop Broglio added.

Where the chaplains serve once they enter the military is the decision of the chief of chaplains in each branch of the service. Currently, about 10 priests minister to troops in combat in Afghanistan, Archbishop Broglio said.

The idea for a special collection every three years originated in 2009 with Archbishop Charles J. Chaput of Philadelphia, then head of the Denver Archdiocese. Archbishop Broglio said that during a visit to Denver, his colleague offered to help raise funds for the military services archdiocese after apologizing because “we haven’t been very good about giving you priests” to serve in the armed forces.

After going through the proper channels at the USCCB, the proposal finally came up for a vote by the entire body of bishops in November and passed 123-42 with eight abstentions.

NEXT: Bishop Pates urges White House to negotiate with Iran to prevent war