God’s love asks people to decide how to live their lives, pope says 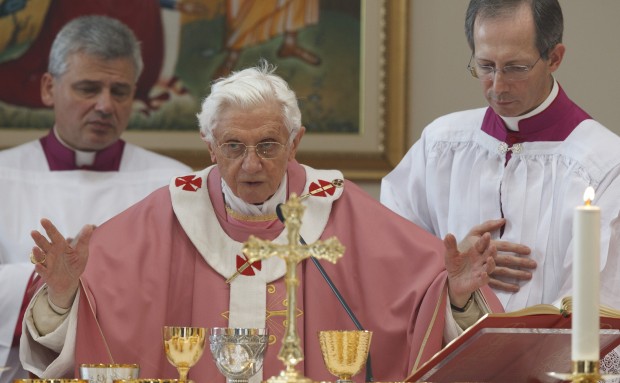 VATICAN CITY (CNS) — God’s love is unconditional yet demanding, asking all to choose how they will live their gift of life, Pope Benedict XVI said.

“The love of God sometimes follows paths one could never have imagined, but it always reaches those who are willing to be found,” the pope said in his message for the World Day of Prayer for Vocations, to be observed April 21, 2013.

God’s “deep, demanding love … gives us courage; it gives us hope in our life’s journey and in our future; it makes us trust in ourselves, in history and in other people,” the pope wrote in the message released Dec. 15. The day’s theme for 2013 is “Vocations as a sign of hope founded in faith.”

The pope said that God never abandons his creation and remains true to his word. His faithfulness is his love, which, “fully manifested in Jesus Christ, engages with our existence and demands a response in terms of what each individual wants to do with his or her life and what he or she is prepared to offer in order to live to the full.”

Accepting Jesus’ invitation to “Come, follow me,” means no longer choosing one’s own path, but rather “immersing our own will in the will of Jesus, truly giving him priority, giving him pride of place in every area of our lives: in the family, at work, in our personal interests, in ourselves,” he said.

Vocations to the priesthood and consecrated life “are born out of the experience of a personal encounter with Christ, out of sincere and confident dialogue with him” through prayer and the Sacraments, the pope said.

Pope Benedict called on young people to bypass “superficial and ephemeral” pursuits and cultivate a real desire “for what it truly worthy, for lofty objectives, radical choices, service to others in imitation of Jesus.”

He called on priests “to accompany young people as ‘companions on the journey,’ helping them, on life’s often tortuous and difficult path, to recognize Christ, the way, the truth and the life, telling them with Gospel courage, how beautiful it is to serve God, the Christian community and one’s brothers and sisters.”

NEXT: Irish government announces plans to legalize abortion, with limits