In Holy Land, Christmas traditions include family, parades and Mass 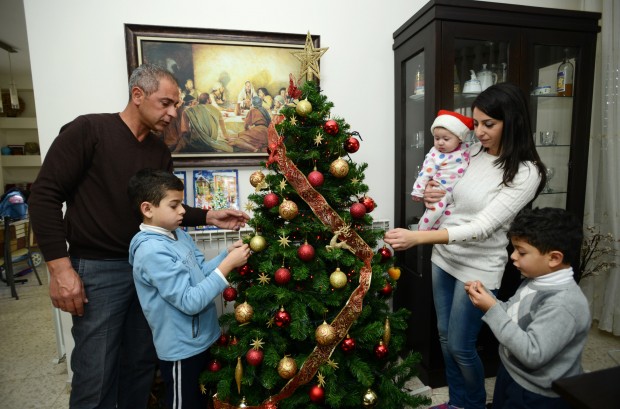 The Musallam family puts final touches on a Christmas tree at their apartment in the West Bank city of Bethlehem Dec. 15. Christmastime for Christians in the Holy Land is family time -- with many attending services, presenting gifts, visiting friends and sharing traditional treats. Pictured with Rami Musallam and his wife, Loreen, are 8-year-old Ameer, 4-month-old Sarah, and Aram, 5. (CNS photo/Debbie Hill)

JERUSALEM (CNS) — The simmering smell of cinnamon, nutmeg and cloves in Catholic parishes across the West Bank and Israel heralds the start of the Christmas season in early December as families prepare burbara, the special wheat pudding eaten to mark the feast day of St. Barbara, known as Eid El-Burbara in Arabic.

According to local Christian tradition, St. Barbara, who was beheaded by her pagan father because of her Christian faith, was held and tortured in a tower that stood in the nearby village of Aboud.

At a special Mass Dec. 4 at St. Joseph Parish in Jifna, the parish hall was laden with the homemade puddings presented in festive plates and decorated with chocolate Santa Claus bars, colored candies, sugared almonds sprinkled with cocoa. Families send bowls of the fragrant pudding studded with dried fruit and nuts to Muslim and Christian friends and neighbors.

“Normally we begin our Christmas celebrations after St. Barbara,” said Father Firas Aridah, pastor. Families begin decorating their homes and Christmas trees after the feast, he said. On Dec. 15 parishioners begin a novena, marking the nine days before Christmas, in a community-wide celebration when the village Christmas tree is lit and all the parishioners light their home decorations.

Girl Scouts and Boy Scouts lead a festive procession around the village, and the three priests from the Greek Orthodox and Catholic churches come together to celebrate and greet one another at St. Joseph Catholic Church.

In Israel, too, many Catholic communities will have own scout procession in the days leading up to Christmas. Some parades are replete with bagpipes, a tradition that extends to the days of British control.

A newer tradition in Bethlehem, West Bank, finds people singing Christmas carols in Manger Square starting Dec. 16 as choirs sponsored by the municipality perform through Christmas Eve, said Minerva Andonia, 35, of Bethlehem who is Catholic. Her husband is Greek Orthodox.

As almost everywhere, gift-giving is an important part of the festivities, though without the shopping frenzy often associated with the Christmas season in the United States and elsewhere.

“Presents are necessary,” Andonia said. “It’s the spirit of Christmas, but you can give something not expensive.”

Children also wait — impatiently — for the arrival of Santa Claus, she said, and are good-naturedly admonished to behave lest they end up with nothing.

In Catholic communities in Israel, a family member traditionally dresses up as Santa Claus and hands out presents to the children on Christmas Eve. More recently, stores offer their own “special delivery service” with employees dressing up as Santa Claus to deliver gifts.

Across the West Bank in towns with large Christian populations, young people often dress up as Santa Claus during the season and ring hand-held bells as they traipse around the town. In Israeli cities such as Haifa and Nazareth, children dressed as Santa Claus are also a common site.

While pilgrims congregate on Manger Square, most local Bethlehem Catholic families have their holiday meal at home. They attend an early Mass Christmas Eve at their local parish where there is a solemn procession with a statue of the infant Jesus.

At St. Catherine Church, adjacent to the Church of the Nativity, Massgoers participate in a tradition reaching back at least to the 18th century. A nearly life-size statue of the newborn Christ, normally kept at the side altar of Our Lady Mary, is placed in front of the main altar a few days prior to Christmas, said the Bethlehem parish priest, Father Marwan Di’des.

“At the end of Mass, in a nice procession the Latin patriarch takes the statue and places it in the grotto,” at the Church of the Nativity, said Father Di’des, who as Bethlehem parish priest will be conducting a midnight Mass in the grotto for 60 parishioners who obtained tickets on a first-come basis. “This is important not only for the people there but also for everyone watching via the mass media. For me it is a privilege to be able to say Mass in the grotto.”

To prepare for the moment, he said, he leaves all his other duties half an hour before the Mass and goes to the sacristy to prepare spiritually.

“I feel as if … Jesus Christ is really born at that moment in the grotto. It is very calm. I can feel the holiness of our Lord. The opportunity to say Mass in the grotto is a piece of heaven left for us on earth by our Jesus Christ,” he said.

The infant Jesus statue remains in the grotto from midnight until 2 a.m., when it is returned to Our Lady Mary altar.

“We pray in the grotto and read the Nativity story from the Gospel. The real feast is in the grotto, but we can’t say Mass there for everybody,” he said.

The traditional, more-crowded midnight Mass televised around the world is celebrated at St. Catherine Church.

In the Melkite Catholic village of Mi’ilyah in Galilee, decorating the village entrance is an opportunity for young people to socialize and have fun. However, this year, the festivities will be subdued in memory of a village resident who was murdered recently in the seaport town of Eilat, said Latifa Assaf, 33, of Mi’ilyah. As is the custom in Arab society, families who have lost loved ones during the last year do not have festive celebrations for the holiday, even though they still participate in the religious ceremonies.

The two days following Christmas are spent visiting family and friends across Israel and the West Bank. In Mi’ilyah, the male members of families go together in the early morning to pay condolence calls to families who have lost loved ones during the year. In the West Bank, brothers traditionally visit their sisters, bringing them small gifts and sweets.

“This visit makes me feel very happy, because not only my brother comes to visit me but my whole family comes. It makes me feel special,” Andonia said. “Even if we are a minority here we have to celebrate the spirit of Christmas. The Christmas spirit in Bethlehem is one of joy and happiness, and hope with Jesus.”

In the Galilee city of Nazareth, Israel’s largest Arab city and where Jesus spent most of his life, an afternoon procession on Christmas Eve launches the evening celebration as the streets are alight with decorations and stores are ablaze with lighted Christmas trees and colorful gifts. Christians from the neighboring villages gather in the city for a procession as well as a fireworks display. Dance parties for youth and parties for children follow the procession. Mass at the Basilica of the Annunciation is held in the early evening.

“But here, on Christmas everybody is mainly at home with their families,” Assaf said.

NEXT: European youths to usher in New Year with Taize songs, silence in Rome