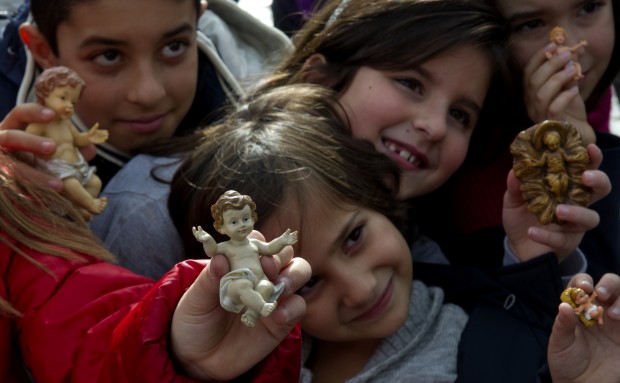 VATICAN CITY (CNS) — Mary’s role in the birth and life of Jesus shows all Christians that the strength of faith lies in trusting God, even when his will is mysterious and life seems dark, Pope Benedict XVI said.

“The power of God, in our lives as well, works with the often silent power of truth and love,” the pope said Dec. 19 at his weekly general audience.

Preparing for Christmas and continuing his Year of Faith series of audience talks, the pope focused on what Christians can learn about faith from Mary.

“Faith tells us that the defenseless power of that baby will vanquish the clamor of the powers of the world,” he said.

“The glory of God does not show itself in the triumph and power of a king and does not shine forth from a famous city or a sumptuous palace, but takes up its dwelling place in the womb of a virgin and is revealed in the poverty of a baby,” Pope Benedict said.

With a Nativity scene already decorating the stage in the Vatican audience hall, the pope’s weekly meeting with visitors and pilgrims already had a Christmas feel. The atmosphere was even more festive given the presence of a group of “zampognari,” Italian bagpipe players who shared their renditions of “Adeste Fideles” and other traditional carols.

Among the 4,000 at the audience was a large group from the Legionaries of Christ; 44 new Legionary priests from 12 countries were ordained in Rome Dec. 15.

Pope Benedict told the pilgrims that when the Angel Gabriel appeared to Mary, telling her that she would bear Jesus, rejoicing was the most natural response because the coming of the Messiah “proclaimed the end of the sadness in the world due to the limits of life, suffering, death, wickedness and the darkness of evil that seemed to obscure the light of divine goodness.”

At the same time, the pope said, Mary’s joy was not something superficial and it did not mean that she would never be sad or heartbroken again. In fact, he said, she would have to endure the crushing pain of seeing her son crucified.

“The same holds for each of us in our journey of faith: We will encounter moments of light, but also places where God seems absent, his silence weighs on our hearts and his will does not correspond to what we want,” the pope said.

But, Pope Benedict said, the more we follow Mary’s example and place ourselves completely in God’s hands, “the more he will enable us to live every situation of our lives in the peace and certainty of his faithfulness and love.”

NEXT: Pope writes on Christmas for major financial newspaper