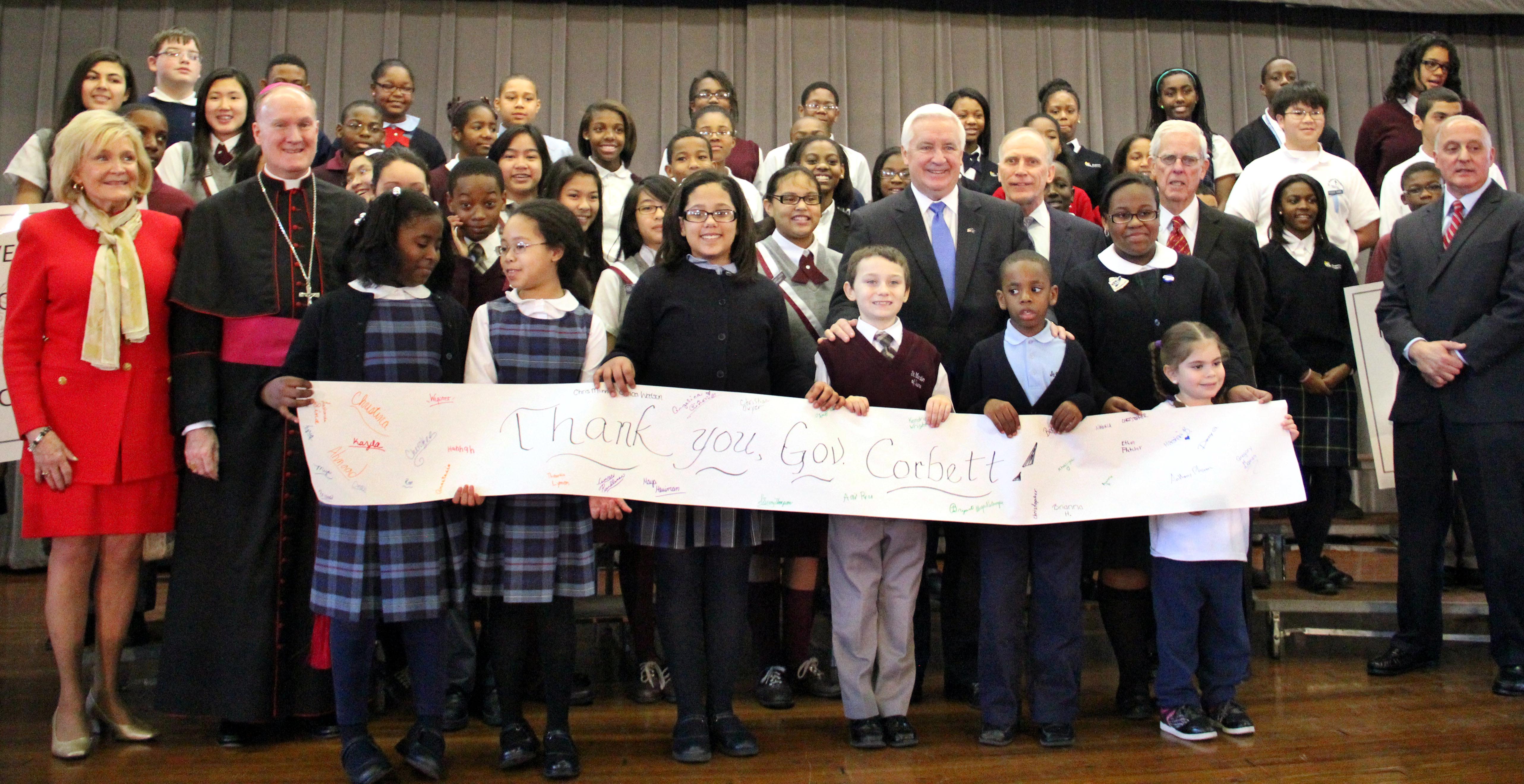 One of the mission schools, St. Martin of Tours in the Oxford Circle neighborhood in the Northeast, hosted the press conference and visit by the governor, Auxiliary Bishop Michael Fitzgerald, other members of the organization, parents and Catholic school supporters.

The organization began two years ago when St. Martin de Porres Parish School was struggling to serve the children of its gritty North Philadelphia community. Relieving management of the school from the parish, the group brought together financial support from business leaders plus expertise in school governance and accountability.

The results to this point have been impressive, according to CEO Brian McElwee. “Today it is financially stable with rising academic standards,” he said.

He added that the eighth grade class at the school recently scored at the ninth-grade level in the Terra Nova standardized tests.

The successful model was scaled up and expanded to include16 schools, mostly in response to the announced closures of dozens of Catholic parish schools early last year.

Most of those closures were the result of declining enrollments in the schools. But to McElwee, that is not the real reason.

“Declining enrollments are the symptom, not the disease,” he said. “Affordability is the disease.”

He noted recent conversations with people from various socio-economic backgrounds who wanted a Catholic education for their children but could not afford it.

“There is demand for these schools in a wide spectrum of people in the city or out,” McElwee said. “They are anchors in their community. They save (Pennsylvania) taxpayers $40 million every year. Success depends on our ability to offer scholarship dollars to these children.” 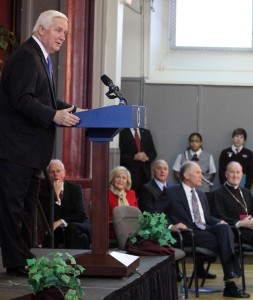 One of the best sources of such money, he said, is the longstanding Educational Improvement Tax Credit (EITC) and the newly enacted Opportunity Scholarship Tax Credit (OSTC).

Gov. Corbett has been a supporter of both tax credit programs, through which qualifying businesses can designate up to 90 percent of their state business tax liability to scholarship programs for nonpublic school children.

Corbett has also supported different models of educational reform in the state, including the tax credit approach, beyond traditional public school funding.

“Affordability is the issue,” he agreed. “Nobody has one solution, one right way of getting our kids educated. We need to look at things in new and different ways, to adapt to the times.”

Corbett said his administration will be watching the Independence Mission Schools model “very closely to see how this works to improve education for all.”

“We inherited a good system from the generation before us,” he said. “We need to turn it over to the people behind us.” That included the two dozen children representing the mission schools, standing behind him on the stage.

Philadelphia businessman James Maguire is a supporter not only of Independence Mission Schools but of the tax credit programs. His Philadelphia Insurance Co. applied to the OSTC and was approved the next day, with $444,000 in tax credits going toward educational scholarships.

“It doesn’t make sense for businesses not to use it,” he said.

As the new president of the schools organization, Cavalli brings 35 years of educational experience to bear. That includes a stint as an administrator at St. Gabriel’s Hall, the Catholic Social Services- run school for delinquent adjudicated boys in Montgomery County.

“When I heard about the new and dynamic model that the Independence Mission Schools were implementing to educate underserved children in Philadelphia’s poorest neighborhoods, I kn ew that I wanted to help,” he said. “I believe in the life-long benefits that come from Catholic education and believe that, regardless of faith, the mission schools are vital to Philadelphia’s children and the neighborhoods they serve.”

The 16 mission schools in the Philadelphia Archdiocese serve more than 4,200 children in grades pre-kindergarten to eight. Almost two-thirds of the students are nonCatholic and live in low-income families. IMS intends to raise $55 million and improve the educational resources of the schools with an emphasis on excellence.

One of the 16 schools, St. Cyril of Alexandria, is located in East Lansdowne, Delaware County. The other schools and their Philadelphia neighborhoods are:

Our Mother of Sorrows/St. Ignatius of Loyola, West Philadelphia