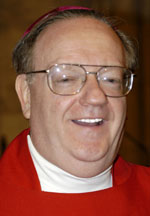 UPDATE — CAMDEN, N.J. (CNS) — Bishop Dennis J. Sullivan vowed to lead as a pastor, pledged that the church will never abandon the city of Camden and offered a greeting to Hispanics in fluent Spanish during his visit to the diocese after his appointment by Pope Benedict XVI.

His comments came as he was introduced Jan. 8 as the eighth bishop of Camden at a news conference in the Camden Diocesan Center soon after the appointment was announced in Washington by Archbishop Carlo Maria Vigano, papal nuncio to the U.S.

Bishop Sullivan, who will be installed as bishop of Camden Feb. 12, was an auxiliary bishop in the Archdiocese of New York since 2004. He succeeds Bishop Joseph A. Galante, 74, whose resignation was accepted by the pope six months before he turned 75, the age bishops are required by canon law to submit their resignation to the pope.

Bishop Galante resigned for reasons of ill health. He has been undergoing dialysis since being diagnosed with kidney disease in 2011.

“I joyfully welcome you to the wonderful people of God of this diocese,” Bishop Galante said in presenting Bishop Sullivan. “I trust you will come to love them as I do.”

Bishop Sullivan, 67, said he recently visited Rome, where he had made of point of visiting Contarelli Chapel in the church of San Luigi dei Francesi to see Michelangelo Merisi da Caravaggio’s painting “The Calling of St. Matthew.” The work, an image of contrasting shadows and light completed in 1600, depicts the moment at which Jesus calls Matthew to follow him. Meeting Jesus and pointing to his own chest, Matthew, a tax collector, has a look of astonishment on his face.

Bishop Sullivan said he felt the same reaction to his appointment to lead the Camden Diocese. But also as in the painting, he said, he felt the light of Christ touching him.

A native of the Bronx, Bishop Sullivan has spent 22 years as a pastor in New York and Larchmont, N.Y. He said he would bring a pastor’s sensibility to the chancery in Camden. He also said that he sees strength of the church in the local parishes. 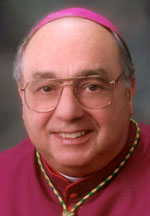 Like many other dioceses, Camden has undergone an extensive pastoral planning process that reduced the number of parishes from 132 to 70. Bishop Sullivan has been instrumental in New York’s own ongoing reorganization, and he said he knows how difficult, and how necessary, such changes are.

Bishop Sullivan, who noted that he once served at a parish in the Bronx in an extremely poor area, received applause when he said, “the church must walk with the poor and never abandon the city of Camden.”

In addition to offering a message in Spanish, the bishop stressed that Hispanic Catholics are not simply Catholics who speak a different language but members of the church with their own sensibilities, gifts and customs.

Noting that this year has been designated a Year of Faith by the pope, Bishop Sullivan said he is “walking through the door of faith.”

“I know I don’t need to walk alone,” he said. “I walk with the Lord and in the goodly company of the faithful.”

Archbishop Charles Chaput, on behalf of the faithful of the Archdiocese of Philadelphia, extended “warm and prayerful congratulations to Bishop Dennis Sullivan, who was appointed Bishop of the Diocese of Camden today. Bishop Galante has served the Church in South Jersey faithfully for a number of years and we pray for his health as he enters retirement.”

“May the Lord richly bless Bishop Sullivan’s episcopal ministry and all those entrusted to his pastoral care,” Archbishop Chaput said.

Cardinal Timothy M. Dolan of New York welcomed the appointment in a Jan. 8 statement, saying Bishop Sullivan has been “my right hand” in serving as vicar general for the archdiocese. The cardinal said Bishop Sullivan regularly shared “his wise counsel and insights” stemming from his 40-plus years as a priest in the archdiocese.

At the time of his appointment to Camden, he was serving as vicar general of the New York Archdiocese.

Cardinal Edward M. Egan, who preceded Cardinal Dolan and consecrated Bishop Sullivan after his appointment as a bishop in 2004 while he was archbishop of New York, commended his colleague for his commitment to the faithful of Asian and Latin American heritage as well as to needy people.

“I look forward to assisting Bishop Sullivan in any way I can over the years that lie ahead, particularly through my prayers for him and the people he will be shepherding,” Cardinal Egan said in a statement Jan. 8.

He was named auxiliary bishop of San Antonio in 1992 and in 1994 became bishop of Beaumont, Texas, before serving as coadjutor bishop of Dallas beginning 2000. He returned to the East Coast in 2004 when he was named bishop of Camden.