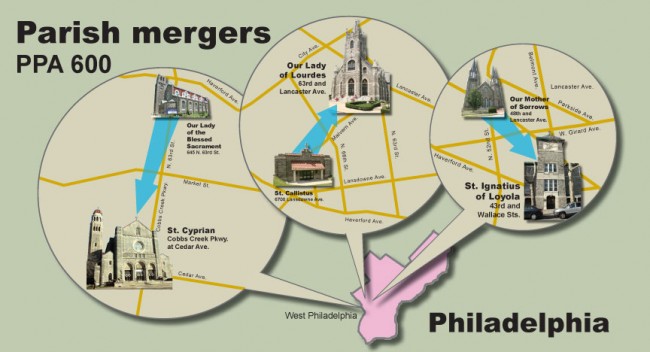 UPDATE — As announced at parish Masses on Jan. 5-6, six West Philadelphia parishes located mostly in Parish Planning Area 600 will merge as three parishes. The closures are the latest result of the ongoing strategic planning process in the Archdiocese of Philadelphia. 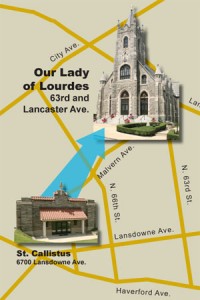 St. Callistus, at 6700 Lansdowne Ave., will merge with Our Lady of Lourdes at its location at 63rd St. and Lancaster Ave.

Our Mother of Sorrows, at 48th St. and Lancaster Ave., will merge with St. Ignatius of Loyola at its location at 636 N. 43rd St.

The three remaining parishes will be considered new parishes although they will retain the name of the receiving parishes – Our Lady of Lourdes, St. Ignatius and St. Cyprian.

The former St. Callistus, Our Mother of Sorrows and Our Lady of the Blessed Sacrament will remain as worship sites for the time being.

According to 2011 statistics compiled by the archdiocesan Office for Parish Service and Support, St. Callistus, founded in 1921, had 181 worshipers at weekend Masses; Our Lady of Lourdes, founded in 1894, had 819 worshipers.

“I was through this before in Buffalo where I had to close three parishes,” said Our Lady of Lourdes pastor Mercerdarian Father Michael R. Rock.

So far the transition seems to be smooth, he thinks.

“It is really like a marriage; both churches bring their best attributes together. We will have to be welcoming and sensitive. It is not easy, it is very emotional and we will have to work on it.”

On the surface, the two parishes would appear different. While St. Callistus, a largely African-American parish has been losing members, Our Lady of Lourdes, which also has some African-American members, has been growing, largely because Latin and other traditional liturgies bring people from all over. Nevertheless, the English language liturgies are also well attended. “We will make the people as comfortable as possible,” Father Rock said.

“It will be a change for those at Our Mother of Sorrows,” said Father Jeffrey M. Stecz, the pastor of the parishes. “We have been dialoging together on this over the last year or so and we will try to come together and build anew together with the rich traditions of both parishes.”

Bernadine Hawes, a 20-year member of St. Ignatius and a member of the parish finance council, said of Our Mother of Sorrows, “it’s stunning, the physical size of it.”

However, the smaller St. Ignatius is probably more suitable for the numbers in the parish today, she thinks.

With that said, “I’m more saddened that Our Mother of Sorrows is closing than I am glad St. Ignatius is not. In a parish you begin to develop a sense of spiritual community and it is difficult when it closes.”

Although the Archdiocese has directed the receiving parish’s name be kept, Hawes said, “We are going to petition to have this changed. We think it is inappropriate for us to keep our name when Our Mother of Sorrows doesn’t. Our school is called Our Mother of Sorrows/St. Ignatius.”

As it is the two parishes have been meeting to make a smooth transition, she said. “This is not a death but a new life going forward.”

Patricia Brown, a member of Our Mother of Sorrows’ pastoral council, is third generation in the parish. “My mother went to school here and I went to school here,” she said. “It broke my heart when I heard the news. I cried. We have so many memories.”

But because the two parishes held joint committee meetings and shared a choir, the combination should be a bit easier, thinks Brown, who is secretary in the school.

“We will work together, but I love my parish,” she said. 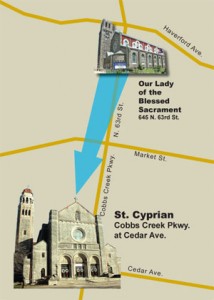 The archdiocesan strategic planning process began in the fall of 2010. A pastoral letter issued by then-Archbishop of Philadelphia Cardinal Justin Rigali announced the start of an in-depth examination of all parishes.

Merger recommendations are based on a combination of factors including demographic shifts in Catholic population, concentrated density of parishes in a limited geographic area, history of declining Mass attendance and sacramental activity, increased economic challenges that threaten sustainability, a decrease in the availability of clergy, and the condition of the facilities.

In the affected PPAs pastors and usually parish representatives meet with their dean, a priest with responsibility for a region of parishes in the Archdiocese, and a facilitator to formulate suggested plans, set goals and identify criteria. Recommendations are brought before the Council of Priests and the College of Consulters by the Archdiocesan Strategic Planning Committee for their observations and approval, with a final recommendation given to the Archbishop. 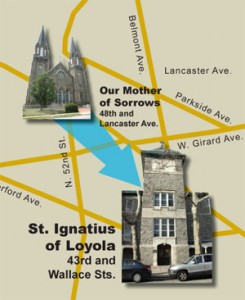 “There has been extensive study and detailed study before these suggestions were presented to the Archbishop for his approval,” said Msgr. Arthur E. Rodgers, Coordinator for Archdiocesan Planning Initiatives.

In addition to the mergers announced this week, Archbishop Chaput has directed that the merger plan for St. Barbara, St. Donato and St. Rose of Lima, also in PPA 600, receive broader input and consultation. Decisions for those parishes are expected in the spring.

Other PPAs under study during the remainder of 2013 include PPAs 320 and 370 in Delaware County; PPA 540 in Northwest Philadelphia, and PPA 650 in Central Philadelphia.