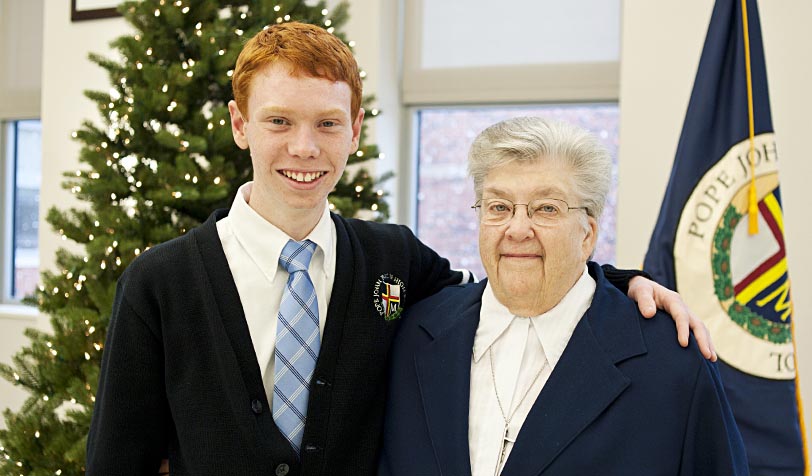 The chamber named Immaculate Heart of Mary Sister Janet Purcell, principal of Pope John Paul II, as educator of the year, and George Harmansky, a senior at the school, was selected for the Future Community Leader award. The awards dinner was held last December at the Presidential Caterers in Norristown.

“At first I thought someone was kidding me, but it was for real,” said Sister Janet, who has been principal of the school for two years. “It’s a great honor, and I’m pleased that it brought a good light onto the school.”

Sister Janet has a distinguished track record as a teacher and school administrator, with 52 years of service in Catholic education. For 23 of those years she has served at schools in Montgomery County, including Archbishop Kennedy High School in Conshohocken. She was principal at Kennedy-Kenrick in Norristown before becoming the assistant principal for academic affairs when Pope John Paul II opened in Royersford in 2010.

“This is the second time I’ve been involved in a merger,” Sister Janet said, referring to the 1993 merger of the former Archbishop Kennedy and Bishop Kenrick high schools. Pope John Paul II resulted in the merger of Kennedy-Kenrick and St. Pius X in Pottstown. “That is something not too many people get to do. It’s very exciting to take a brand new group of students and form new traditions and form a school spirit.”

She noted that while the transition was challenging, the students have done a great job of forming new traditions. To commemorate the history of the school, Sister Janet said the flags from the legacy schools – St. Patrick, St. Matthew, St. Pius X, Bishop Kenrick, Archbishop Kennedy and Kennedy-Kenrick – are on display in the Grand Hall at Pope John Paul II.

Having the opportunity to represent his high school at the chamber awards dinner was an unexpected highlight of George Harmansky’s senior year. “It was amazing,” he said. “I know there are a lot of people in the school who definitely could have won this award. At the dinner I sat there thinking, ‘I’m representing the whole student body and that’s something few people get to do.’”

The school administrators nominated Harmansky because of his service to the school and in the community. At Pope John Paul, he is a student ambassador, a member of stage crew and he has served as manager of the football team and a scorekeeper for basketball games.

Outside of school Harmansky is actively involved in his parish, St. Aloysius in Pottstown, and serving the community as a volunteer firefighter.

Harmansky volunteers with two fire companies – the Phillies Fire Company in the Pottstown Fire Department and the Upper Pottsgrove Fire Company. He plans to be trained as an emergency medical technician, and he wants to start earning his firefighter certifications.

Public service runs in his family; his father works in law enforcement, and his uncle and a brother have been involved in local fire companies. Harmansky said he is unsure about pursuing a career as a firefighter, but he will attend college, most likely at West Chester University or Immaculata University.

In addition to being a volunteer firefighter, Harmansky also enjoys helping his parish. He has been an altar server and sacristan and also assists with technology projects. “I’m there to help with anything that needs to be done,” Harmansky said.

Sister Janet noted that his willingness to help is also evident at school. “George is very loyal to the school,” she added. “He’s very low-key and doesn’t require a lot of attention but does a lot of good at the school. He steps up to the plate whenever he’s asked to help.”

One project Harmansky handles is lining the campus with flags for Veterans Day, the Sept. 11 anniversary and other occasions. “He got someone to donate 500 flags to the school,” Sister Janet said.

Harmansky said his service to others is definitely connected with his Catholic faith. “I want to help and give of my gifts and talents,” he added. “Jesus went out there to serve others. It’s not for me; it’s for someone else.”

The recognition from the chamber is a memorable event that he will cherish for a long time. “It’s been a great experience,” Harmansky said. “It’s just an amazing honor to represent the school in this manner.”