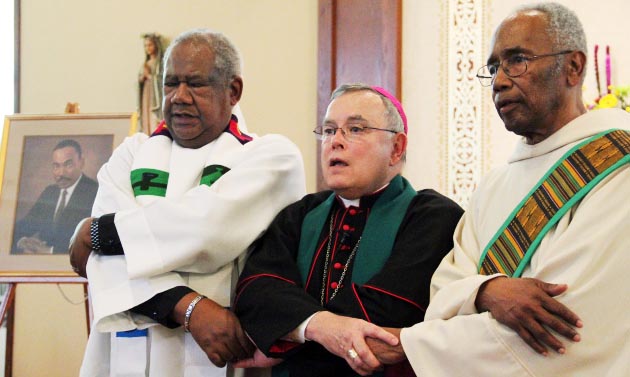 Msgr. David Benz, Archbishop Charles Chaput, and Deacon Edward Purnell interlock arms as they sing “we shall overcome” with those in attendance at the interfaith prayer service. 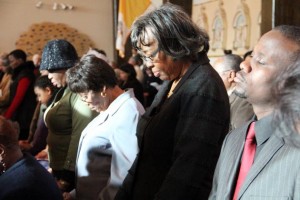 From left, Olive Crumpler, Alma White and Isaac Dahn bow their heads in prayer at the interfaith service honoring Martin Luther King Jr. Sunday at St. Therese of the Child Jesus Church in the Mount Airy section of Philadelphia.

The church was jammed and overflowing for the 30th annual Archdiocesan Interfaith Commemorative Prayer Service in honor of Dr. King.

Solid preaching and great music are hallmarks of African American liturgies whether Protestant or Catholic, and that was certainly the case on this occasion. In this case Rabbi Tshura August, chaplain of the Jewish Hospice Network, Rev. Steven Lawrence of White Rock Baptist Church  and Archbishop Charles Chaput based their reflections on Isaiah 62, 1 Corinthians 12 and John 2. Not coincidentally these were also the readings at most Christian churches on that particular Sunday and all three speakers effectively applied the texts to the life of Dr. King as well as to the challenges of today.

Rabbi August, who chanted from the text, spoke of how the freedom of the Israelites from the Babylonian Captivity parallels the freedom from a different captivity Dr. King fought for.

“Isaiah gave that vision to all people in the 6th century (B.C.). His voice rings true  today as it did thousands of years ago, and that is what Dr. Martin Luther King did, he gave us a vision of ourselves … like Isaiah he would not be silent, he would not be still.”

The Corinthian text touches on the many different gifts Christians brought to the Church and Rev. King stressed the differences various groups bring to our land, Rev. Lawrence explained. “We have not yet figured out how to live together and be different,” he said.

Archbishop Chaput’s reflection recalled the compassion of Mary at the Wedding Feast of Cana and her concern that the hosts should not be embarrassed, and because of this, Jesus performed his first public miracle.

“Dr. Martin Luther King made something happen that had never happened before,” he said. “In those days in our country it would be hard to imagine that there would be a commitment on the part of the government in a formal way to end discrimination and racism.”

Dr. King, the Archbishop said, was “obedient to the voice of Christ calling him to work for non-violent change in our country. The ordinary pattern of American life changed in an extraordinary way.”

Those of us who follow in the footsteps of Dr. King must “leave everything up to Jesus and do everything Jesus tells us to,” Archbishop Chaput said.

Throughout the readings of the service there were spirit-filled interludes by the excellent choir, and Msgr. David Benz, pastor of St. Therese, also reflected on the life of Dr. King.

After the playing of a recording from Dr. King’s famous “I Have a Dream” speech, Msgr. Benz noted the recording was fading, and added, “we must live the words of Dr. King, we must remember.”

Geri Dennis of St. Raymond Parish is among those who do remember Dr. King. For her, his message is, “there is a future if only we believe, we trust and we hope,” she said.

Miriam Allen, also of St. Raymond, said Dr. King “gives me the strength and courage to go on, and if there are any battles to be fought, his is the way to do it.”

The annual archdiocesan celebration in honor of Dr. King is spearheaded by the archdiocesan Office for Black Catholics, and Bill Bradley, who is director of the office, noted “each year when his birthday rolls around it invigorates people back to service.”

“We have to make sure it is not just a memory of the older people,” he added. “We have to engage the young people, and I’m happy to see so many young people here today.”

One of those younger people was Joewania Hall, a student at Drexel Neumann Virtual Academy in Chester, who said Dr. King “makes me want to change the world like he did.”

After the service all gathered in the parish hall for further celebration and fellowship. 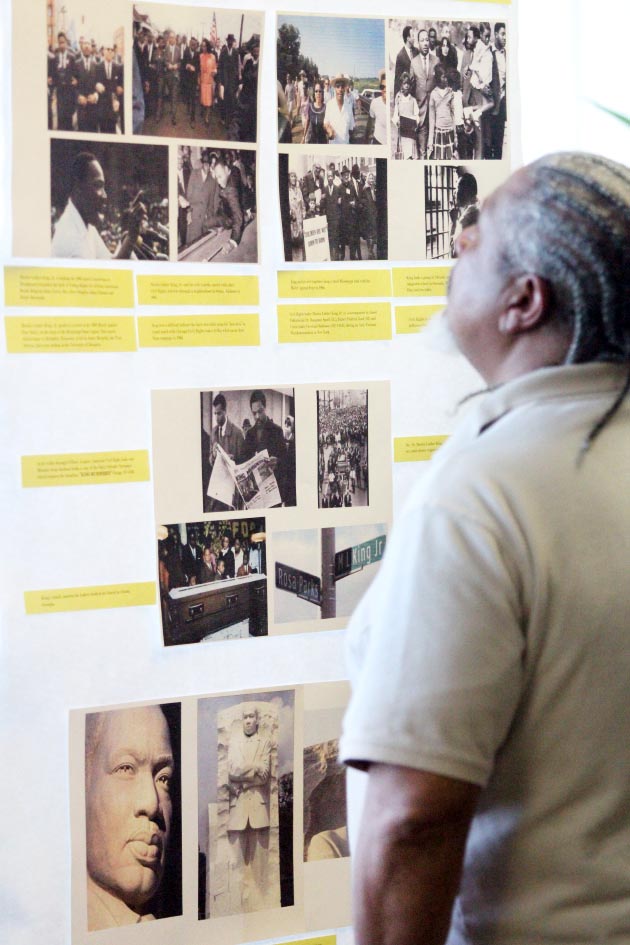 James Stitt reads a timeline with photographs showing the life of Dr. Martin Luther King Jr. that was put together by the staff at St. Therese Parish.

NEXT: Principal and student from Pope John Paul II High School honored by chamber of commerce