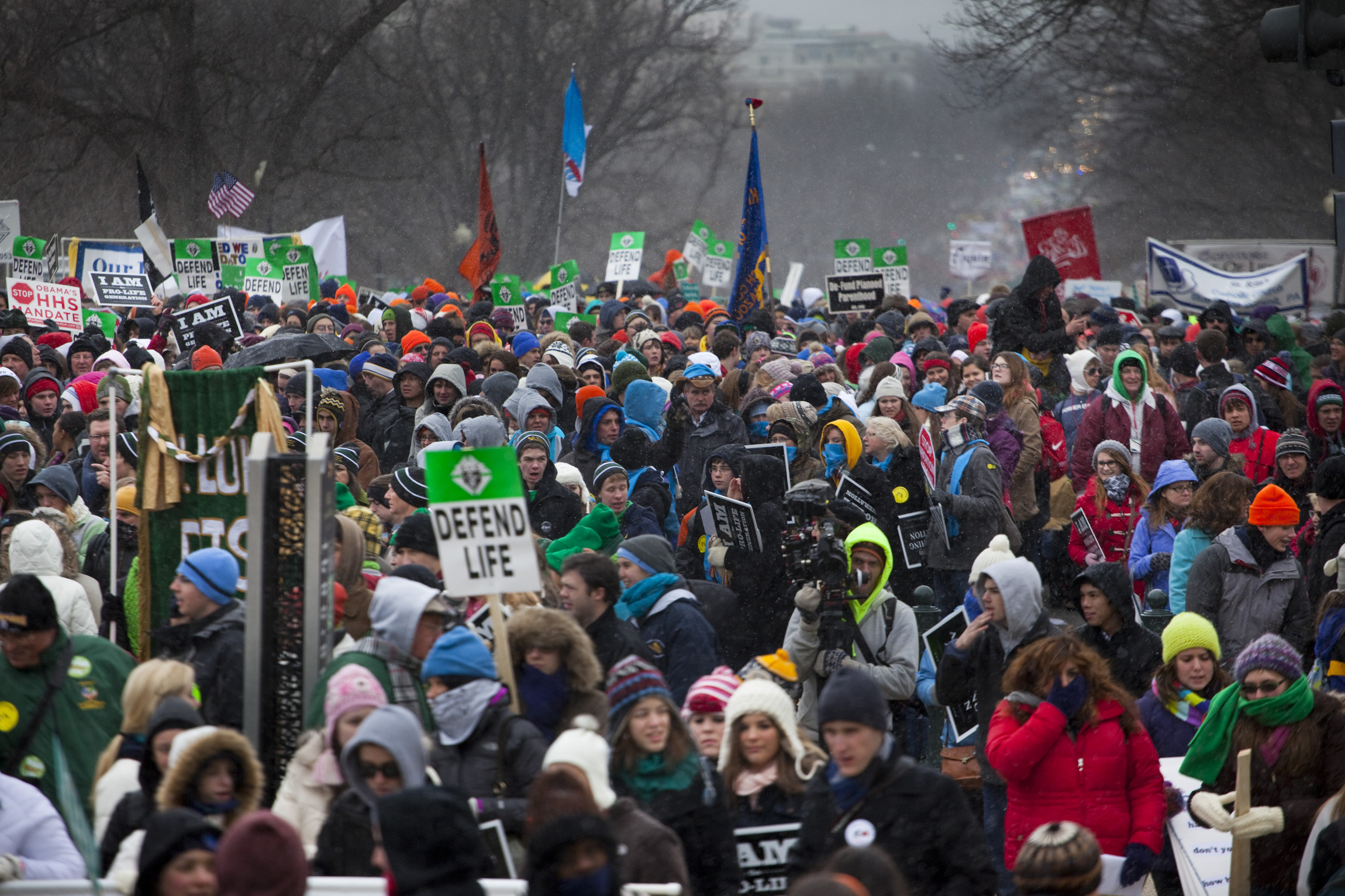 WASHINGTON (CNS) — Participants at the annual March for Life in Washington Jan. 25 demonstrated just how determined they are not only by showing up in such large numbers on a bitter cold day but by continuing a 40-year tradition of protesting the U.S. Supreme Court’s decision legalizing abortion.

“Forty years ago, people thought opposition to the pro-life movement would eventually disappear,” Boston Cardinal Sean P. O’Malley told the crowd assembled on the National Mall for a rally prior to the march along Constitution Avenue to the front of the U.S. Supreme Court.

He noted that Nellie Gray, founder of the annual march who died last year, “was not going to allow that to happen” nor was the pro-life movement.

“The march grows stronger every year,” said the cardinal, chairman of the U.S. Conference of Catholic Bishops Committee on Pro-Life Activities.

Various media outlets put the estimate for this year’s March for Life crowd at between 500,000 and 650,000. An official crowd estimate has not been provided by police since about 1995. A Catholic News Service query for a crowd estimate submitted early Jan. 28 via voicemail and email had not yet been returned by midday.

Many speakers praised the resiliency of the crowd, braving a cloudy 20-degree day and standing on snow-dusted ground, but they also spoke of the pro-life movement getting re-energized by young people who are becoming the movement’s new torchbearers.

This year’s march and rally took place three days after the anniversary of the Supreme Court’s Roe v. Wade decision to better accommodate participants, since the official Jan. 22 anniversary was the day after public ceremonies for the presidential inauguration.

Hundreds of high school and college groups were scattered throughout the rally crowd; their members, often in matching hats, were texting, taking pictures and creatively protesting by wearing pro-life stickers on their faces and carrying placards in the backs of their jackets.

Their placards did not have jarring images or messages but predominantly took a gentler tone such as: “Abolish Abortion Courageously” or “I am the pro-life generation.”

Jeanne Monahan, new president of the March for Life Education & Defense Fund, is 40 — just as old as the 1973 Supreme Court decision and the movement protesting it.

Monahan praised Gray for her long dedication to the cause and several speakers also credited her for getting the pro-life movement on its feet with the first march and leading each one until her death. During the rally, a video tribute to her was shown on the giant Jumbotron.

Monahan described abortion a “human rights abuse” but she also said there were signs the tide was changing as more anti-abortion measures have been introduced in state legislatures and public opinions are changing. As she put it to the cheering crowd: “Being pro-life is considered the new normal.”

Speakers on the stage stood below the message “40=55 million,” referring to the number of abortions reported to have been performed since abortion was legalized.

This year’s rally did not include speeches by dozens of politicians as in previous years. Nine legislators were announced and only a handful spoke.

House Speaker John Boehner, R-Ohio, addressed the crowd with a taped video message promising to work for passage of a bill to ban taxpayer funding for abortions. Rep. Diane Black, R-Tenn., told the crowd she would fight for a bill she has introduced to prohibit family planning grants from going to groups that provide abortions.

Rep. Dan Lipinski, D-Ill., urged participants to continue to “stand courageously for life.” He said legislative battles will continue to take place to change abortion laws and that the pro-life movement “must be compassionate to change hearts and minds.”

Rick Santorum, former senator and presidential candidate, spoke about his 4-year-old daughter, Bella, who suffers from Trisomy 18, a rare genetic disorder that is often considered fatal.

Santorum said babies diagnosed with disabilities in the womb are often aborted. He and his wife were encouraged to abort their daughter, he said, because “she was going to be saddled with disabilities and it would be better for her. But we all know that death is never better.”

“She makes us better,” he said, referring to her impact on his family.

Santorum also praised the continual efforts of those in the pro-life movement particularly those who volunteer at crisis pregnancy centers, stressing that this is “not a group moralizing from the mountaintop.”

U.S. Rep. Chris Smith, R-N.J., co-chairman of the House Pro-Life Caucus, similarly praised those in the pro-life movement saying it is “comprised of noble, caring, smart and selfless people. It is an extraordinarily powerful, non-violent, faith-filled human rights struggle that is growing in public support, intensity, commitment and hope.”

Another new aspect at this year’s rally was more use of social media technology, with speakers prior to the rally’s start urging participants to tweet about the rally and follow March for Life on Twitter and Facebook.

Cardinal O’Malley read a tweet to the crowd from Pope Benedict XVI, which said: “I join all those marching for life from afar, and pray that political leaders will protect the unborn and promote a culture of life.”

Rueben Verastigui, youth activist, had a specific message for the crowd’s youths.

“You can’t just sit around waiting for change to happen; you have to get up and make it happen.” He urged them to get involved in pro-life work and if they feel they are alone they should remember this experience. “Look around, we are not alone. We are not the future of the pro-life movement; we are the pro-life movement!”

Although his message was directed to young people it could apply to all ages in the crowd bundled in winter coats, gloves and hats.

Mary Salmon, who has been coming to the march for the past 15 years, told Catholic News Service she is always energized by the march to continue her work at a crisis pregnancy center.

Salmon, a parishioner from St. Andrew’s Parish in Clifton, Va., also feels the pro-life movement needs to educate more people and more effectively spread its message. Instead of always just responding to the opposition, it needs to take the lead, she said.

In other words, she was not content just to march. “We have to do something more,” she said.

NEXT: Judge calls HHS suit filed by Washington archdiocese and others, ‘premature’