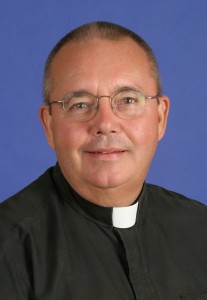 ATLANTA (CNS) — A former Southern Baptist who became a Catholic at the age of 24 and has served at various archdiocesan parishes, Msgr. David P. Talley, 62, who has been named by Pope Benedict XVI as an auxiliary bishop of the Archdiocese of Atlanta.

At a press conference in Atlanta, Archbishop Wilton T. Gregory called the bishop-designate, “one of our finest priests.”

“It’s all new. What an understatement,” said Bishop-designate Talley, who wore a pin of Our Lady of Guadalupe on his lapel.

He learned Dec. 18 of the appointment at his office at St. Brigid Church, Johns Creek, Ga., in a phone call from the apostolic nuncio to the United States, Archbishop Carlo Maria Vigano. Bishop-designate Talley said the nuncio “encouraged me to trust in the Lord.”

Archbishop Vigano formally announced the appointment Jan. 3 because it is the feast of the Most Holy Name of Jesus, the bishop-designate said.

He thanked the archbishop, saying that he looked forward to his appointment in this “special Year of Faith.” He ended his formal remarks at the news conference with a simple, “Pray for me.”

Archbishop Gregory said the unprecedented appointment in the Atlanta Archdiocese of a second auxiliary bishop is a sign of how church leaders see the vibrant Catholic community in the northern half of Georgia.

It is “an obvious recognition of and an invitation for our continued growth and development as a vibrant community of Catholic faith,” he said in a statement.

For the first time, there will be three bishops to lead the 1 million Catholics in the 69-county archdiocese.

Archbishop Gregory said the appointment is an “indication of the movement South of many Catholics” and the expansion of the church in the region.

Now the bishops “can be at three different places” at once, he said.

He noted that Bishop-designate Talley will be the first bishop for Atlanta who is a native Georgian.

Born in Columbus, Ga., Bishop-designate Talley was ordained in 1989 at the Cathedral of Christ the King, Atlanta, by Archbishop Eugene A. Marino. He earned a licentiate and doctorate in canon law from the Gregorian Pontifical University in Rome in 1998 and has served in various pastoral roles in the archdiocese, including as vocations director, chancellor, and judicial vicar of the metropolitan tribunal. He was named a prelate of honor, with the title of monsignor, by Pope John Paul II in 2001.

Bishop-designate Talley will continue as pastor at St. Brigid until his ordination April 2 at the Atlanta cathedral.

One of his roles in the archdiocese is as chaplain to the disabilities ministry. His experience ministering among people with disabilities is key to his spiritual life, he said.

“All they can do is ask the Lord for help. That simplicity and humility is where I think the church should be-humble before God,” he said.

Bishop-designate Talley was raised as a Southern Baptist, but said he left the practice of his faith and organized religion as a teen. At Auburn University he met Catholics and read the writings of Thomas Merton, which led him to become Catholic, he said. He was 24 when he joined St. Mary Church in Opelika, Ala.

Family members remain faithful Baptists, including a brother who is a deacon. That background gives him a broad view, he said. “I do know a faith across the spectrum,” he said.

He also did graduate studies at the University of Georgia. For a time before entering the seminary, Bishop-designate Tally was a caseworker in the Fulton County child abuse investigation and protection office. He studied at St. Meinrad Seminary in St. Meinrad, Ind.

Andrew Nelson is on the staff of The Georgia Bulletin, newspaper of the Atlanta Archdiocese.