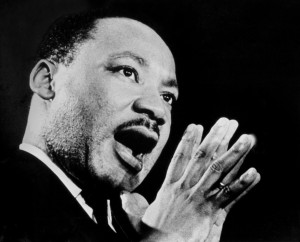 According to Deacon Melvin R. Tardy Jr., an academic adviser at the University of Notre Dame, the Rev. Martin Luther King Jr. was “the right person for the moment” in the civil rights movement. (CNS file photo)

GARY, Ind. (CNS) — The Rev. Martin Luther King Jr. may have been a reluctant leader, “but he was willing to put himself out there,” said Deacon Melvin R. Tardy Jr.

He was “the right person for the moment” in the civil rights movement, said the deacon, an academic adviser at the University of Notre Dame. What separated Rev. King from other contemporaries was faith, hope, and love, he added.

Rev. King, the product of a long line of pastors, was a gifted orator, yet down to earth, and his audience “felt what he felt,” the deacon said. Using what then was the fairly new medium of television, Rev. King not only touched his audience with a sense of right and wrong, but he also walked the walk.

Following the example of Gandhi, Rev. King used nonviolent direct action, Deacon Tardy said, to protest yet remain true to his beliefs. “He used civil disobedience to call people to crisis,” the deacon said. “He became a prophetic witness.”

Rev. King believed the kingdom of God was “something we can have today,” Deacon Tardy said, and “he had that sense that innocent suffering can be redemptive,” turning enemies into friends.

Rev. King also embraced agape — to love one another “as Jesus loved” — and he believed that “I will love this person because God loves this person,” the deacon noted.

The civil rights leaders also loved the United States, and his dream was “deeply rooted in the American dream,” he continued.

Faith, hope, and love, the deacon continued, made Rev. King a “game changer for this country.” His hope “impacted people of all backgrounds.”

An academic adviser in Notre Dame’s “First Year of Studies,” Deacon Tardy is an author, artist, musician and teacher. He was ordained a permanent deacon in 2011 for the Diocese of Fort Wayne-South Bend.

Recalling how the university’s recent quest for a national championship in football ended in defeat to Alabama, Deacon Tardy said that if the game were played in 1950, things would have been much different. Stadium seating, public transportation, lodging, water fountains, and medical care would all have been segregated. Alabama would not have had any African-American student athletes, as the first black student was admitted there in 1956. Notre Dame’s first African-American graduate came in 1947.

After centuries of slavery and segregation, World War II helped to change race relations, as African-Americans were trained in combat and leadership positions and were accepted in Europe. Then, Deacon Tardy said, came Brown v. Board of Education, the 1954 Supreme Court decision that desegregated the schools. The case dealt with racial segregation in Kansas schools.

“There was a new sense of hope,” Deacon Tardy said, as African-Americans found a “new ally in the Supreme Court.”

Although some conditions have improved, Deacon Tardy and other speakers at the King tribute encouraged young people to continue to protest injustices. These include bullying at school, gangs, drugs, low graduate rates, challenges in the home, abortions, and the high rates locally of children born to unwed mothers and born into poverty.

Noting how Rev. King turned to youths during his struggles, Deacon Tardy encouraged young people “to be about speaking truth. … We can overcome.”

Euvino is a staff writer at the Northwest Indiana Catholic, newspaper of the Gary Diocese.

NEXT: Abortion in America