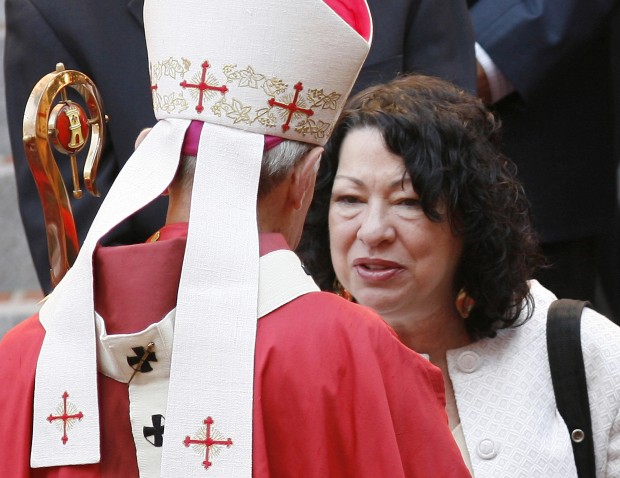 Four days later, a federal District Court judge in Michigan granted a temporary restraining order to Tom Monaghan, the founder of Domino’s Pizza, allowing him to decline to provide contraceptive coverage to the employees of his current business, Domino’s Farms Office Complex. The company’s website lists offices for lease, a petting farm, an art gallery, a hair salon, a fitness center, a Catholic chapel and Our Lady of Grace Bookstore among the entities on the property. It’s unclear how many people are employees of Domino’s Farms. Monaghan no longer has any financial interest in the pizza company.

District Court Judge Lawrence P. Zatkoff issued the Dec. 30 temporary restraining order, saying there would be little harm to the government in delaying possible implementation of the law at the company and that there was enough evidence of a possible valid religious rights claim by Domino Farms to justify further court proceedings.

At the Supreme Court, Sotomayor ruled on the bookstore chain’s petition because she oversees the federal circuit where Hobby Lobby filed suit challenging the HHS mandate.

Charles S. LiMandri, president and chief counsel for the Freedom of Conscience Defense Fund, which filed Priests for Life’s lawsuit against the government, told Catholic News Service that the government changed its stance after a judge in the District Court for the Eastern District of New York said he would be inclined to side with the pro-life group. Priest for Life argued that it was a religious organization that should be exempt from the rule.

NEXT: Budget deal defined as much by what’s left undone as by what it does