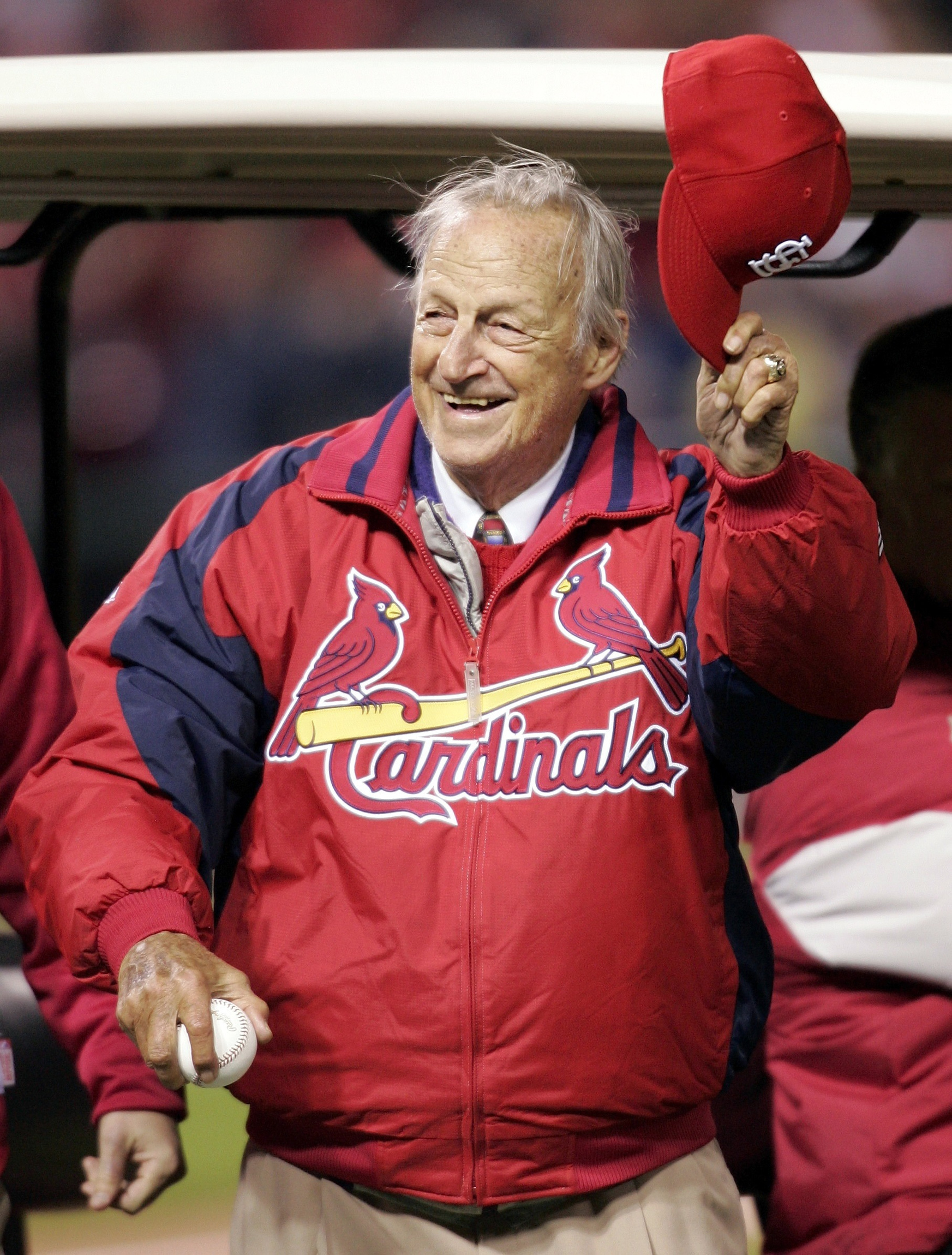 St. Louis Cardinal baseball Hall of Famer Stan Musial tips his hat to the crowd before he throws out the ceremonial first pitch prior to the start of 2006 World Series in St Louis. Musial, a Catholic, died Jan. 19 at age 92. He was awarded the Medal of Freedom in 2011 by President Barack Obama and over the years was supportive of charities of the Archdiocese of St. Louis. (CNS photo/John Sommers II, Reuters)

ST. LOUIS (CNS) — A funeral Mass was scheduled for Jan. 26 at St. Louis Cathedral Basilica for Stan Musial, the Hall of Fame outfielder-first baseman for the St. Louis Cardinals.

Musial, a Catholic who played all 22 of his major-league seasons with the Cardinals, died Jan. 19 at age 92 at his home in nearby Ladue, surrounded by family.

Cardinal Timothy M. Dolan of New York, a former auxiliary bishop in St. Louis, will celebrate the funeral Mass. Bishop Richard F. Stika of Knoxville, Tenn., who as a priest of the St. Louis Archdiocese was Musial’s pastor in Ladue, will preach the homily.

He banged out 3,630 hits during his career — split evenly, with 1,815 at home and 1,815 on the road. He belted 475 home runs, 725 doubles and 175 triples, an uncommon mix of power and speed. He won the National League’s Most Valuable Player award three times, as well as three World Series championships with the Cardinals. The owner of a .331 lifetime batting average, he became President Lyndon Johnson’s physical fitness adviser following his retirement.

Originally a pitcher, Musial’s hopes for a career on the mound vanished when he injured his shoulder fielding a ground ball in the minor leagues, but his bat helped him make the jump from Class C ball to the majors in just one year. A statue of Musial stands outside Busch Stadium in St. Louis.

In 2011, during ceremonies at the White House, Musial was awarded the Medal of Freedom, considered the nation’s highest civilian honor.

He was boyhood friends with the late Archbishop Nicholas Elko, once head of the Pittsburgh Byzantine Diocese and later appointed by Pope Paul VI as auxiliary archbishop of Cincinnati. He and Musial both had grown up in Donora, Pa.

Musial, who was of Polish descent, was long involved in growing the sport of baseball in Poland. He was involved with a Little League project in Poland, helping to build a training and conference center for coaches, trainers and players all over Eastern Europe.

He also helped out in the St. Louis area as well, including at the St. Vincent Home for Children, a residential treatment center for children with educational, emotional and behavioral difficulties. Giving back and helping others “gives you a great feeling,” he said.

Musial would remind youngsters that among his records was the record for making the most outs — more than 7,000 — yet he still was elected to the Baseball Hall of Fame. In his first game with the Cardinals, he said, he faced a knuckleball pitcher and popped out. “I thought, ‘This is going to be tough,’ but the next time up I hit a double and it started me on my way,” he said.

The slugger met Blessed John Paul II, including twice before Blessed John Paul ascended to the papacy. Musial said they first met when he was archbishop of Krakow, Poland. In 1971, he dropped in on then-Cardinal Karol Wojtyla, who received him even though he was ill with a bad cold.

“I tried to tell him that I was a baseball player, and that my father was born in Poland,” Musial recalled in 1988, after his first meeting with Blessed John Paul at the Vatican. The two had some trouble communicating, but when Musial returned to Poland two years later, the Blessed John Paul was already speaking fluent English, he said. “He probably doesn’t remember it, but I do,” Musial said.

“Alleluia! A great man! A superb athlete!” Cardinal Dolan said in a blog posting within hours of Musial’s death. “Married seven decades to his beloved Lil; proud father; committed Catholic — he readily admits one of the highpoints of his life was getting to know his fellow Pole, Blessed John Paul II; never missed Sunday Mass; no steroids or drugs; no brawls, enemies, or DUI. Just a gentleman, day-in-day-out reliable, never complaining or demanding; no controversy or foul language.”

Cardinal Dolan recalled when, at age 10, he and his brother met Musial at the St. Louis airport: “‘Hi Stan,’ we blurted out. ‘The Man’ looked at us. ‘Whaddaya say, sluggers?’ Never forgotten it. I was 10-foot tall.”

Bishop Stika said in 2009 that, although he was moving to Tennessee for his Knoxville episcopal assignment, he would never be able to root for any baseball team other than the St. Louis Cardinals, especially because of former parishioner Musial, whom he called “a good friend and a true model of a baseball player.”