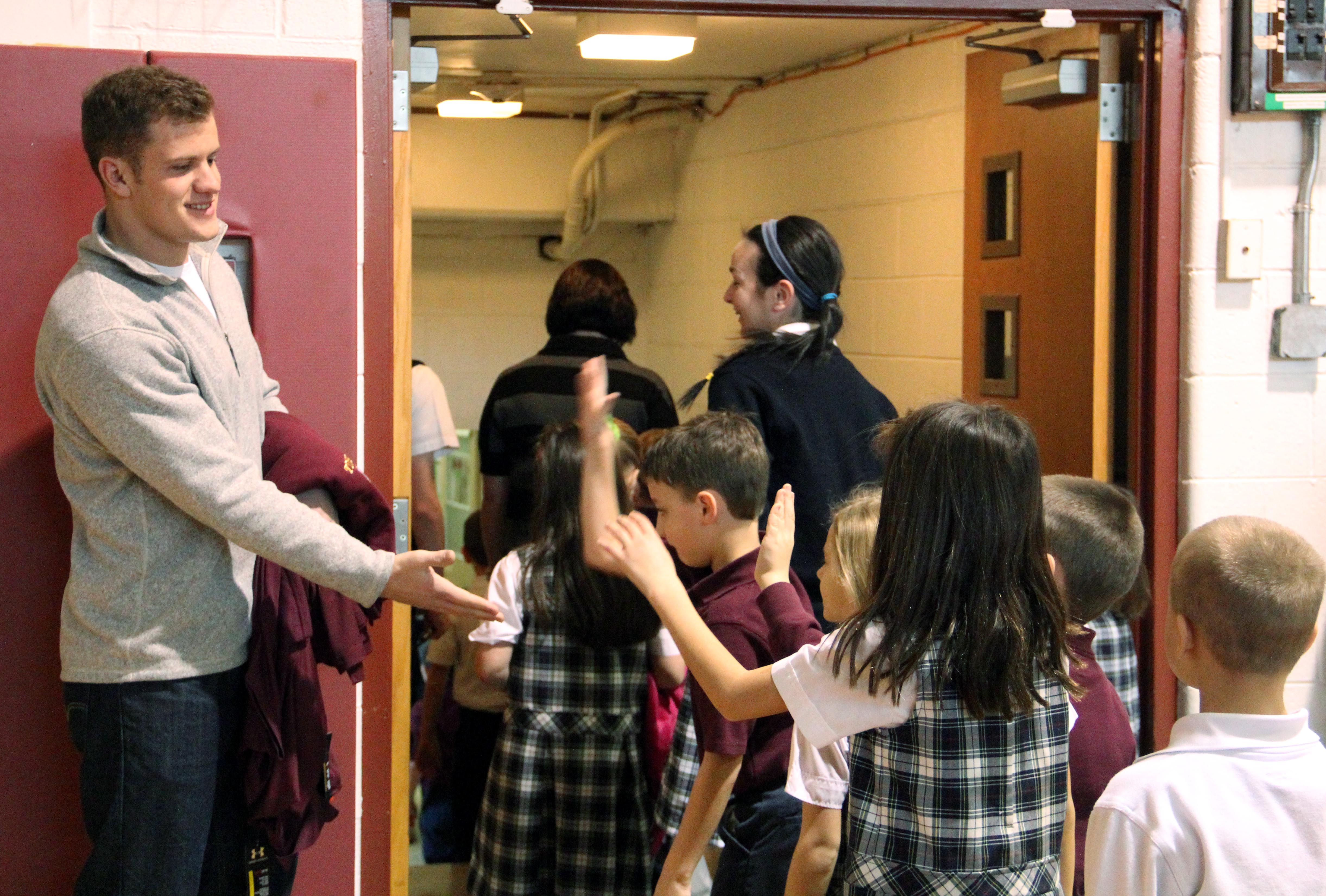 Students receive high fives from Syracuse University standout quarterback Ryan Nassib after he addressed them during an assembly at SS. Simon and Jude School, West Chester. Nassib, expected to be drafted high in the coming NFL draft, attended SS. Simon and Jude and St. Maximilian Kolbe School before graduating from Malvern Prep. (Photos by Sarah Webb) 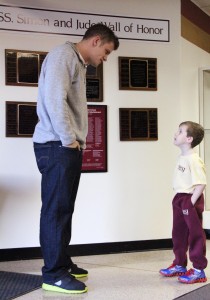 Kindergartener Joseph Croce chats with Ryan Nassib when he visited SS. Simon and Jude School, West Chester, where he attended through fourth grade.

Ryan Nassib is feeling pretty darn fine these days, and for good reason.

At some point of the upcoming 2013 National Football League draft in late April, the 2008 Malvern Preparatory School graduate will hear his name announced and discover which new destination awaits him.

That will fulfill a major part of the payoff for an outstanding career as a record-setting quarterback at Syracuse University, where Nassib finished first in all-time career passing yards and completions and second in touchdowns.

Most draft analysts have Nassib being selected in the second round, although some have him going even higher. Regardless of where he is chosen, it will make Nassib the third Syracuse quarterback ever drafted and the first since former Philadelphia Eagles’ star Donovan McNabb.

As he prepares for his huge moment, Nassib took a timeout to reflect on how his life has steadily risen to such incredible heights.

“I feel extremely blessed,” Nassib said. “I couldn’t tell you how many people I would have to thank for helping me get to where I’ve gotten to.”

Pressed to be more specific, Nassib lauded his parents and four siblings. He talked about Nathaniel Hackett, the offensive coordinator and quarterbacks coach at Syracuse. He recalled many of the teachers at Malvern that influenced him the most, guys like Chuck Chinici, Joe Redican, Paul Hornsleth, and Jim Rullo, Nassib’s varsity basketball coach.

And the legendary Jim Stewart, Malvern’s longtime teacher, principal and headmaster who retired last year after more than four decades of service.

“He’s such a great man,” Nassib said. “I admired the things he stood for, how he was with all of the students. We couldn’t have asked for a better person to lead the school.”

On Jan. 3 Nassib was invited to spend some time with the students at West Chester’s SS. Simon and Jude grade school,

Kindergartener Joseph Croce chats with Ryan Nassib when he visited SS. Simon and Jude School where he attended through fourth grade.

where Nassib attended until fourth grade before transferring to nearby St. Maximilian Kolbe through eighth grade.

He remarked to Simon and Jude parochial vicar Father Jeff Rott how small the school looked to him in contrast to how he remembered it at as a youngster, and he wanted to visit the library. Father Rott said Nassib was visibly appreciative of the various mementos given to him by the school.

“He’s a very good kid,” said Father Rott. “I have gotten to know him a little bit over the past few years and he’s a good person. You could tell how much it meant for him to meet the younger kids and how excited they were to meet him.”

Moving forward, Nassib pledged to maintain that sense of balance – never getting away from the core values he learned from his family and faith communities.

“I was always raised to stay humble,” Nassib said. “Growing up, our parents taught that humility is key. No matter how successful you become or how great people think you are, you always have to remember to focus on the important things in life.”

At Syracuse, Nassib consistently attended an 8:30 p.m. Mass. Nassib compared this with the pre-game Masses at Malvern Prep, after which he and his teammates always received a blessing. He is convinced that the combination of Mass and football is what has helped keep him grounded in his faith.

“I looked forward to going to Mass,” he said. “I went every week. It was a good time. It was held at the student center and a lot of students went. It was definitely an important part of my experience at Syracuse.”

Nassib recognizes that, in many ways, the stiffest challenges of life await him in the near future.

No matter what happens, the affable 6-foot-2 inch, 229-pounder promises to maintain an even keel.

“Trust me, I understand the opportunities that I have, and I won’t take them for granted,” Nassib said. “I will do things the right way. If (professional football) works out, great. If not, I have my education to fall back on.”

The NFL is about to become a better league.

NEXT: Baseball great Stan Musial dies at 92, leaving memories of ‘The Man’