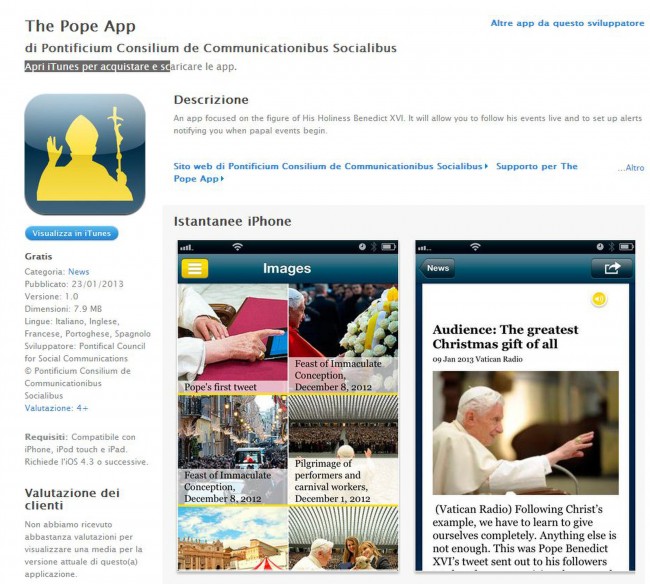 VATICAN CITY (CNS) — The Vatican launched a new “Pope App” on the eve of the release of the pope’s World Communications Day message, which is dedicated to social networks as important spaces for evangelization.

The new app provides live streaming of papal events and video feeds from the Vatican’s six webcams. It sends out alerts and links to top stories coming out of the Vatican’s many news outlets, and carries words and images of Pope Benedict XVI.

“The Pope App” went live Jan. 23 for iPhone and iPad, while an Android version is expected to be ready at the end of February. It’s currently available in English, Spanish, French, Portuguese and Italian.

The Vatican has been stepping up its digital presence in recent years — the latest example being the papal Twitter feed @Pontifex, which has attracted more than 2 million followers in nine languages since its debut Dec. 12.

The new app will also allow people to follow live broadcasts of papal events — such as the Sunday Angelus and Wednesday general audience — from any mobile device or smartphone. Users will receive an alert when an event is about to begin.

“The Pope App” was launched the day before the feast of St. Francis de Sales, patron of journalists, when the Vatican traditionally releases the pope’s message for World Communications Day.

The theme of this year’s message, “Social Networks: Portals of Truth and Faith; New Spaces for Evangelization,” is linked to the Year of Faith and Pope Benedict’s latest calls for a new evangelization.