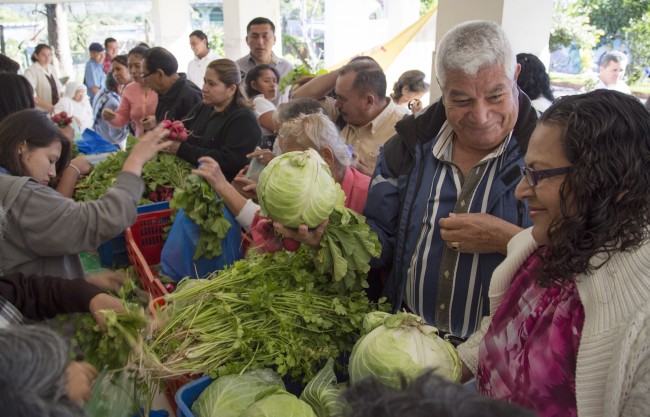 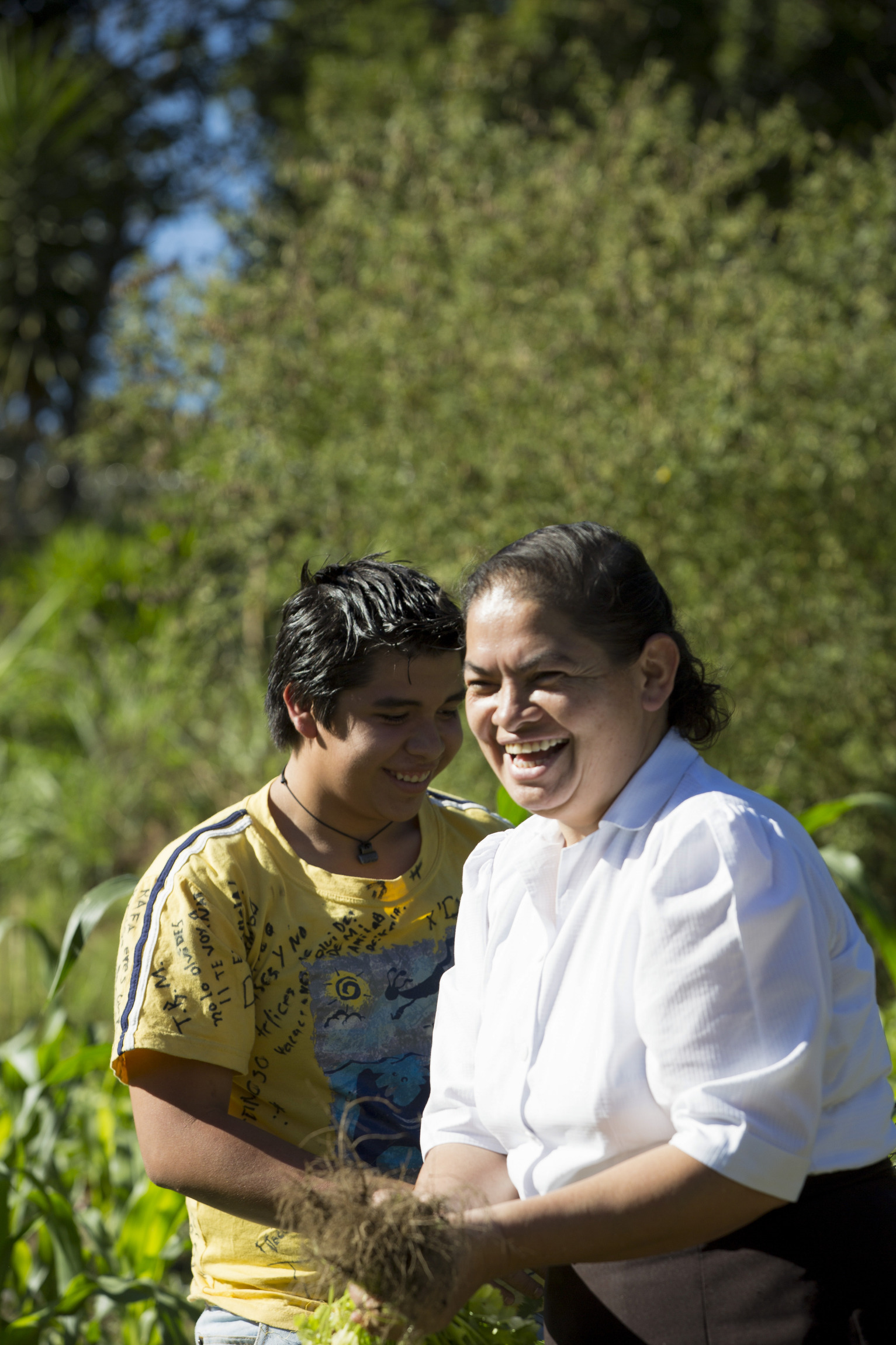 Sister Elsy Gaytan and Rafael Antonio Rivas, 15, share a laugh as they work in the fields at the Home of Divine Providence in Santa Tecla, El Salvador. Operated by the Carmelite Missionary Sisters of St. Therese, the home and its sustainable agricultural program serves 32 orphan children and teens and provides organic food to local consumers. (CNS photo/Edgar Romero)

SANTA TECLA, El Salvador (CNS) — Dressed in her brown habit, Sister Elsy Gaytan walks through a field among rows of cabbages, pointing to the crisp green crop sprouting from the earth.

“The motto of our institution is God will provide, and indeed He is providing,” she said.

Sister Elsy is the coordinator of Home of Divine Providence, an orphanage that has started a sustainable agriculture project that will feed not only the 32 children who live there, but also allow the Carmelite Missionary Sisters of St. Therese, who oversee the home, to reach local consumers with organic products.

The orphanage, located in Santa Tecla, about eight miles west of the Salvadoran capital of San Salvador, has been a haven for children since it was founded in 1984 by the order in the midst of the country’s civil war. The war ended in 1992, but the orphans kept coming.

Archbishop Oscar A. Romero, who was shot to death by assassins in 1980 for his vocal opposition to violence at the hands of the Salvadoran military, was one of the most enthusiastic supporters of the idea for the orphanage. He donated funds to build the institution that now encompasses a 12-acre compound.

“He gave us a check three days before he was murdered,” Sister Elsy told Catholic News Service.

The agriculture project started in July 2011 with funding from DKA Austria, a Catholic children’s movement, and technical support from the Foundation for Socio-Economic Development and Environmental Restoration.

The sisters had grown vegetables and raised animals for years, but the foundation’s experts convinced them that sustainable agriculture would be a better approach and encouraged the sisters to start applying organic production techniques. Good results have begun to show.

The foundation’s staff introduced three varieties of grass that provide high levels of protein, so the sheep reach the proper weight of 90 to 155 pounds for lamb production.

The nuns also are planning to acquire a machine to produce organic concentrate from corn, legumes and minerals to feed the goats and boost goat milk production by up to 80 percent.

The legumes enrich the soil with nitrogen, making it more productive, said Israel Morales, an agricultural engineer for the foundation.

“We re-integrated into the land the remains of what we grow or produce,” Morales said. “Even the chicken feathers enrich the soil.”

A biodigester, which breaks down organic material biologically in an oxygen-free tank, already is installed. It will produce methane gas from animal manure that can be used for cooking, saving the orphanage about 30 percent on its natural gas costs.

Pests are fought with plants that naturally repel insects. A variety of ants devours worms that attack tomato crops.

“We want to be self-sustaining and provide our children healthy and environmentally friendly food,” Sister Elsy said.

But self-sustainability has not been achieved yet. Much of the food for the orphanage’s residents must be purchased with limited financial resources. Without donations from solidarity organizations, the orphanage would not survive, she said.

An important component of the project is the creation of the Organic Consumers Network, which seeks to spread the virtues of organic products and teach 100 families in the surrounding community the basic techniques of growing vegetables in their own gardens.

“Instead of roses or carnations, these families have grown at least a square meter with two or three vegetables,” Morales explained.

In El Salvador, production and trade of organic food are not widespread yet, but small farmers have slowly begun to break into the market. The sisters hope the orphanage joins them.

When not attending classes in the community school, the children immerse themselves in agricultural activities, learning how to grow vegetables or raise goats and rabbits.

“We also want to offer them ways of learning, so that we deliver good people to society,” she said.

Tania Perez, 15, came to the orphanage when she was 8 because her mother, an alcoholic, could not care for her, and her family was too poor to pay for schooling. Now she dreams of becoming a veterinarian.

“I think everything I’m learning here will help me for my future,” she said while taking a short break in the activity of the day: coffee picking.

In addition to orphans, the institution welcomes children at risk of falling into street crime in one of the most violent countries in the world.

Rafael Sandoval, 15, has lived at the orphanage since he was 6, an age at which he was already involved in gangs and without family support. Now he sees a brighter future and wants to become a biologist or a psychologist.

“Here we are learning to be someone in life,” he said.

NEXT: Lack of faith can hurt marriage, may affect validity, pope says