Before conclave, Cardinal Rigali lists qualities cardinals will seek in electing next pope 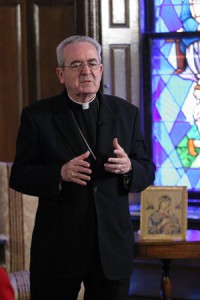 Philadelphia’s Archbishop Emeritus, Cardinal Justin Rigali, was just as surprised as everyone else by the almost unprecedented Feb. 11 announcement by Pope Benedict XVI that he would resign from the papacy at 8 p.m. Rome time, Feb. 28.

Cardinal Rigali has been living in retirement in the Diocese of Knoxville as a guest of Bishop Richard F. Stika, who was his secretary and later vicar general when then-Archbishop Justin Rigali was Archbishop of St. Louis.

“Bishop Stika came to my room to tell me, I was shocked,” Cardinal Rigali said at a Diocese of Knoxville press conference held on the day of the Pope’s announcement. “When I read the pope’s statement I saw his reasons for resigning and it made great sense. He is 85, approaching his 86th birthday … We all know the extraordinary issues he has to face day in and day out, so he very candidly said, ‘I had been thinking about this and I am now convinced the role of successor St. Peter is so involved, I don’t have the strength.’ This was beautiful, because he certainly gave his all in everything that he did.”

After the press conference Cardinal Rigali was scheduled to leave Knoxville for a planned pilgrimage to the Holy Land, and after his return to Knoxville on or about Feb. 21, he would then prepare to leave on a Feb. 26 flight to Rome, for what was to be a Feb. 28 meeting.

The meeting has been cancelled in view of Pope Benedict’s planned retirement that day, but it is nevertheless imperative for Cardinal Rigali to go to Rome. Although he officially retired as Archbishop of Philadelphia in July 2011, as a cardinal he remains an elector in the College of Cardinals, until his 80th birthday in April 2015.

Of the 11 American cardinals who will attend the upcoming conclave, he is the oldest.

He well remembers the last conclave, when Cardinal Joseph Ratzinger was elected pope, taking the name Benedict XVI. The date was April 19, 2005.

One by one the cardinal-electors knelt before the new pope and proclaimed their fidelity to him and to the Church. As he rose, Pope Benedict said, “Happy Birthday.”

“He floored me, he absolutely floored me,” Cardinal Rigali said at the news conference.  “With everything going on – he had just been elected pope 30 or 40 minutes ahead of that and he had the presence of mind to do that. He has maintained that through his whole pontificate. He happened to be elected on my birthday.”

In answer to a questioner who asked what qualities the cardinals will be looking for as they choose the next pope, Cardinal Rigali said, “We are looking for an awful lot. The ideal candidate would have everything, but he is human and he is not going to have everything.

“He is first of all, going to be the Bishop of Rome. He is going to be pastor of the Universal Church with all that entails, so just imagine the qualities that are needed.”

Also, “the question of languages is not without consideration. Since the pope is pastor of the Universal Church he has to communicate with people. Pope Benedict certainly was very good at languages and Pope John Paul II was even more so; he had an extraordinary capacity to speak languages.”

Ultimately, “You try to get the man who has the best combination of these qualities possible but you are not going to get anybody perfect,” he said. “It is not easy to run the whole Church but they are going to get somebody with the help of God.”

NEXT: Permanent deacons to see changes for ministry, formation in Archdiocese