St. Donato Parish to merge with Our Lady of Lourdes in West Philadelphia 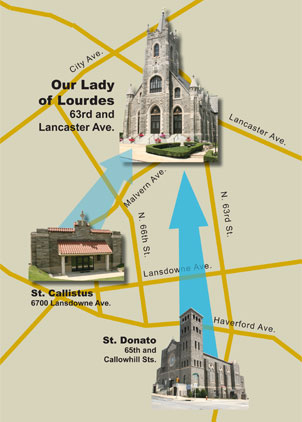 West Philadelphia’s St. Donato Parish, an Italian personal parish in Pastoral Planning Area 600, will merge with Our Lady of Lourdes Parish, it was announced at weekend Masses Feb. 2-3.

In the merger Our Lady of Lourdes will retain its name and parish status, while St. Donato Church at 65th and Callowhill streets will become a worship site for occasional use, according to a statement by the Archdiocese of Philadelphia released Feb. 4.

St. Donato Parish was established in 1910 during a period when Philadelphia was experiencing a huge influx of Italian immigrants. St. Frances Cabrini, herself an Italian immigrant, visited the following year for the opening liturgy for the parish school, which was staffed by her Missionary Sisters of the Sacred Heart.

The school itself is now St. Frances Cabrini Regional School, which will not be affected by the parish closing, according to the archdiocesan statement.

The merger of the parishes, whose churches are located only 1.25 miles from each other, becomes effective Feb. 24.

Last month St. Callistus Parish also merged with Our Lady of Lourdes, at 63rd St. and Lancaster Ave., one of other announced mergers in West Philadelphia. They included Our Lady of the Blessed Sacrament merging at St. Cyprian and Our Mother of Sorrows merging at St. Ignatius of Loyola.

The closure of St. Donato was approved by Archbishop  Charles Chaput at the recommendation of the Archdiocesan Strategic Planning Committee. It studied a number of factors including demographic shifts in Catholic populations, concentrated density of parishes in a limited geographic area, history of declining Mass attendance and sacramental activity, increasing economic challenges that threaten sustainability, a decrease in the availability of clergy to staff parishes, and a review of facilities.

Attendance for the three Masses on a typical weekend at St. Donato’s, based on head counts in the church during Masses in October, was 169 in 2011, down from 241 in 2007. Over the years St. Donato was the site of approximately 14,000 baptisms and approximately 5,100 weddings. While the number of baptisms and marriages remained virtually unchanged over the latest five-year period, they were few in number, with seven baptisms and six marriages in 2011.

In that year Our Lady of Lourdes had 18 baptisms but only five marriages.

But the parish welcomed 819 worshipers for Masses on a typical weekend in 2011, up from 675 in 2007. Part of the reason is that it offers five Masses, including a 8 p.m. Sunday night Mass, and a morning “high Mass” in the extraordinary Latin rite that draws people from across the area.

Without such a merger, the archdiocesan statement said, St. Donato Parish “would not have been self-sustainable in the future.”

St. Donato Church currently hosts two Masses on Sunday morning and one on Saturday evening. It will remain open as a worship site “for the time being” and may be used for weddings, funerals, and feast days, as well as traditional and ethnic devotions for at least one year during the transition, the statement said. Sunday Mass may also be celebrated there at the discretion of the pastor and the newly formed pastoral council.

All parish property, assets and debts of St. Donato Parish will be assumed by the Our Lady of Lourdes, which will also hold all sacramental records. The pastors from the merging parishes – Father Ferdinand Buccafurni of St. Donato’s and Mercedarian Father Michael Rock — will form a transitional team made up of lay leaders from each of the parishes to help build the new parish community.

The Archdiocesan Strategic Planning Committee, made up of lay persons, priests and archdiocesan personnel, is examining all parishes within the Archdiocese to gauge their viability and assess whether they possess the resources to accomplish their role in the mission of the Church and remain sustainable and vibrant faith communities.

Parishes within each pastoral planning area will continue to examine their viability in order to make future recommendations. St. Donato and Our Lady of Lourdes are within Pastoral Planning Area 600.

According to the statement, the goal of the pastoral planning process is to provide pastors, after consulting their parish leadership, with the opportunity to dialogue with members of the Strategic Planning Committee in providing joint recommendations to the Archbishop for growth and sustainability within their respective geographic areas.

Additionally, in the majority of cases, the regional bishop and the dean meet with the pastors as well as their pastoral and finance councils to hear their concerns and receive their recommendations.

The Archdiocesan Strategic Planning Committee shared all final proposals with the Council of Priests and the College of Consultors for their review before final approval by the Archbishop.

Announcements on the decisions regarding parishes in three areas – Northeast Philadelphia, Northwest Philadelphia and a portion of Delaware County– are expected in the spring.

Two other parishes in West Philadelphia’s PPA 600 that remain under study are St. Barbara and St. Rose of Lima.

NEXT: Lent begins this week, Archbishop to celebrate Ash Wednesday Mass at Cathedral