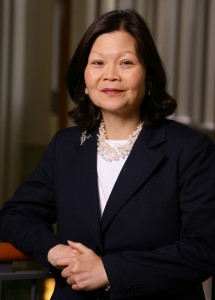 Carolyn Y. Woo, president and CEO of Catholic Relief Services, is urging presidents of Catholic colleges to make sure students are equipped for faith-based global outreach. Woo addressed the group at the Association of Catholic Colleges and Universities’ conference Feb. 3. (CNS photo/Matt Cashore, courtesy of University of Notre Dame)

WASHINGTON (CNS) — Carolyn Woo, president of Catholic Relief Services, wants to see graduates of Catholic colleges become more involved in service — globally and even locally within their own parishes — and said university presidents should do more to make sure this happens.

“Young people love to volunteer,” she said, but what she “finds missing” from them is a “lifelong commitment” to the poor and a sense of “responsibility for building up the church.”

Woo spoke during the Feb. 3 plenary session at the annual meeting of the Association of Catholic Colleges and Universities in Washington.

She said students hunger for the “inspirational challenge” to help others and said she believes “we as elders may not have given enough energy” to encourage them.

Woo, who took the helm of CRS a year ago, previously served as dean of the Mendoza College of Business at the University of Notre Dame. CRS is the Baltimore-based overseas and development agency of the U.S. bishops.

She said that while she was dean, she often wondered if the school was doing enough to form students in the faith. She would question if the graduates would be courageous enough, if they would know how to use power and if their faith was strong.

She said Catholic colleges and universities should not just be competitive with other schools but should be distinctive because of their Catholic mission and thus be able to prepare graduates for service-oriented work. The key, she said, is in how Catholic social teaching is presented, which she feels is currently falling short.

Woo urged college leaders to make sure the teaching does not get short shrift. “Students must know what it stands for,” she said. She also noted that campus ministers cannot assume that students already have knowledge of it because many do not. Citing recent studies, Woo said many young people simply equate God to a “divine butler or a nice uncle.”

Woo urged college leaders to help their students “connect the dots” in terms of what the church can do in its outreach in health, education and care for the poor.

New York Cardinal Timothy M. Dolan, who also spoke at the plenary session, stressed that Catholic college students need to know why they are doing service. He said they could “ladle soup or put a roof on a house but they need to be formed by and interior knowledge of — and allegiance to — the faith.”

He said there has been more emphasis recently on “making students aware of the frailty of society” and getting them “to commit to the common good.”

NEXT: Appeals court sides with manufacturing company against HHS mandate