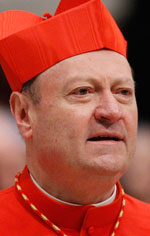 VATICAN CITY (CNS) — A prominent voice at the Vatican in the run-up to the papal election, Italian Cardinal Gianfranco Ravasi is a well-known biblical scholar who can quote just as easily from Sufi poets, Dante and Danish philosophers as he can from sacred Scripture.

The 70-year-old president of the Pontifical Council for Culture has been leading the universal church’s efforts to develop a nonconfrontational dialogue with nonbelievers, trying to make Christianity intelligible to the modern mind and build a reason-based consensus on key moral issues.

He had the ear of Pope Benedict XVI and many cardinals when he led the meditations during a weeklong Lenten retreat at the Vatican the week before the pope resigned Feb. 28.

It wasn’t the first time Pope Benedict showed favor on the Scripture expert by choosing him for the Lenten reflections; he also chose the cardinal to compose the commentary and prayers of the Good Friday Way of the Cross service in Rome’s Colosseum in 2007.

Since he became council president in 2007, Cardinal Ravasi has transformed the way a Vatican office works.

He bolstered the visibility and accountability of his staff by assigning a department to each council official, making them individually responsible for each of the council’s many endeavors such as art and faith, science and faith, economics, and sport and culture.

Cardinal Ravasi was serving as the prefect of the Milan Archdiocese’s Ambrosian Library when Pope Benedict named him to head the culture council. He was already well-known in Italy as a prolific writer, a magazine columnist and a longtime host of a religious program on a major national Italian television station.

When he was appointed, he said he would continue the council’s work of using culture as a bridge for dialogue between people of other faiths and traditions. Instead of cultures and religions engaging in a duel, they should be part of a “duet, like in music, when two voices remain different, but harmonious,” he said after his appointment.

He also oversaw the revamping the council’s website with more news and visuals, including video.

He is very active on Twitter and has a popular following with different accounts in Italian, Spanish and English.

Although the Lenten meditations for the pope are not open to the public, Cardinal Ravasi tweeted snippets of his reflections and let all 17 meditations be posted as podcasts.

Even though Cardinal Ravasi is a scholar with little direct pastoral experience, he does not hesitate when it comes to outreach.

In a bold effort to involve young people in explaining directly to church leaders what young people were thinking and feeling, in February he launched a meeting on youth cultures with a concert by an Italian rock band and invited a small group of young people to participate in the weeklong meeting.

During the 2008 Synod of Bishops on the Bible, Cardinal Ravasi was the principal author of the synod’s final message. He told reporters that “if the word of God is love, then one who has read and prayed over the word must incarnate love. It must lead to communion, solidarity and dialogue.”

Under his tutelage, the council partnered in 2011 with NeoStem, Inc., a U.S. company researching and marketing adult stem-cell therapies to promote research and discussion about the therapeutic promise of adult stem cells.

The cardinal is best-known for coordinating the “Courtyard of the Gentiles” project. He spearheaded the initiative after the pope proposed the idea in 2009 as a way to promote dialogue among agnostics or atheists and people of the Catholic faith.

Cardinal Ravasi said the key to dialogue not only with atheists, but also with people of other faiths, is strengthening one’s own Christian beliefs.

It’s a shaky or fundamentalist grasp of faith that sparks suspicion or fear of the other, he said, adding that “oftentimes this fear (of dialogue) stems from the fact that the person doesn’t feel capable of defending or justifying his own reasons, hence he doesn’t want to listen to the other.”

European Christians will not be able to coexist peacefully and dialogue constructively with their growing Muslim residents until they bolster their own sense of their Christian roots, he said.

Crucifixes displayed publicly in Italy, including in classrooms, are a sign of Christianity’s key contribution to European culture and civilization, the cardinal said in 2011.

In every culture, he said, people find symbols that express their identity and, in losing those symbols, “we run the great risk of losing our identity.”

“Having white walls leads to a void, to cultural fragility. You may need to explain what a religious symbol means, but it isn’t right to have to take down your symbols simply to avoid offending someone,” the cardinal said, referring to European-wide efforts to rule that classroom crucifixes were a violation of religious freedom.

Born in the northern Italian town of Merate Oct. 18, 1942, Gianfranco Ravasi was ordained to the priesthood for the Archdiocese of Milan in 1966. He studied at the Pontifical Gregorian University and the Pontifical Biblical Institute in Rome and taught biblical exegesis at the Milan archdiocesan seminary and another theological school in northern Italy.

The cardinal served as a member of the Pontifical Biblical Commission from 1985 to 1995. In 1989, he was named prefect of Milan’s Ambrosian Library, a library and museum complex originally founded in the early 1600s, which houses academies offering classes in a variety of classical and historical subjects.

Cardinal Ravasi also serves as president of the pontifical commissions for the Cultural Heritage of the Church and for Sacred Archaeology.