Indian cardinal says next pope must be holy, intelligent, courageous 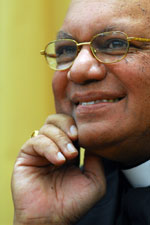 VATICAN CITY (CNS) — Indian Cardinal Oswald Gracias of Mumbai said he will look for a new pope who is holy, intelligent and courageous and has “a breadth of vision” for the universal church and its role in the world.

Since Pope Benedict XVI said he planned to resign Feb. 28 because of age and a lack of the energy needed to fulfill the papal ministry, Cardinal Gracias, 68, said age could be a factor “to some extent, but I don’t think it will be the deciding factor.”

Cardinal Gracias spoke by telephone with Catholic News Service Feb. 25, two days before he was scheduled to arrive in Rome to say farewell to Pope Benedict and begin the process of electing a successor.

The cardinal said, “It was an absolute surprise, shock and sadness,” when he heard the pope had resigned. “I thought it was not true, but I checked with the nunciature.”

“I couldn’t believe it, although now I’ve come to accept it,” Cardinal Gracias said. “Looking back, it does make sense, because I know Pope Benedict loves the church very much and he would not want the church to be disadvantaged in any way because of any ailment or age-related debility on his part. He wants the very best for the church and would do anything for it.”

Cardinal Gracias said that while age will not be a major factor in choosing the next pope, “we’ll be careful” about choosing one who is healthy and has stamina. “I can see the tensions of office are so demanding, being the spiritual head of the church and spiritual head of the world in a sense. He is listened to worldwide.”

People keep asking him if it is time for an Asian pope, the cardinal said.

“When I take part in the conclave, I will look for one who — irrespective of where he comes from — is very holy, very intelligent and has really a world vision, a breadth of vision, a person of compassion, who can reach out to people and a person with courage, unafraid to speak the truth and face criticism for the sake of the Gospel.”

Cardinal Gracias was one of more than 50 cardinals who will enter the conclave just months after having participated in the world Synod of Bishops on the new evangelization.

Before entering the conclave, the cardinals will meet for several days to discuss the needs of the church, much, he said, as synod members did in October.

The synod, he said, “really touched that point: what does the church need today, what should the church do, what sort of leadership,” he said.

“On the other hand,” the pope’s resignation “came like a bolt. I don’t think a single cardinal would ever have imagined that this would come so soon.”

The cardinals at the synod “didn’t even look around” at each other as potential candidates, which would have been natural if they had had an inkling they would be electing a pope so soon, he said.

Cardinal Gracias said he hoped the conclave would begin March 10 or 11 so that the cardinals could be back in their dioceses for Palm Sunday.

PREVIOUS: Papal biographer: Fixing Vatican bureaucracy is a top job for next pope