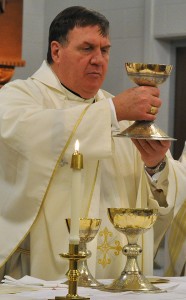 Archbishop Joseph W. Tobin of Indianapolis, who worked in the Roman Curia, believes reform of the curia “is a reasonable priority to have.” (CNS photo/Sean Gallagher, The Criterion)

INDIANAPOLIS (CNS) — Since Pope Benedict XVI announced his resignation Feb. 11, various commentators on church affairs — and also some church leaders — said that reforming the Roman Curia needs to be a priority of the next pontiff.

Archbishop Joseph W. Tobin, who was named to Indianapolis last October and has several years of firsthand experience of working in and with the curia, said such reform “is a reasonable priority to have, not so much to avoid scandals, but to provide for a government that will help the Holy Father exercise his Petrine service.”

“What I was able to do as a non-Italian was to encourage (Italians working in the Roman Curia) to think beyond the (Italian) peninsula,” said Indianapolis Archbishop Joseph Tobin, who previously worked in the Vatican. “If you don’t make an effort to have an international curia, it’s very easy, and with goodwill, to slide into all the issues of the Church and the state in Italy.”

“That’s a struggle for a bureaucracy that has been around for the better part of two millennia,” he added in a Feb. 21 interview with The Criterion, the archdiocesan newspaper.

At the same time, Archbishop Tobin takes a balanced view when reflecting on the curia — something he said he didn’t always do in the past.

“As one who used to severely criticize the curia before I worked there, I was told by one historian that you have to remember that curia saw the church through world wars and depressions and kept it going, even when there wasn’t a pope,” he said.

He served in the curia as secretary of the Congregation for Institutes of Consecrated Life and Societies of Apostolic Life from 2010 until his appointment to lead the Archdiocese of Indianapolis.

Before that, he often worked closely with the curia when he served as superior general of the Congregation of the Most Holy Redeemer, known as the Redemptorists, from 1997 to 2009.

“My experience is that there’s a lot of goodness in the Roman Curia, a lot of people who are very devout Catholics,” he said. “But there are structures and trends that blunt the effectiveness of the curia.”

One of those trends, he said, is the tendency of Italians to dominate the staffs of the various Vatican offices.

Although the congregation he served has a Brazilian cardinal as its prefect and formerly him, an American, as the person second in charge, Archbishop Tobin noted that the majority of its approximately 40 staff members were Italian.

“What I was able to do as a non-Italian was to encourage them to think beyond the (Italian) peninsula,” he said. “If you don’t make an effort to have an international curia, it’s very easy, and with goodwill, to slide into all the issues of the Church and the state in Italy.”

This tendency could sometimes lead, Archbishop Tobin said, to the congregation getting involved to an unnecessarily high degree with matters dealing with religious orders in Italy.

“I would often say to my colleagues who would want us to intervene in a situation in Italy, ‘Would we do that if the same thing happened in Rwanda?’ or ‘Would we want to be as concerned about this if it was happening in Brazil?'” he said. “And I would say, because we dealt with religious orders, that we are not the super-provincials of Italy. We help religious life in Italy, but we are concerned with it across the world.”

He also noted that the trend of filling the curia with Italians increased during Pope Benedict’s papacy in part because of the management of the Vatican’s secretary of state, Cardinal Tarcisio Bertone.

But internationalizing the curia, including its lower level positions, can be challenging, Archbishop Tobin said.

He noted that it can happen in part only “if dioceses are willing to part (with priests) and if the Holy See is willing to pay.”

“In a certain sense, it’s much more economical to employ Italians. There are a lot of reasons for that,” Archbishop Tobin noted. “We also use Italian for the working language. A lot of very talented people just don’t want to learn Italian and don’t want to work in that kind of environment, which is unfortunate.”

He also noted that Pope Benedict may have chosen to resign now, as his own strength is diminishing, to avoid problems with the curia that happened in the final years of the pontificate of Blessed John Paul II when his deteriorating health made it difficult for him to take decisive action in curial affairs.

Archbishop Tobin said that there is “some truth” to the belief that there was some “inertia” in the curia in the years leading up to Pope John Paul’s death in 2005.

Gallagher is a reporter at The Criterion, newspaper of the Indianapolis Archdiocese.