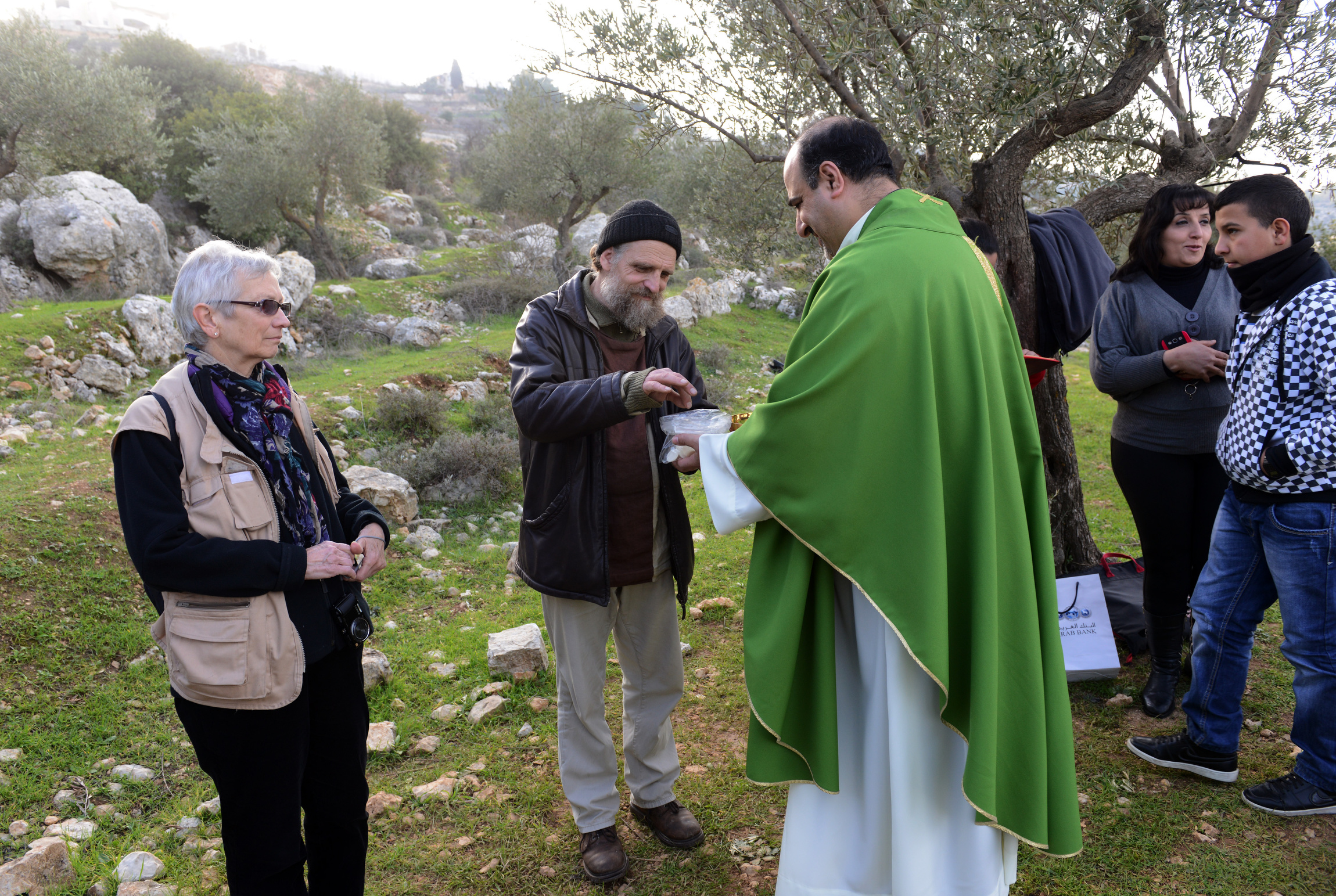 BEIT JALLA, West Bank (CNS) — Just over the ridge, not far from where Father Ibrahim Shomali celebrated Mass on a recent Friday afternoon, is the Israeli settlement of Har Gilo.

Nearby, across the Cremisan Valley, is Gilo, another Israeli settlement. It was built decades ago on land that was part of Beit Jalla, a largely Christian Palestinian town six miles south of Jerusalem and three miles west of Bethlehem. Israelis consider Har Gilo and Gilo neighborhoods of Jerusalem.

Between the two settlements, hidden behind trees, is a 150-year-old community of Salesians. The priests and brothers there run the West Bank’s only winery, the Cremisan Cellars. Not far away is the convent of the Salesian Sisters of Cremisan, who operate an elementary school and after-school programs for 400 children.

As near as they are, the two religious communities may end up on opposite sides of an extension of the Israeli-Palestinian separation barrier.

On Feb. 12, the Israeli Supreme Court heard Israel’s appeal to extend the barrier, a series of cement slabs, barbed wire fences and security roads snaking across part of the valley. It would effectively separate Beit Jalla from the two Israeli settlements, creating a contiguous strip of land that could be used for expansion and their eventual joining.

If built according to one option proposed by the Israeli army, the wall would isolate the fathers and brothers’ residence on the Israeli side of the wall, separating it from the convent and Beit Jalla. It would surround the village of Wallajah, where many of the students live.

Under another army proposal, both religious communities would be on the Israeli side, separated from the people they serve in Beit Jalla. The school’s students would be forced to go through a military gate to attend classes.

Israel maintains the wall is needed for security reasons.

The wall also will separate 57 Christian Palestinian families from their agricultural lands, the last green area left for expansion of the city, Father Shomali said. According to Israeli law, if agricultural land is not cultivated for a certain amount of time, the state can expropriate it.

Every Friday for the past 18 months, Father Shomali has transported a small wrought-iron table in his car down the winding road from Beit Jalla to the men’s residence, where he celebrates Mass with a desire for peace in his heart.

“We don’t use the Mass to protest but to pray,” he explained. “The only thing left for us is to pray to God. We ask God to do something for us, and when we ask God we also ask his followers all over the world to at least know about our case.”

Under an earlier plan for the wall, which the nuns successfully opposed two years ago, the convent was to be on the Israeli side of the barrier, separating it from the community they serve. The children would have been forced to go through a gate to get to school.

In a statement posted Jan. 7 on the website of the Franciscan Custody of the Holy Land, the Salesian men and women reiterated their opposition to the wall. The statement denied a Dec. 31 report in the Israeli Ha’aretz daily in which a nun was quoted as saying the fathers and brothers preferred to be on the Israeli side of the barrier because of their winery.

“The Salesian sisters and the Salesian male religious of Cremisan clearly affirm that there is no discord among them whatsoever and that their positions with regard to the building of the ‘wall’ do not differ,” the statement said. “The two religious communities are autonomous in organizing their own activities in favor of the local population but have always had and still enjoy excellent relations and mutual respect.

“They have always expressed their opposition to the building of the ‘wall’ and, in ways deemed most appropriate, have also shown solidarity with the Palestinian families of Beit Jalla who, because of the construction of the ‘wall,’ suffer injustice and are deprived of land which is their property,” the religious communities said.

“We are in the same boat as the people of Beit Jalla,” Salesian Father Giovanni Laconi, provincial vicar, recently told a group of visiting bishops. “We didn’t know we became part of the Jerusalem municipality (until the phone company came here.) The wall will go right through our courtyard. Suddenly we found ourselves in Israel. … We are quite annoyed. Beit Jalla is our home.”

The sisters declined a request for an interview.

Attorney Manal Hazzan-Abu Sinni of the Society of St. Yves, a Catholic human rights organization handling the case for the sisters, said an injunction prohibits construction of the barrier until the Supreme Court rules.

“We are not delusional that this is the only wall around Jerusalem, but we have the opportunity to battle the construction of the wall here because of the importance of the two (Catholic) institutions in the area and uncover the hypocrisy of the security claims which accompany it,” she said.

Hazzan-Abu Sinni said the nuns could be cut off from 75 percent of their land, and the men’s residence could become isolated.

The inclusion of a gate staffed by soldiers, as suggested by the Israeli army, is an unsatisfactory solution, she added, because access to the land will be at the discretion of the soldiers. Parents, she said, do not want their children to pass through a military checkpoint to get to school.

Hazzan-Abu Sinni contended that the Cremisan route for the barrier would allow for expansion of the two settlements. She said that six months ago, Jerusalem officials issued tenders for expansion in the area.

“We don’t argue that the Israeli people should not be able to protect themselves, but not at the expense of the Palestinians (in Beit Jalla,)” she said. “The clear reason for choosing the Cremisan area is … so they can get their hands on the land.”

For Beit Jalla resident Ricardo Hanni, 57, an English teacher and Catholic, Father Shomali’s weekly Mass is the last bit of solace left as he faces losing five acres of olive trees, which he said have been in his family for hundreds years.

At first many of the families whose land was at stake attended the Mass, but slowly most have lost hope, he said.

“I haven’t lost hope,” he said, glancing at his land. “I always pray to God, and maybe God will hear us.”

For now Hanni’s children are in Beit Jalla, but he fears that their future is being taken away because they will have no land on which to build homes of their own.

“I’ll never be able to buy another piece of land,” he said. “But I am always telling my children they must stay here. This is our land, our people, our life.”