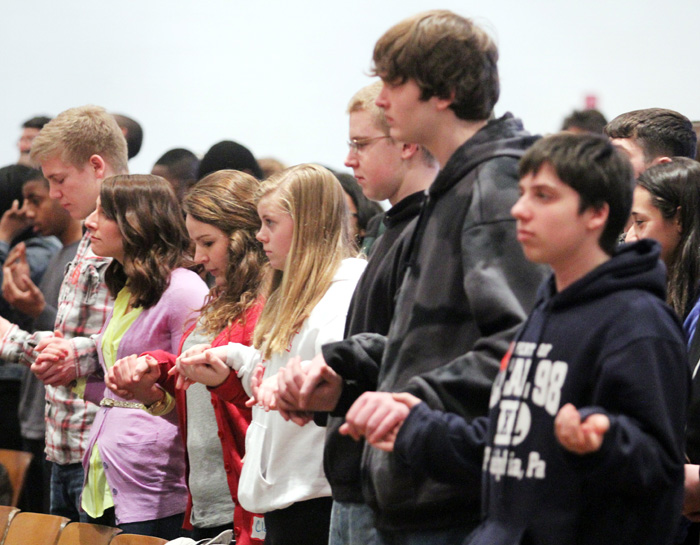 Approximately 200 teens and their adult chaperones enjoyed a day of exploring the Catholic faith, and having fun too, March 3 at Archbishop Carroll High School, Radnor.

Formerly the archdiocesan Teen Convocation, the event was renamed Generation Phaith this year by the young people themselves, who helped organize the day of workshops, prayer, music and games.

Organized by the Office for Catechetical Formation of the Archdiocese of Philadelphia, the day kicked off with an introduction by the office’s director, Father John Ames. He turned the microphone over to the entertaining and humorous master of ceremonies, Scott Anthony, a youth minister from a Catholic parish in York, Pa.

“The teen rally was organized so that the teens could come together for an experience of faith, to ‘say yes’ to the faith,” said Beth Riordan of the catechetical formation office, echoing the theme for the day. “They got to know each other through workshops and as a young church in Philadelphia.”

Workshops included the West Chester-based organization Generation Life speaking to separate groups of boys and girls about issues of masculinity and femininity that they face respectively. Others included talks on vocations and prayer.

These afternoon workshops were followed by a holy hour with benediction of the Blessed Sacrament, which Riordan characterized as a moving and impressive witness of Catholic faith.

That was what the whole day was about, after all: “to give a Catholic faith witness in their life and at school, even in a Catholic school, which sometimes is not easy,” Riordan said.

The day ended with Mass celebrated by Bishop Daniel E. Thomas and the homily preached by Father Daniel Kredensor, a teacher at Carroll High School.

The teens, and especially their strong faith, impressed Riordan.

“We experience that faith in the Catholic Church, and they want to know the love of Jesus Christ in the Church.”