High court: Definition of marriage less a focus than who’s defining it 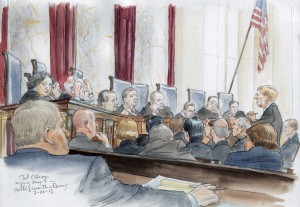 WASHINGTON (CNS) — In its second day of oral arguments about aspects of laws related to same-sex marriage March 27, the Supreme Court spent little time discussing the actual definition of marriage, focusing instead on issues of jurisdiction, state’s rights, motives behind the federal Defense of Marriage Act and timing.

The highly anticipated cases — United States v. Windsor March 27 and Hollingsworth v. Perry March 26 — have stirred effusive national interest over whether the court will definitively rule on the legality of same-sex marriage. But the direction of both days of oral arguments focused little on what the definition is and more on who has the authority to define it.

As it did the day before, questioning from the justices reflected skepticism about the law being reviewed. Justice Anthony Kennedy, who often holds the deciding vote in close cases, joined Justices Stephen Breyer, Ruth Bader Ginsburg, Sonia Sotomayor and Elena Kagan in suggesting the Defense of Marriage Act, or DOMA, creates two classes of marriage in the country, those recognized by the federal government and those that are not. Ginsburg described the difference as that between regular milk and a “skim-milk marriage.”

The court spent nearly a full hour considering the unusual situation of DOMA being defended before the court by members of Congress, not the federal government, which typically would defend a federal law. It then moved onto the merits of the claim that a New York woman should not have had to pay a higher rate in inheritance taxes because she inherited the estate from her wife.

DOMA was passed by Congress and signed into law in 1996. It said no state or political jurisdiction is required to recognize a same-sex marriage from another jurisdiction. Its Section 3 defines marriage as between one man and one woman for the federal government’s purposes, such as for Social Security benefits, federal programs, and federal estate and income taxes.

In 2011, when a handful of states had legalized same-sex marriage and about 30 had banned it, the Obama administration announced that the attorney general had determined that Section 3 is unconstitutional as applied to legally married same-sex spouses. The administration said federal agencies should continue to enforce the law, but that the government would no longer defend it in court.

Because the administration is not defending DOMA, its defenders in this proceeding are a group of members of Congress, known as the Bipartisan Legal Advisory Group of the U.S. House of Representatives, known as BLAG.

Another unusual wrinkle in the case is that while on one level it is a dispute between a taxpayer and the federal government, on another, the top federal trial lawyer, the solicitor general, is arguing that DOMA is unconstitutional.

The law is being challenged by a New York woman, Edith Windsor, who inherited the estate of her wife, Thea Spyer, upon her death. The pair were partners for 40 years and married in Canada in 2007. When Spyer died, Windsor had to pay $363,000 in federal estate taxes. Had her spouse been male, she would have been exempted from that tax.

The U.S. Conference of Catholic Bishops was among about 30 organizations that filed friend of the court briefs in support of DOMA. Another 45 filed briefs arguing that DOMA should be overturned.

The USCCB said there is “no fundamental right to marry a person of the same sex. … Specifically, civil recognition of same-sex relationships is not deeply rooted in the nation’s history and tradition — quite the opposite is true.”

A day earlier, the court heard oral arguments in another case over same-sex marriage. Hollingsworth v. Perry addresses issues specific to California, where voters in 2008 approved a constitutional amendment barring same-sex marriage a few months after the state Supreme Court said it was unconstitutional to limit marriage to pairs of a man and a woman.

Questioning by the justices raised the possibility that they might toss out that case on the issue of standing, namely whether the people who put the ballot measure together have a legitimate right to stand up for the amendment in court.

Another possibility raised by the justices is that it’s too soon for the court to decide whether same-sex marriage is constitutional. Justice Samuel Alito noted that the country had been debating the issue for less time than than people have been using cellphones or the Internet.

Rulings in both cases are expected to be issued before the court adjourns for the term in late July.