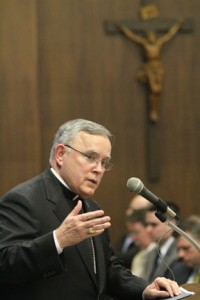 Archbishop Charles Chaput was just as surprised as almost everyone else by the March 13 election of Argentinean Cardinal Jorge Mario Bergoglio as Pope Francis, but nevertheless pleased.

“Pope Francis, the former Cardinal Bergoglio, is a man from the new heartland of the global Church; a priest of extraordinary intellectual and cultural strengths,” the archbishop said in a statement yesterday.

The pope is “a man deeply engaged in the issues of contemporary life and able to speak to the modern heart; open to the new realities the Church faces; and rooted in a deep love of Jesus Christ,” the archbishop said.

As Archbishop Chaput explained in a hastily called news conference at St. Charles Borromeo Seminary, he’d gone to Malvern Retreat House that morning to address a priests’ retreat and have lunch with them. He was in a car returning home and stuck in traffic when the news came over the radio that white smoke had come from the Sistine Chapel, indicating a pope had been elected in the unusually short time of two days.

“The fact that he was elected very quickly by the cardinals is, I think, a good thing because they quickly converged on him as a candidate,” the archbishop said.

Although Cardinal Bergoglio is rumored to have received the second most votes in the conclave that elected Pope Benedict in 2005, Archbishop Chaput suggested his name was not as prominent this time in pre-conclave speculation because of his age – 76.

“I noticed when his name was announced it was very quiet because people didn’t expect it. That was interesting. We are constantly surprised by how God acts in the world and I expect we will be surprised in the months and years ahead.

“I don’t think people were expecting it because of his age, but you saw when he came out on the balcony he certainly carries his 76 years with grace. I think he has a lot of energy and I think people are enthusiastic about this and I can’t blame them.”

Although Archbishop Chaput emphasized he does not personally know Pope Francis well, the two did meet in Rome when both were attending the 1997 Synod for America.  At that time, Cardinal Bergoglio complimented Archbishop Chaput on a speech he had given and gave him a picture of the Blessed Virgin Mary, which he still has on his desk.

(See the picture and article to which the archbishop refers, “Mary, Untier of Knots,” on Wikipedia.)

“It was a gathering of bishops from throughout the world to discuss the New Evangelization in the Americas, which means North and South America,” Archbishop Chaput said. “He certainly was impressive when speaking at that meeting. I think he has done a good job leading the local Church in Buenos Aires.”

A real asset, Archbishop Chaput suggested, is that Pope Francis is from Latin America and Spanish is his native tongue, in this age when Latin America has more Catholics than any other part of the globe.

“The fact that he speaks Spanish as his own language is a great blessing for them, and I think for the whole Church,” he said. “He brings an international dimension to the Church and this is a unique historical moment.”

As Archbishop Chaput said in his statement, Pope Francis “is a wonderful choice; a pastor God sends not just to the Church but to every person of good will who honestly yearns for justice peace and human dignity in our time. May God grant him courage and joy, and sustain him with His divine presence.”

NEXT: Philadelphia priest in Rome witnesses profound moment with 200,000 others