Between popes, a time of speculation and suspense 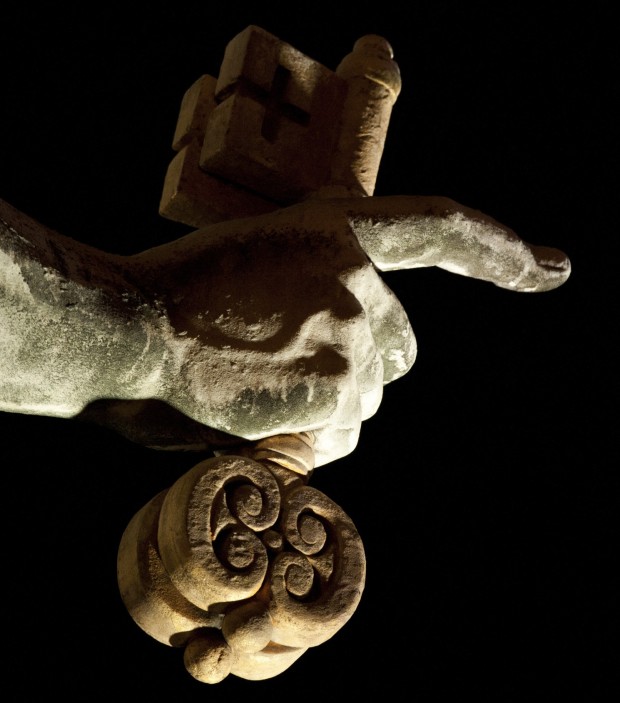 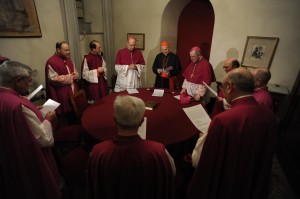 Italian Cardinal Tarcisio Bertone, center with red skull cap, prays with assistants as the ceremonies and tasks of the “sede vacante” begin at the Vatican Feb. 28. The red velvet-covered scepter before him is the symbol of his authority as camerlengo or chamberlain. He is charged with administering the temporal goods of the church following the resignation of Pope Benedict XVI. (CNS photo/L’Osservatore Romano via Catholic Press Photo)

VATICAN CITY (CNS) — The period immediately following a pontificate is one of excited speculation, more or less loose, about the identity of the next pope.

Though secrecy rules do not forbid cardinals from naming their preferences, custom and prudence effectively do. In any case, as history shows, once the electors get behind locked doors, their deliberations take on a dynamic impossible to forecast or affect from outside.

Such uncertainty makes a journalist’s job hard in one sense and easy in another, since practically any outcome is at least marginally plausible. That is especially the case this time, in the wake of an event — Pope Benedict XVI’s resignation — which a few weeks ago most observers would have dismissed as far-fetched.

Some conjecture about “papabili” is disinterested; much reflects a desire to provoke or entertain; and a fair amount is clearly wishful thinking. And then there are those who use the press to influence the cardinals, who read newspapers like everyone else and, in most cases, know little about each other as they arrive in Rome.

For members of the church, the interregnum is inevitably a time of suspense and even anxiety. A fear that the conclave might not choose the right man does not necessarily reflect a lack of faith. In 1997, then-Cardinal Joseph Ratzinger told an interviewer that the Holy Spirit does not “dictate the candidate for whom one must vote.”

“Probably the only assurance he offers is that the thing cannot be totally ruined,” the future Pope Benedict said. “There are too many contrary instances of popes the Holy Spirit obviously would not have picked.”

The almost unprecedented way in which Pope Benedict brought his own pontificate to an end has increased apprehension among some. In Italy and elsewhere, observers have suggested that his resignation was precipitated by the Vatican’s internal problems — if not the rumored wars among bureaucratic factions, then the corruption and mismanagement sensationally documented in the 2012 “VatiLeaks” of confidential correspondence. In this view, the former pope is not the only one who needs replacing.

Even if Pope Benedict had not left behind a Vatican surrounded by such controversies, his way of leaving was bound to create disquiet.

“One pope dies, you make another,” runs an Italian proverb, with the reassuring message that life goes on. But this time, the fact that life goes on makes things more complicated. The historic anomaly of a living former pope presents no theological or canonical difficulties for the church, but it will require an emotional adjustment from many of the faithful. 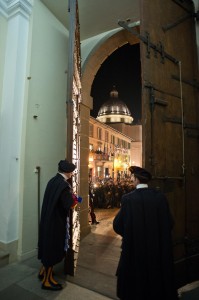 Members of the Swiss Guard close the main door of the papal villa at Castel Gandolfo, Italy, at 8 p.m. Feb. 28. The Swiss Guard concluded its protective service to Pope Benedict XVI, signaling the end of his papacy. (CNS photo/L’Osservatore Romano)

Pope Benedict has recognized that his resignation is unlike that of any other leader departing the scene. In the last two days of his pontificate, he pledged obedience to his successor and noted that he was leaving the “active exercise of the (Petrine) ministry.” He also said he was “not returning to private life” but would belong “always and totally to everyone, to the whole church” and “remain, so to speak, within St. Peter’s precincts.” Many will find these assurances both consoling and mysterious.

Catholics, whose ecclesiology calls for a pope to help preserve their unity, are in a sense orphans during a papal interregnum. And this time they have had no cathartic process of mourning and burial to help purify the complex emotions children feel upon losing a parent.

The Vatican has not said whether Pope Benedict, despite his promise to remain “hidden” in retirement, will take part in his successor’s Mass of installation. Were he to do so, it might add a new dimension to that liturgy — a symbolic passing of the keys — which might make the papal transition feel more complete.

Otherwise, until Pope Benedict’s funeral Mass — which one assumes the next pope will celebrate, in yet another dramatic innovation of papal tradition — the closest thing to ritual closure of the last pontificate will remain a moment shortly after 8 p.m. Feb. 28, when Swiss Guards at Castel Gandolfo slowly shut a pair of massive wood doors.

NEXT: Panel of lay Catholics weighs in with advice for electing new pope