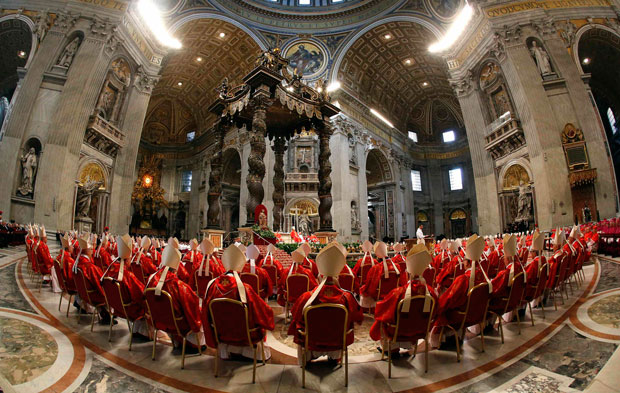 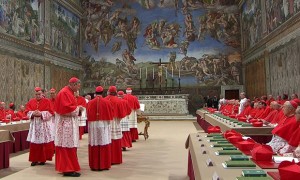 Cardinals from around the world are seen in the Vatican’s Sistine Chapel March 12 to begin the conclave to elect a successor to Pope Benedict XVI in a still image taken from video. Shut off from the outside world, the 115 cardinals will cast ballots to s elect a new pontiff. (CNS photo/Vatican CTV via Reuters)

VATICAN CITY (CNS) — Invoking the aid of the Holy Spirit and the holy men and women from all over the world recognized as saints, 115 cardinals processed slowly into the Sistine Chapel to begin the process to elect a pope.

Once in the chapel, the cardinals from 48 countries vowed that, if elected pope, they would faithfully fulfill the ministry of universal pastor of the church and would defend the rights and freedom of the Holy See.

They also solemnly swore to scrupulously follow the rules for the election of a pope and keep secret the results of the votes, unless they have express permission from the new pope to reveal details.

After reciting the oath together, each cardinal walked up to the Book of the Gospels, put his right hand on it, said his name and sealed his oath, “So help me God and these holy Gospels that I touch with my hand.”

The portion filmed by Vatican television ended with Msgr. Guido Marini, master of papal liturgical ceremonies, saying, “Extra omnes,” ordering out everyone not authorized to remain.

Among those staying behind was 87-year-old Maltese Cardinal Prosper Grech, an Augustinian priest and expert on the fathers of the early church. The cardinals had chosen him to give a meditation “on the problems facing the church” and “on the need for careful discernment in choosing the new pope.”

The afternoon events began in the Pauline Chapel in the Apostolic Palace, not far from the Sistine Chapel. The cardinals were dressed for prayer in what is described as “choir dress.” The 111 cardinals from the Latin-rite church wore red cassocks topped with the white, lace-trimmed rochet and the red mozzetta (a short cape). The four cardinals from Eastern Catholic churches wore the equivalent choir dress of their churches.

The average age of the cardinals entering the conclave was close to 72 years. Forty-eight of the 115 cardinals previously voted in the 2005 conclave that elected Pope Benedict XVI; for the other 67 cardinals, this was their first conclave.

Cardinal Giovanni Battista Re, the top-ranking cardinal elector, led the others in prayer, beginning, “May the Lord who guides our hearts in the love and patience of Christ be with you all.”

He told them, “The whole church, united with us in prayer, insistently invokes the grace of the Holy Spirit so that a worthy pastor for the whole flock of Christ would be elected by us.”

“May the Lord direct our steps in the path of truth so that, through the intercession of the Blessed Virgin Mary, the holy apostles Peter and Paul and all the saints, we would always do what is pleasing to him,” the cardinal prayed.

Chanting the Litany of the Saints, the cardinal electors began their walk to the Sistine Chapel, led by U.S. Cardinal James M. Harvey, archpriest of the Basilica of St. Paul Outside the Walls and the lowest in the church’s internal cardinal ranking.

They chanted requests that God would have pity on them, they asked the saints, archangels and ancient biblical prophets to pray for them. They invoked the aid of Christ, asking for his mercy and protection. They also prayed for the needs of those who have died and those threatened by hunger and war.

The cardinals asked God to give the world peace, to “comfort and enlighten” the church, help Christians reconcile with each other and to lead all people to the truth of the Gospel.

When they reached the chapel, the cardinals sang the ancient invocation of the Holy Spirit, “Veni, Creator Spiritus.”

The English version of the first verse usually is sung as: “Come, Holy Ghost, Creator blest, and in our hearts take up thy rest; come with thy grace and heavenly aid, to fill the hearts which thou hast made.”

Cardinal Re prayed that God would give the cardinals “the spirit of intelligence, truth and peace” so that they would know his will and serve it. 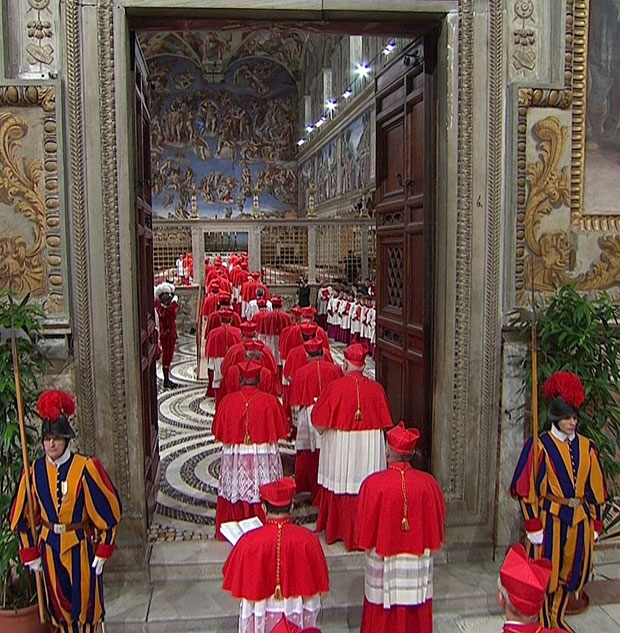 Swiss Guards are seen as cardinals from around the world enter the Vatican’s Sistine Chapel March 12 to begin the conclave to elect a successor to Pope Benedict XVI in a still image taken from video. Shut off from the outside world, the 115 cardinals will cast their ballots to select a new pontiff. (CNS photo/Vatican CTV via Reuters)

NEXT: How the papal balloting is scheduled to work