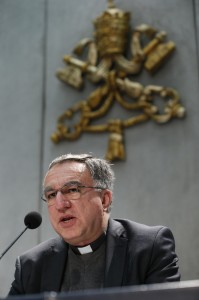 The Rochester, N.Y., native, founder and CEO of Salt and Light Television based in Toronto, has been assisting the English-speaking media at the Vatican Press office during the papal transition.

That means he provides English translations during news briefings led by Jesuit Father Federico Lombardi, Vatican spokesman and head of the press office. He also fields hundreds of questions from reporters each day and gives numerous interviews on radio, television and print explaining various aspects of the conclave.

The priest, who is used to being on the other side of the camera, said the transition has not been difficult. As he sees it, “The fundamental principle is always respect the person, whether you are asking or answering.”

He also views it as privilege to serve the church in this way and called it “an incredible experience” of “dealing with the world church.”

When asked why his translations of Father Lombardi’s explanations to reporters are often shorter and more concise than what reporters heard in Italian, Father Rosica said he does not always give an exact translation because the Vatican spokesman “likes to give long answers that the Italian media appreciate very much.”

On March 11, the day before the conclave began, he told Catholic News Service he had already received about 50 questions that morning from various media outlets. Often the journalists needed a sound bite during the news briefing, which he provides.

He said some reporters’ questions have “brought us great moments of laughter or pulling out one’s hair.” Questions have included “every possible imaginable thing,” he added.

The Canadian priest said he views the answers he provides as not just information, but as a “time to evangelize,” pointing out that there is “a huge amount of catechesis and evangelization going on through this.”

Along that same line, he said reporters have also asked if they could join him when he celebrates Mass. On March 10, a group of 15 journalists from television networks joined him for Mass, saying they wanted to pray with him.

“That’s the height of what we can do through this,” he said, noting that it is important that the press office provides “good information and transparency” but it should also be “inviting people to what this event is all about. Ultimately, this is a spiritual event that we’re experiencing here.”

He said one of his frustrations in this job has been working with some of the Italian journalists. The priest stressed that he is ethnically Italian and he loves Italy but he has been “appalled” at some of the reports from the Italian media.

He said he “didn’t expect to be so moved” by Pope Benedict’s departure, but as he and Father Lombardi watched the pope fly over Rome in the helicopter, they both had tears in their eyes.

“It was like a liturgy,” he said, noting that it reminded him of St. Paul bidding farewell to leaders of the church in Ephesus in the Acts of the Apostle.

“It was a very moving experience,” he said, which was immediately followed by debriefing reporters on what the symbols of the day meant — part of his everyday work.

NEXT: Cardinals enter conclave invoking aid of Holy Spirit, all the saints