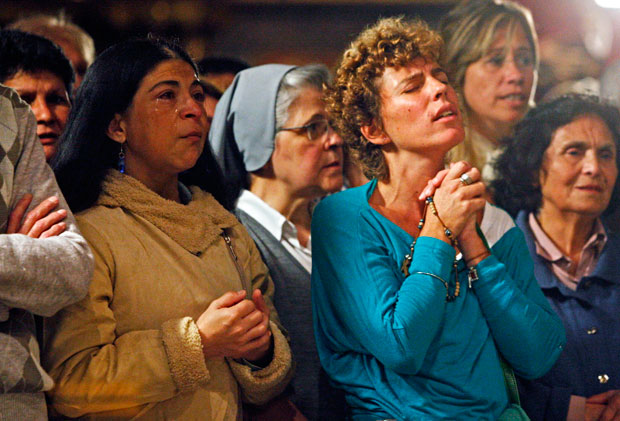 SANTO DOMINGO, Dominican Republic (CNS) — Latin Americans said the election of the first pope from the region is recognition of the role the global South plays in the church’s future.

Pope Francis, the 76-year-old Argentine who served as archbishop of Buenos Aires as Cardinal Jorge Mario Bergoglio, comes as both a surprise and a source of hope for Latin American Catholics.

“This is the news of the century. This is a moment of happiness for all of us,” Archbishop Oscar Vian Morales of Guatemala City told a news conference March 13. “We have received the news with great joy.”

Pope Francis, who reportedly finished second in the conclave that elected Pope Benedict XVI in 2005, has long advocated for a better life for Argentina’s poor, carrying a message of social justice that resonates in a region where roughly three in 10 people are poor.

“We’re very happy. … This is a man who has always represented the interests of the impoverished,” said Jesuit Father Jesus M. Sariego, representative of the Jesuit mission in Central America, based in El Salvador. “In terms of what this represents in the world, this is a signal of the importance and support” for our work.

While church participation wanes in areas of the world where it had long flourished, such as Europe, Latin America is home to nearly 40 percent of the world’s Catholics, and Africa is the church’s fastest-growing region.

“The global South is where the church should focus,” Father Sariego said. Although millions of Latin American Catholics have defected to evangelical sects or secularism, more than 70 percent remain Catholic. 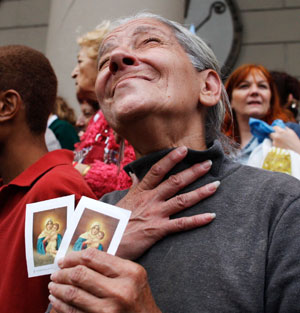 In Brazil, the world’s most Catholic country by population, Auxiliary Bishop Leonardo Steiner of Brasilia, secretary-general of the Brazilian bishops’ conference, said: “It is a moment of much happiness for all of us. We were surprised with the election of a Latin American pope.”

Brazil is home to roughly 124 million Catholics, or one of every 10 around the world.

“The choice of a Latin American shows that the church is opening up; that it is looking out for the (universal) church and not only for Europe,” Bishop Steiner said.

In the run-up to the conclave, speculation had mounted that Cardinal Odilo Scherer, archbishop of Sao Paulo, was a front-runner.

On March 13, inhabitants of the little town of Cerro Largo, where Cardinal Scherer was born, flocked to the church hall at the city’s main church when they heard about the white smoke coming out of the chimney at the Vatican.

“We were a little disappointed, but that does not mean we will not pray for the new pope,” Rozane Scherer, Cardinal Scherer’s cousin, was quoted by a Brazilian TV station as saying. “Scherer is still a young cardinal; we will continue to bet on him.”

Brazil will likely be Pope Francis’ first official international trip when he visits for World Youth Day in July.

In a statement, the organizing committee for the event — already expected to draw at least 2 million — said, “Young people around the world are happy with the ‘yes’ given by Pope Francis I and with his visit to Brazil in July for the (World Youth Day) in his first international apostolic trip.”

PREVIOUS: Jesuits surprised that first of their brethren is elected pope