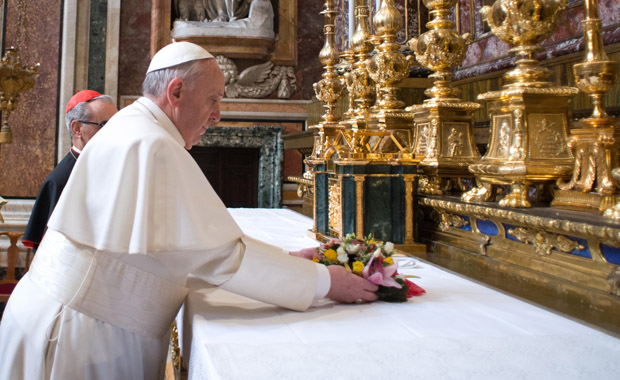 Newly-elected Pope Francis, Cardinal Jorge Mario Bergoglio of Argentina, leaves flowers in front of the “Salus Populi Romani,” (“Salvation of the Roman People”) a Marian icon in a chapel of the Basilica of St. Mary Major in Rome, March 14. (CNS photo/L’Osservatore Romano)

VATICAN CITY (CNS) — Pope Francis began his first full day as pope with an early morning act of Marian devotion — and by paying the bill at the clergy hotel where he had stayed before entering the conclave that elected him.

The new pope left the Domus Sanctae Marthae at 8 a.m. March 14 for a five-minute drive to the Basilica of St. Mary Major, where he prayed before an icon of Mary and the child Jesus beloved by Romans, the “Salus Populi Romani” (Protectress of the Roman People).

Pope Francis knelt in prayer for a while, then sat praying for several minutes before leaving at the altar the bouquet of flowers he had been carrying, said Jesuit Father Federico Lombardi, Vatican spokesman.

The spokesman said the pope paused in front of the basilica’s main altar, which is built over a reliquary containing, according to tradition, pieces of the manger where Jesus was laid as a baby.

“This is a significant place for the Jesuits,” he said. 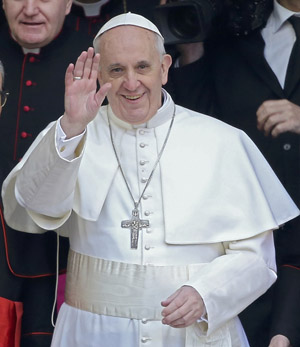 Afterward, riding in an unmarked police car rather than in one of the papal sedans, Pope Francis went to the Domus Internationalis Paulus VI, a hotel and residence for clergy, which is where he was staying before the conclave began March 12.

Father Lombardi said Pope Francis went to collect the suitcase he had left there. On the way out of the building, he stopped to greet the people who work there and “he paid his bill as a good example” to the other clerics.

The spokesman also told reporters March 14 that Pope Francis was wearing the simple pectoral cross that he’d had as a bishop and archbishop in Argentina.

In addition, he confirmed that the Vatican would be referring to the pope as “Pope Francis” and not “Pope Francis I.”

Father Lombardi also confirmed press reports that when Pope Francis was about 21 years old, he had undergone an operation to remove part of one of his lungs. In the 55 years since, he said, the new pope has enjoyed good and even robust health.

The new pope, like his recent predecessors, is a polyglot, the spokesman said. He speaks Spanish, English, Italian, French, German “and probably Portuguese,” he said, adding that if Pope Francis doesn’t speak Portuguese well now, he is likely to by July when he is scheduled to travel to Brazil for World Youth Day in Rio de Janeiro.

Pope Francis was scheduled to celebrate an evening Mass March 14 in the Vatican’s Sistine Chapel with the cardinals who elected him. Afterward, Father Lombardi said, he was to cut the seals on the papal apartments, allowing Vatican employees to begin the minor works foreseen before he moves in. 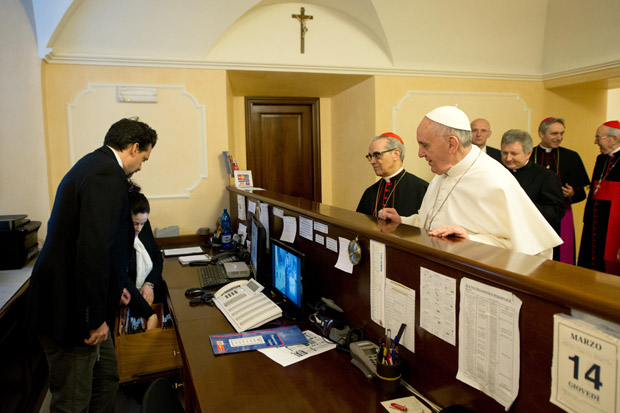 Newly elected Pope Francis checks out of the church-run residence March 14 where he had stayed in Rome. The pope returned to the residence where he stayed before becoming pontiff and insisted on paying the bill, despite now effectively being in charge of the business, the Vatican said. (CNS photo/L’Osservatore Romano)

NEXT: Who is Pope Francis?