Most cardinal electors in Rome, still no date set for conclave 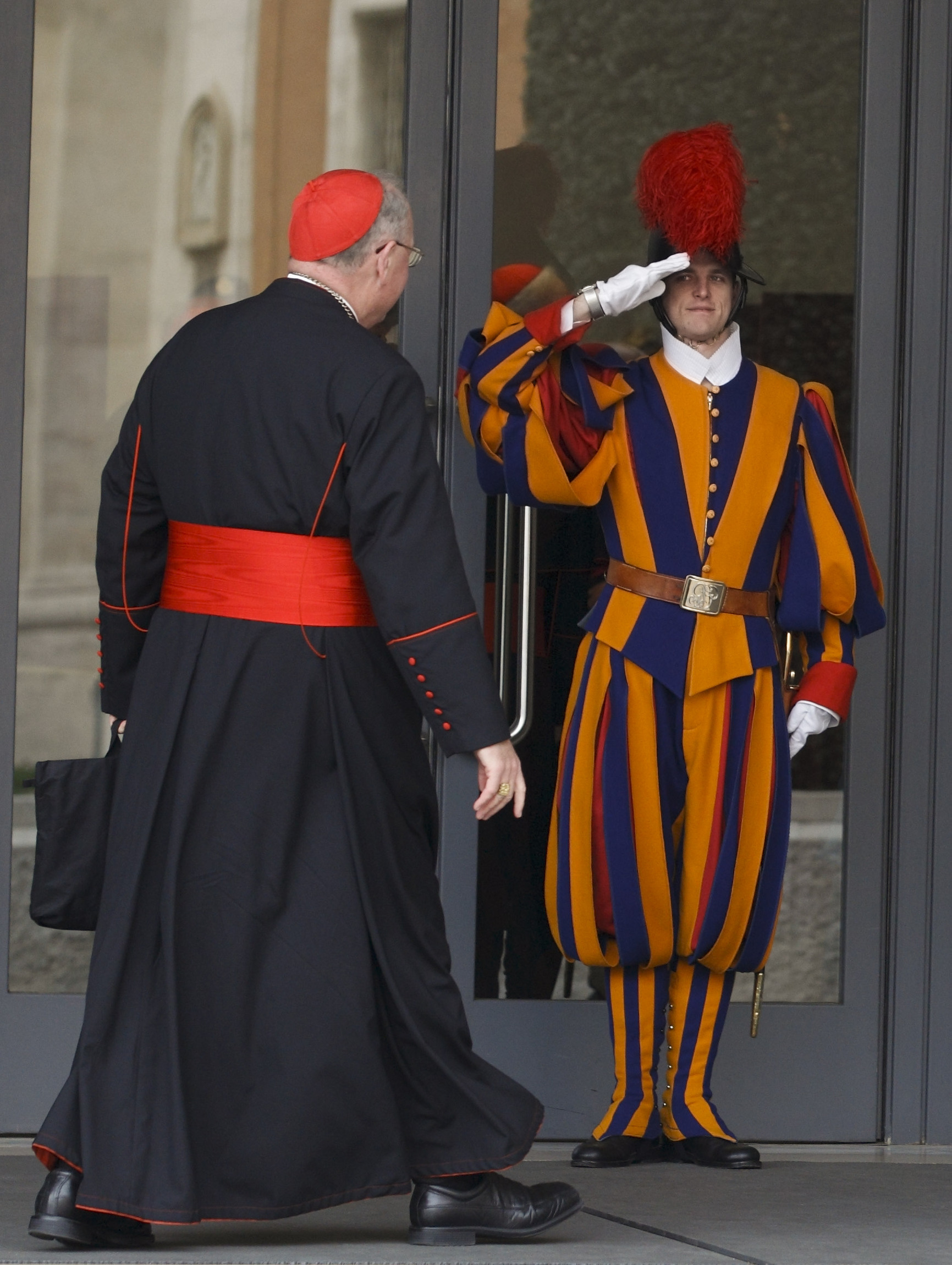 A Swiss Guard salutes as Cardinal Timothy M. Dolan of New York arrives for a general congregation meeting in synod hall at the Vatican March 5. The world's cardinals were meeting for several days in advance of the conclave to elect the new pope. (CNS photo/Paul Haring) 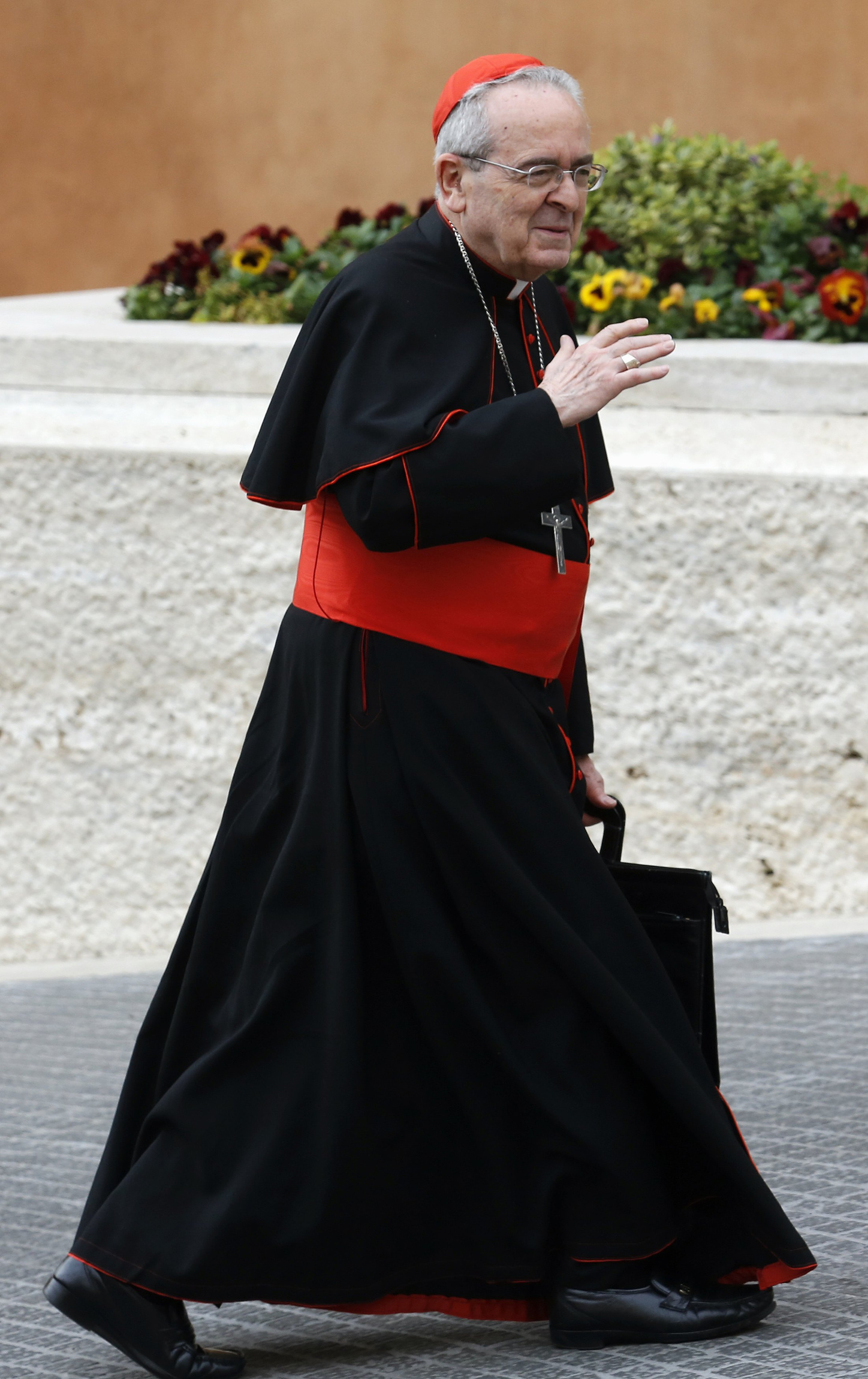 Cardinal Justin Rigali waves as he arrives for a general congregation meeting in the synod hall at the Vatican March 5. (CNS photo/Stefano Rellandini, Reuters)

VATICAN CITY (CNS) — After completing their third pre-conclave meeting, the College of Cardinals still had not announced a date for the conclave. Instead, they used the March 4 and 5 meetings to discuss needs of the church.

Jesuit Father Federico Lombardi, the Vatican spokesman, did not give specific details of the discussions because he is bound by an oath of secrecy to give only general information. He said March 5 the subjects were “broad and varied,” and included “the activity of the Holy See and its various dicasteries, their relationships with the bishops, the renewal of the church in the light of the Second Vatican Council, the situation of the church and the needs for new evangelization in the world, including in different cultural situations.”

He noted that by the end of the March 5 session, 33 cardinals “from every continent” had addressed the group. The meeting was attended by 148 cardinals.

Although he said the cardinals made “no decision” about the start of the conclave, there was a presentation that day about the modifications Pope Benedict XVI made to the conclave rules, allowing the cardinals to begin a conclave less than 15 days after the end of a pontificate.

“I did not hear them propose any specific day for voting on the date” for the conclave to begin, Father Lombardi said. “I believe that it is premature to guess the date.”

He also noted that the conclave date is “a theme that is open. The congregation of cardinals is still determining how long it will need to make adequate preparations for a decision as important as a conclave. They don’t want to rush things,” he added.

Father Lombardi also announced that the Sistine Chapel, where the conclave will take place, was officially closed to tourists beginning the afternoon of March 5 so workers could begin preparing it. The major work involves putting in a false floor so there are no steps, then putting in tables and chairs for the cardinals. Two stoves will be installed: one to burn ballots and the other to burn chemicals to create different colored smoke to let the public know if a pope was selected or not.

During the conclave, the cardinals will use three urns for the ballots. Video images of the urns, commissioned by the Vatican for the 2005 conclave, were shown to reporters during the March 5 news conference.

As of March 5, 110 cardinal electors had arrived in Rome, Father Lombardi announced.

The cardinals who had not arrived do not need to be present in order for the college to vote on a day to begin the conclave, provided the other cardinals know they will arrive by the starting date.

Father Lombardi said the cardinals who have yet to join the other cardinals had personal reasons for their delay but plan to arrive soon.

Father Lombardi said March 4 that only two cardinals — Indonesian Cardinal Julius Darmaatmadja, the 78-year-old retired archbishop of Jakarta, and Scottish Cardinal Keith O’Brien, 74, who retired as archbishop of St. Andrews and Edinburgh after being accused of sexual misconduct — have formally informed the Vatican that they will not attend the conclave.

The cardinals also accepted a proposal to conduct an evening prayer service March 6 at the Altar of the Chair in St. Peter’s Basilica, presided by Cardinal Angelo Sodano, dean of the College of Cardinals.

“The cardinals hope to give a good example of the call to the whole church to live in prayer this time of preparing for the important moment of electing a pope,” Father Lombardi said.

During the second day of pre-conclave gatherings, the cardinals also thanked Pope Benedict XVI for his “tireless work” and example of “generous pastoral concern.”

The telegram, dated March 5, was signed by Cardinal Sodano and sent on behalf of all the cardinals present.

The Vatican said 4,432 journalists had requested accredited just for the interregnum and conclave by March 4; they join some 600 reporters, photographers and videographers accredited to the Vatican permanently. The media represent 1,004 outlets from 65 countries and work in 24 languages, Father Lombardi said.

Contributing to this report were Cindy Wooden and Carol Glatz.

PREVIOUS: Panel of lay Catholics weighs in with advice for electing new pope

NEXT: Cardinals O’Malley, DiNardo: No rush to set date for conclave