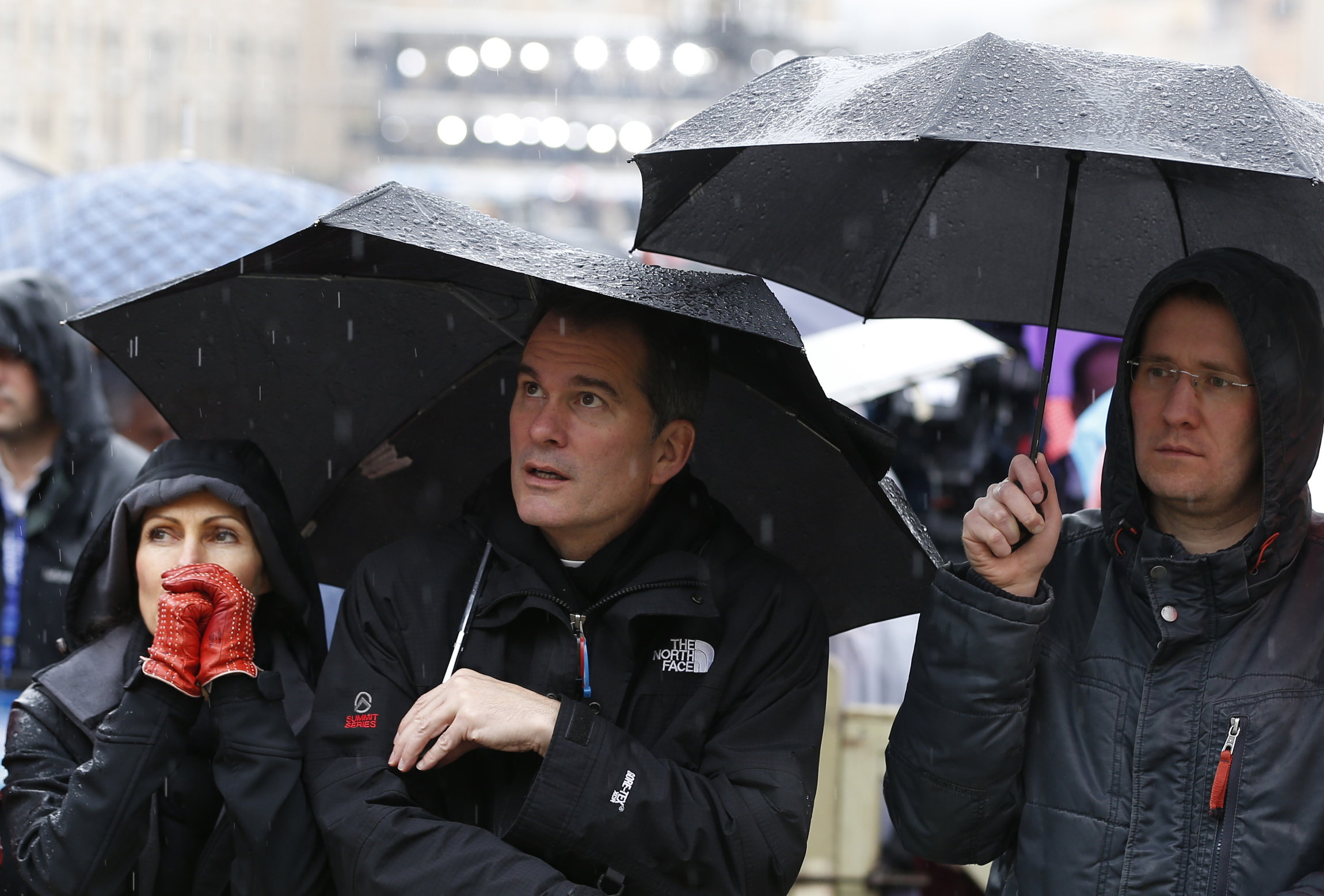 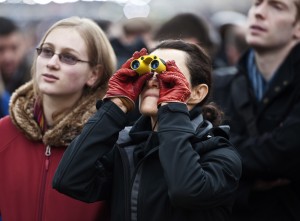 People in St. Peter’s Square watch and wait for a signal from the Sistine Chapel smokestack the morning of March 13 at the Vatican. (CNS photo/Marcin Mazur, Bishops’ Conference of England and Wales)

VATICAN CITY (CNS) — A second day of rain and cold couldn’t keep thousands of people from pouring into St. Peter’s Square to keep their eyes on a tiny chimney high atop a tiled roof.

Because of the inclement weather, most people waited until about 30 minutes before the smoke was expected to billow from a set of stoves in the Sistine Chapel, where 115 cardinal electors had gathered for the first round of voting March 12 and again after the second and third ballots March 13.

Marco Pazmino of Toronto said he and his wife, Maggie, “don’t mind the weather, because where we’re from the weather is not so great either.”

“We feel really lucky. It happens once in a lifetime, for us at least,” Maggie said.

The day ranged from hard rain and gentle drizzle to a rare burst of sun through the clouds. People came prepared with umbrellas and rain gear.

A large group of religious sisters sang in Spanish, while other people clustered in smaller groups of two or four people. There were few families given that it was a work and school day.

There was a huge rush of “Oh!” in the crowd when smoke came pouring out at 11:40, but as soon as it was apparent it was black, it segued into a disappointed “awww.”

“What a pity,” one woman said.

“Oh, well, must be patient,” another said to someone on her cell phone.

Carlito Ponseca and his wife, Courtney, were covered in plastic ponchos, while their sleeping 2-year-old child was tucked away in a rain-proofed stroller.

Ponseca said they actually planned their 10-day vacation to Rome to coincide with the conclave and papal election.

He said being in Rome was so important because he is originally from Manila and “It’s been several decades since we’ve had a ‘papabile’ from the Philippines, and now we have Cardinal Chito” Luis Tagle of Manila.

They were able to visit and speak with the cardinal before he headed into the conclave March 12 and, “We told him that we were praying for him.”

“He doesn’t want to hear that stuff (about being papabile), he is very humble,” he said.

Tens of thousands of people turned out in the cold and rain on the first night of voting March 12.

By 7 p.m., the square was largely full, many armed with umbrellas against the drizzle, some jumping up and down to keep their blood flowing in the chill. Some draped their nation’s flag over their backs and around their necks for added warmth.

The actual chimney was largely obscured in the dark, but large TV screens dotted around the square gave people a bright, close-up look.

Marist Father James Williams, who is studying in Rome at the Pontifical University of St. Thomas, known as the Angelicum, noted that “in an age of instant communication, there is a great comfort in knowing that everyone is staring at a smokestack.”

He said the process of electing a pope reflected the “continuity and consistency in God that we sometimes forget.”

The Long Island priest said he and his classmates had arranged that if anyone got the text message “W.S” for white smoke, they were to spread the word and run down to St. Peter’s Square.

Having a chimney and not a loudspeaker make the announcement “adds to the mystery; it’s more exciting,” said Sarah Kisby from Ipswich, England.

A small group of young women from Japan sang “Halleluiah,” while a more boisterous group yelled happily “Hey, let’s go!” Sporadic shouts and cheers sent shock waves through the crowds as people thought they were a signal for smoke.

But that would have to wait a while.

“For us, there is no excuse to not be here in the square,” said Deacon Spencer Howe of the Archdiocese of St. Paul, Minn., who is studying at the Pontifical North American College not far from St. Peter’s.

“You can really feel the energy tonight. Like Pope Benedict said (before his retirement Feb. 28), the church really lives, and you can see that here right now. People really have a desire to have and be led by a shepherd,” he said.

Some groups quietly said the rosary; some big groups sang and waved flags from Poland and Brazil. Farther back in the crowd, people were texting and talking on cellphones while they waited for the smoke to appear.

“I’m here to stand in prayer: I know it will not be easy (for the new pope) to accept this position. I am also praying for all those who are voting,” said Sister Regina, a School Sister of St. Francis, who said the rosary with Sister Kveta while they waited. 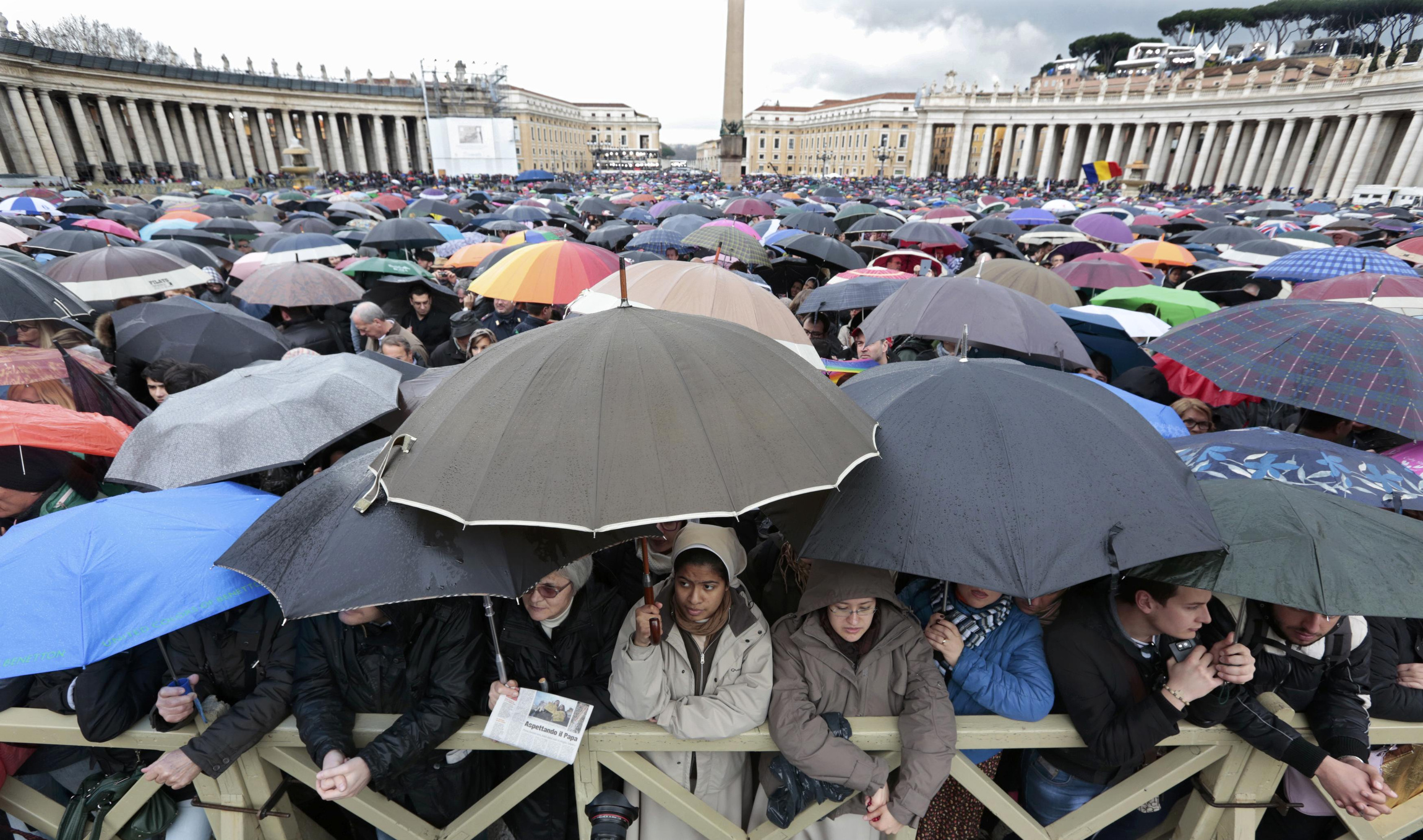 Pilgrims shelter from rain while waiting for smoke to rise from a chimney atop the Sistine Chapel March 13 during the second day of voting for the election of a new pope at the Vatican. (CNS photo/Eric Gaillard, Reuters)

NEXT: As seen in St. Peter’s Square