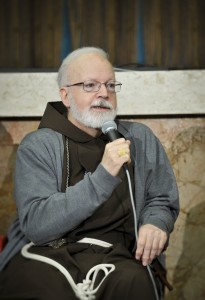 ROME (CNS) — After Pope Benedict XVI left the Vatican and began the last hours of his papacy, Cardinal Francis E. George of Chicago told reporters he already was considering the qualities of certain cardinals and what kinds of pope they would make.

“I would imagine each of us has some kind of a list of primary candidates and other secondary and tertiary,” the cardinal told reporters in Rome Feb. 28 as he and fellow U.S. Cardinals Sean P. O’Malley of Boston and Daniel N. DiNardo of Galveston-Houston met the press.

Because Pope Benedict had announced his intention to resign Feb. 11, Cardinal George said, the cardinals already had begun thinking of individuals they consider good candidates.

“There’s a likely list at this point — it isn’t winnowed yet — of people who might be considered candidates,” he said.

“It worries me intensely that people are making all kinds of judgments already when we’re really only at the beginning of this. I think we need to be patient. The Church is patient,” said Cardinal Daniel N. DiNardo of the Galveston-Houston Archdiocese.

In addition to the general meetings of the cardinals where the needs of the church are discussed, Cardinal George — who participated in the 2005 conclave that elected Pope Benedict — said there are “smaller, more intimate conversations” where the cardinals ask each other about specific cardinals they know or want to know more about.

He said they ask questions like, “What do you know about this candidate? And could you tell me how he would react to this? And what sort of person is he, what’s his personality?”

Cardinal George said the cardinals being named possible candidates in the news — “all of them that I’ve seen, unlike last time — are, in fact, good candidates.”

Asked whether Pope Benedict’s resignation at 85 would cause the cardinals to look for younger, healthier popes than they may have in the past, Cardinal O’Malley said, “I think it’s a little early to say what the long-term effect is going to be.”

He said the conclave could elect “an older man, realizing that he’s not going to have to carry on this burden into his 90s” because it would be easier to resign now that Pope Benedict has.

“Certainly, it’s a whole new ballgame after this resignation,” the Boston cardinal said.

The papacy is “an extremely demanding job,” he said, so it also “could result in the conclave choosing a younger man.”

Cardinal DiNardo said the cardinals are just coming to grips with the idea that a pope actually could resign, even though it always has been a possibility according to canon law.

At the same time, he said, the cardinals are not in the kind of rush news outlets are in and “it worries me intensely that people are making all kinds of judgments already when we’re really only at the beginning of this. I think we need to be patient. The Church is patient.”

Cardinal George said the question on his mind and probably the minds of most other cardinal-electors is who would be best suited for the papacy.

“The question of where he might be from or even his age follows after that, it’s secondary, not determinative,” he said.

As for how Pope Benedict’s resignation might change people’s understanding of the papacy, Cardinal George said it is too early to know.

In a family, the father is still the father even when he is old or ailing, he said.

“Function doesn’t count in a family, relationships do,” he said. “And the Church is a family, the family of God.”

Whether a person can function in the office of pope “now becomes a more important question than it was before,” he said, although it remains to be seen if that question will have a lasting impact on people’s understanding of the papacy.

NEXT: Mass at Cathedral offers prayers for papal election