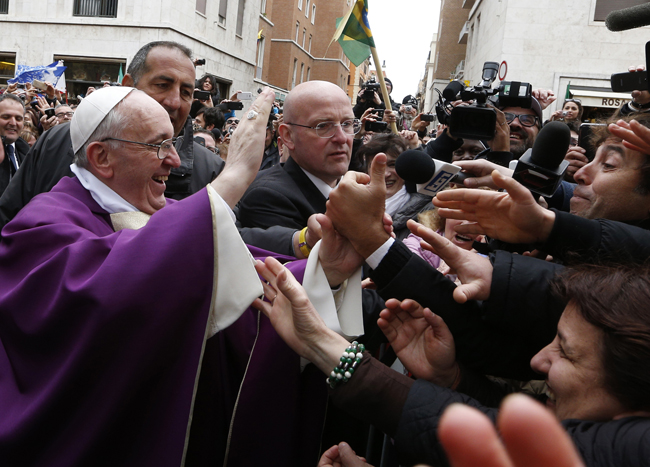 VATICAN CITY (CNS) — Pope Francis had been pope for less than six days when he was formally installed March 19, but he had already made a distinctive and overwhelmingly favorable impression on the world.

That is an especially remarkable accomplishment given that, until his election, the former Cardinal Jorge Mario Bergoglio had been practically unknown to the public outside his native Argentina.

His abrupt change in style from the previous pontificate has overwhelmingly charmed the press and the public. But among the hierarchy, off-the-record sentiments seem to be more mixed: admiration at the ease with which Pope Francis has assumed his new role, alongside doubts that he can or should keep up such an unconventional approach for long.

The new pope made an immediate impact with his extraordinary gestures of humility: bowing and asking the crowd’s blessing on election night, paying his own hotel bill and eschewing papal regalia such as red shoes and a gold pectoral cross; and with his displays of spontaneity, such as straying from prepared texts and stopping to greet the crowd on a Rome street.

Especially within the Vatican, there are surely many who inwardly regret the clear signs that informality will be the rule in this pontificate. After all, honors and decorations are among the few worldly rewards legitimately available to those in the hierarchy. More importantly, anyone who understands the significance of appearances in Italian and thus in Vatican culture understands that Pope Francis’ changes indicate a threat to something more vital than vanity.

Of the widely acknowledged priorities among the cardinal electors in the run-up to the conclave that chose Pope Francis, none was more prominent than the need to reform the Roman Curia, the church’s central administration. Sensational leaks to the press in 2012 documented corruption and mismanagement inside the Vatican, and in a speech during the cardinals’ pre-conclave meetings, then-Cardinal Bergoglio himself is reported to have denounced the practice of ecclesiastical “careerism.”

If the cardinals chose Pope Francis in part to play the role of curial reformer, they ignored a common argument that an Italian would be best prepared to deal with that largely dysfunctional culture. But as he reminded the crowd attending his first Angelus March 17, the new pope is of Italian origin. Though Argentina is a Spanish-speaking country, in other respects its culture owes as much to Italy as that of any other European country. At least in terms of his heritage, Pope Francis is obviously better prepared to understand and oversee his new collaborators than his Polish and German predecessors were.

As pastor of the universal church, a pope must consider how his gestures, statements and decisions will be received by the widest possible audience. Pope Francis’ shows of humility and accessibility plainly underscore his avowed desire that the church be close to the poorest and least powerful, a message he reinforced explicitly in the homily at his installation Mass.

To a more restricted and disproportionately powerful group of spectators, the new pope’s departures from Vatican protocol also send another, no less revolutionary message: that he knows what he thinks is right and will not hesitate to defy precedent or the instructions of others to act accordingly.

NEXT: Friendship began with soccer, led to improved Catholic-Jewish ties